The following are excerpts from an interview with the state-appointed executioner of Mecca in Saudi Arabia, Abdallah Al-Bishi. The interview aired on the Lebanese LBC TV on November 4, 2006. 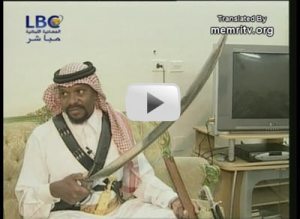 The following are excerpts from an interview with the state-appointed executioner of Mecca in Saudi Arabia, Abdallah Al-Bishi. The interview aired on the Lebanese LBC TV on November 4, 2006.

Reporter: “This is the most renowned executioner in Saudi Arabia, Abdallah Bin Sa’id Al-Bishi, who carries out the executions. His sword delineates the border between seriousness and play. There is no negotiating with him once the heads have ripened. When it’s harvesting time, he is the most suited for the job.”

Abdallah Al-Bishi: “I started to work in this field after the death of my father – about a week or 10 days after his death, in 1412 [1991-92]. I was surprised that the people who supervise this field summoned me, saying I had a mission. Allah be praised. Of course, I did not have swords or anything back then, but I used the swords of my father, may he rest in peace, and carried out the execution. My first mission was to execute three people.”

Reporter: “Abu Bader’s swords have cut off a hundred heads and more. His eldest son, Badr, is training in the same profession. He inherited this profession from his father, Sa’id Al-Bishi. He remembers how, when still a small boy, he accompanied him to the beheading of a criminal in Mecca. That sight, Abu Badr says, was the turning point in his life.”

Abdallah Al-Bishi: “I was at school, and an execution was set for my father in Mecca. It was to take place in front of the King Abd Al-‘Aziz Gate. Before all that happened at the Al-Haram Mosque, the executions were held there. We showed up. I was a little boy. The first thing that came to my mind when people talked about executions was the digestive system. I wanted to see it. At that time, we had an exam at school on the digestive system, and we had to explain about the digestive system and whatever… So I came along, and the moment my father executed the man, I ran to see the digestive system, but all I could see was the man’s head flying, and where the neck used to be, there was a kind of well. It went down. That’s it. I couldn’t take it anymore. I woke up in the car on the way home. At night, I tried to go to sleep, but couldn’t. I had nightmares, but only once. Then I got used to it, Allah be praised. “