While questioning Condoleezza Rice at yesterday’s Senate Foreign Relations Committee hearing, Sen. Barbara Boxer implied that Condi isn’t going to pay a personal price for sending more troops to Iraq because she is a single female: 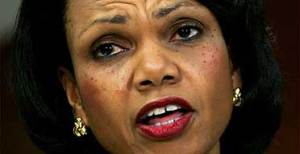 Not-so-subtle dig alert. According to Political Punch, Boxer’s office insists she was just trying to draw attention to the fact that few policymakers’ families are affected by the war in Iraq. But here’s my question: Would Sen. Boxer dare make this point to a single general without kids? Or another administration official, say, like Stephen Hadley (who has two teenage daughters) in a hearing? Aside from being in bad taste, it’s just egregiously petty politics. The insinuation here, whether intended by Sen. Boxer or not, is two-fold: 1) There must be something wrong with a woman who chooses not to have a family and 2) that such a decision brings into question the woman’s judgment.

There’s also some ugly foreshadowing here. Condi is going to increasingly face this question in the next few years if she has political ambitions. The fact that she isn’t married and has no children is a liability in American politics. It shouldn’t be, but it is. The second is Boxer’s insinuation that people without family members in the military may be less capable of critically judging a situation or more easily convinced to place troops in harm’s way. I’m no fan of the surge plan. But implying that because Condi doesn’t have a child of military age, she’s less qualified or incapable of comprehending the gravity of decisions is just hitting below the belt.

The U.S. Can Deter Iran but Not Its Proxies

For Russia, Impeachment Can’t Be Over Soon Enough

Hong Kong’s Greatness Is Slipping Away

What to Watch Today in Trump’s Impeachment Trial