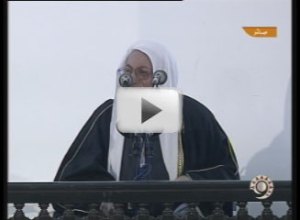 The following are excerpts from an address by Sheikh Yousef al-Qaradawi, which aired on Qatar TV on January 5, 2007:

I do not accept the trial of Saddam under American rule. This is not an Iraqi trial, but an American one. The Americans want to quench their thirst for vengeance against this man, whose neck they could not twist, and whose will they could not bend. This is the man who launched 39 missiles against Israel, and Israel has not forgotten this. This is the man whose nuclear reactor they destroyed, so that there would be no nuclear power in the region, whether peaceful or military, except for Israel. This is the man who adopted the Palestinian cause throughout his life. This is the man who said “No” to the Americans, and who never agreed to be blindly subservient or grovel. He could have settled for partial solutions, or to meet them halfway and show flexibility, and they might have been content with this – but this man refused. That is why the Americans insisted that he be tried and executed. Then, the death sentence was carried out on the holiday. The Americans denied responsibility for this, and their ambassador said: “I asked the Iraqi government to postpone the execution for two weeks, but the government insisted that it be carried out on the holiday.” Unfortunately, some of the [Shiite] religious and political leaders said that this was not their holiday, and that their holiday was celebrated the next day – on Sunday, not Saturday. Accursed be he who said this.