The world’s most famous gulag survivor apologizes for Putin 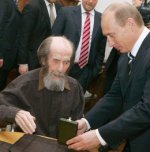 So I was surprised to read, in a recent interview with Germany’s Der Spiegel, Solzhenitsyn’s apologetics for Vladimir Putin, the man who is taking Russia back to the heyday of Soviet censorship (pdf). Why would Solzhenitsyn, an inspiration for dissidents everywhere and a past critic of Putin, do anything but bash the Russian president over his repressive policies and worsening human rights record?

It seems that even for Solzhenitsyn, who accepted a State Award from Putin in June, dictatorship is preferable to anarchy. When Putin came to power in 2000, Russians expected two things from their new leader: that he safeguard Russia’s territorial integrity, and that he reverse their country’s slide into chaos. Disintegration and internal implosion were seen as the unfortunate consequences of the Yeltsin era, with its wild economic liberalizations and breakneck federalist reform.

And so, Solzhenitsyn is merely echoing many of his compatriots when he tells Der Spiegel:

Putin inherited a ransacked and bewildered country, with a poor and demoralized people. And he started to do what was possible — a slow and gradual restoration. These efforts were not noticed, nor appreciated, immediately. In any case, one is hard pressed to find examples in history when steps by one country to restore its strength were met favorably by other governments.”

Solzhenitsyn’s interview makes for a great ironic contrast with Oleg Kalugin, a former KGB general who has harsh words for Vlad in today’s Seven Questions. When did the freedom fighter become the apologist for dictatorship, while the spy became the dissident?