Did you know that Encyclopedia Britannica has a blog? I didn’t either, but this week, Britannica Blog is hosting a discussion about U.S. policy toward Iran. The discussion, which lasts through Friday, features an odd assortment of analysts, from Michael Ledeen of the American Enterprise Institute to Scott Ritter, the outspoken former weapons inspector who ...

Did you know that Encyclopedia Britannica has a blog? 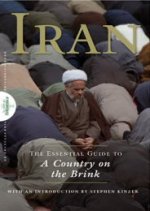 Did you know that Encyclopedia Britannica has a blog?

I didn’t either, but this week, Britannica Blog is hosting a discussion about U.S. policy toward Iran. The discussion, which lasts through Friday, features an odd assortment of analysts, from Michael Ledeen of the American Enterprise Institute to Scott Ritter, the outspoken former weapons inspector who famously warned all and sundry before the Iraq war that Saddam had no nuclear weapons. Ledeen and Ritter offer no surprises, for those familiar with their arguments: Ledeen wants “regime change” via a democratic revolution (fat chance), and Ritter says that Iran is not a threat to the United States and that the whole thing comes down to Israel and U.S. demand for oil in any case.

The most useful commentary comes from Wayne White, an adjunct scholar at the Middle East Institute who was, among other things, principal Iraq analyst at the State Department’s highly respected Bureau of Intelligence and Research from 2003-2005. Most of his post is a fairly straightforward synopsis of the state of play. But here’s an interesting nugget:

If the U.S. attacks Iran, for either reason, it would most likely do so during the days of maximum darkness in order to capitalize on its significant advantage in night warfare. That period begins around now and ends next March. The following winter, the president would be in office for only a portion of that militarily advantageous period, and also would have to consider the awkwardness of ordering an attack during an election campaign or in the period between the election and when he leaves office on January 20, 2009.

Unless last month’s IAEA “work plan” with Iran (aimed at clearing up some matters by November) shows real progress, offering genuine hope that the diplomatic logjam over nuclear enrichment can be broken, this December through March could be the first period during which U.S. military action against Iran becomes a real possibility. Because of the military considerations noted earlier, roughly the same period would be the most likely timing for a fairly robust and mainly aerial assault against IRGC targets inside Iran.

But as William Arkin notes here in a skeptical WaPo post on Seymour Hersh’s latest article about Iran, if the United State goes to war with Iran, “it will most likely be because Iran does something stupid.” As in, its proxy forces in Iraq kill a large number of U.S. soldiers and there is smoking-gun evidence that Iran is guilty. Is Iran that foolish? We’ll find out.

NEW FOR SUBSCRIBERS: Want to read more on this topic or region? Click + to receive email alerts when new stories are published on Military, Iran, Middle East and North Africa