The coming war in Sudan

Simon Roughneen writes in with an alarming report on last Saturday’s peace conference on Darfur:   MAHMUD TURKIA/AFP/Getty Images On Monday, United Nations (U.N.) and African Union (A.U.) mediators tried to put a positive spin on the failure of the latest Darfur peace talks in Sirte, Libya, after various splinter movements were the only groups ...

Simon Roughneen writes in with an alarming report on last Saturday's peace conference on Darfur:

On Monday, United Nations (U.N.) and African Union (A.U.) mediators tried to put a positive spin on the failure of the latest Darfur peace talks in Sirte, Libya, after various splinter movements were the only groups to show up to negotiate with a Sudanese government that has collapsed. Crucially, Darfur's major rebel groups, the Sudan Liberation Army (SLA) and the Justice and Equality Movement (JEM), were absent.

Simon Roughneen writes in with an alarming report on last Saturday’s peace conference on Darfur: 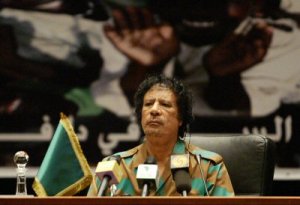 On Monday, United Nations (U.N.) and African Union (A.U.) mediators tried to put a positive spin on the failure of the latest Darfur peace talks in Sirte, Libya, after various splinter movements were the only groups to show up to negotiate with a Sudanese government that has collapsed. Crucially, Darfur’s major rebel groups, the Sudan Liberation Army (SLA) and the Justice and Equality Movement (JEM), were absent.

The meeting’s host, Col. Muammar al-Qaddafi, said that the world should cut Khartoum some slack over international peacekeepers since Darfur is nothing more than a tribal “fight over a camel.” This suits the ruling National Congress Party (NCP) of Sudanese President Omar al-Bashir just fine, as it implies that the proposed 26,000 UN/AU force will achieve nothing.

Sudan’s government, meanwhile, is in limbo. On October 11, the Sudan People’s Liberation Army/Movement (SPLA/M), the southern-based former rebels headed by Sudan’s First Vice-President Salva Kiir, abruptly left the Sudanese government, accusing Bashir’s party of backsliding on the landmark 2005 power-sharing agreement that ended the 22–year civil war between the mostly Muslim North and the predominantly Christian South. Under the agreement, South Sudan will vote on secession in 2011. The SPLA/M’s withdrawal makes such an outcome more likely.

Before that happens, though, the North-South border must be delineated, a delicate task given that much of Sudan’s oil sits right in the middle in a disputed area called Abyei. Bashir recently rejected the official Abyei Boundary-Commission finding that placed much of Abyei’s oil in South Sudan. Abyei will itself vote on whether it wants to be part of the North or South in 2011. If it goes South and the South then secedes, the oil goes too. Complicating matters further, oil-rich areas along the proposed border stretch well into Darfur.

Yet oil is hardly the sole factor linking Darfur and the South; power politics are at play here, too. As part of the 2005 peace deal, Sudan is slated to hold national elections in 2009, two years before the South’s secession referendum. In a fair contest, Bashir and the NCP would surely lose power in Khartoum. Many northerners resent the South’s potential secession almost as much as they do the NCP’s long monopoly on power and patronage. In elections, the SPLA/M will likely win big in the South, making secession more likely. But elections will be difficult to run amid fighting in Darfur and along the North-South border, so the NCP is surely stalling peace now to forestall bigger losses later on.

But the NCP’s enemies are not standing idly by. As they did in 2003, Muslim rebels from Darfur are linking up with the largely Christian South Sudanese against the Islamist Arab generals dominant in Khartoum since 1989. Just last Tuesday, JEM militants kidnapped two foreign workers during an attack on a Chinese-run oil concession in Kordofan province—which borders Darfur and Abyei—in an effort to take the fight outside Darfur and into a zone where the NCP-led Army repeatedly clashed with the SPLA/M before the 2005 peace deal. It is significant that while peace talks were going nowhere in Sirte, JEM leaders met SPLA/M officials in Juba, South Sudan’s would-be capital, and issued a joint statement supporting the SPLA/M withdrawal from government.

NCP and SPLA/M troops are cheek-by-jowl in Abyei and other oil-laden border areas. With the NCP defiant over SPLA/M allegations that it is stalling implementation of the 2005 deal and no sign of progress on divisive issues, the bases seem loaded for a return to war across Sudan. Sadly, it may be just a question of time.

Simon Roughneen’s reports on Sudan and elsewhere been published by ISN Security Watch and in various Irish and British newspapers. He has also been to Sudan as Advocacy Officer with GOAL and will have two chapters on politics and security in Sudan published in Beyond Settlement (Associated University Press, 2007).