ERIC THAYER/Getty Images News Ron Paul is a seductive mistress. His popularity on MySpace and YouTube is now legendary. It helped him raise more than $5 million in the third quarter of this year’s fundraising cycle. Even some among the media elite — on both sides of the aisle — can’t resist his charm. Conservative blogger Andrew Sullivan gets downright ... 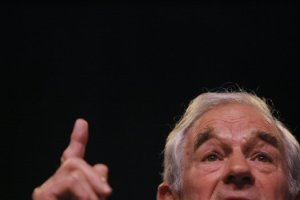 Ron Paul is a seductive mistress. His popularity on MySpace and YouTube is now legendary. It helped him raise more than $5 million in the third quarter of this year’s fundraising cycle. Even some among the media elite — on both sides of the aisle — can’t resist his charm. Conservative blogger Andrew Sullivan gets downright giddy over Paul. And liberal Hardball host Chris Matthews (who cut his teeth under big government, East Coast Democrat Tip O’Neill) has declared of the libertarian from Texas: “He’s my guy! I love Ron Paul!”

But do people understand what Paul really stands for? Like every siren song, his policies are fraught with danger. Let’s take a look:

1. Foreign Policy and the Constitution. Paul is what you might call a Constitutional originalist. He divines his governing philosophy from the Constitution and America’s Founders. But his understanding of their vision is profoundly flawed. Paul appears to believe the founders vested absolute authority for foreign-policy making in Congress, not the executive. “Policy is policy,” Paul wrote in 2006, “and it must be made by the legislature and not the executive.” But there’s almost no evidence the founders saw it in such simplistic, absolute terms. Law professor Michael Ramsey, a former clerk for Supreme Court Justice Antonin Scalia, recently noted  (pdf) this in very eloquent terms in the Harvard Journal of Law and Public Policy. Reasonable people can agree that Congress has failed its oversight responsibilities with regard to Iraq and the Bush Doctrine. But Paul’s thinking here is simply not supported by the weight of historical evidence.

2. “Noninterventionism.” This is the word Paul uses to describe his foreign policy, and he insists the term also encapsulates the vision of the Founders. While Paul claims “noninterventionism” is not isolationism, it sure sounds like it is. For instance, he even seeks to dismantle the Bretton Woods system of international cooperation born from the ashes of the Second World War (more on that below). Isolationism by any name, friends, is still isolationism. Sure, such sentiments were rampant in 18th and 19th century America and before WWII. The same sentiments are resurfacing today as a backlash against Iraq. Intelligent people can disagree about the Bush Doctrine’s place in history. But let’s not make up facts. The post-9/11 period has been filled with literature by such historians as John Lewis Gaddis and Walter Russell Mead debunking the notion that the founders were only concerned with domestic security and never saw an ideological component to America’s place in the world.

3. Iraq. Let’s assume Paul is right that foreign-policymaking powers are vested in the Congress. Why, then, does he keep promising that as president he will “immediately” pull U.S. troops out of Iraq? Presumably he intends to govern as he says the Founders intended. But there’s a deep contradiction here. If as president he will have no authority to execute foreign policy except as Congress dictates, how can he promise on the campaign trail to get American troops out of Iraq? I don’t get it.

And let’s focus for a second on the word “immediate.” This is a cheap campaign trick. People in the know agree it will take between six and 14 months to get the troops and equipment out. Paul might seek to immediately begin getting the troops out. But don’t be fooled. It’s going to be a long and costly process. Or does Paul just intend to leave  the equipment and bases behind for the Iraqis to use in the ensuing civil war?

4. “World governmental organizations.” That’s how Paul refers to the Bretton Woods institutions. He wants America out of the World Trade Organization, the North America Free Trade Agreement, and the United Nations, among others. Paul’s official Web site warns visitors: “Both the WTO and CAFTA could force Americans to get a doctor’s prescription to take herbs and vitamins. Alternative treatments could be banned.” There is a fine line between Rudy’s fear mongering over 9/11 and Ron’s fear mongering over the United Nations, friends. Next comes talk of black helicopters. The U.N. has problems, sure, but does anyone serious really believe that the world would be better off without the United Nations? And, given that there’s no indication other countries are about to close the doors on these  institutions — many of which the United States in fact founded — isn’t America better off having some influence within them? Paul says that, without clout inside the system of institutions which binds all other modern nations, America will be strong thanks to “open trade, travel, communication, and diplomacy.” Sure, and we can all sit around the camp fire and sing Kumbaya with Kim Jong Il.

5. Iran. As recently as April 2006, Paul said, “Iran does not have a nuclear weapon and there’s no evidence that she is working on one—only conjecture.” I’m for unconditional, bilateral dialogue with Iran. I believe there’s time to deal with Tehran in non-military terms. But you’d have to be a fool to believe Ahmadinejad when he says his nuclear program is for peaceful purposes. In fact, I can’t think of a single person in the foreign-policy community who thinks Iran’s nuclear intentions are pure. Earth to Ron, come in Ron.

Ron Paul’s candidacy was fun. I get as much of a kick out of seeing the antiwar left rally behind a guy who has no problem with folks carrying concealed Uzis as the next guy. But play time is over. We’re two months away from the first primaries. And Ron Paul’s 15 minutes are up.

NEW FOR SUBSCRIBERS: Want to read more on this topic or region? Click + to receive email alerts when new stories are published on U.S. Foreign Policy, Politics, North America