You may already have seen this incredible photo from a fire in Ludwigshafen, Germany, an industrial town across the Rhein from Mannheim: AFP/Getty Images The photo instantly told a heartwarming, if tragic, story: Fire-trapped Family Throws Baby to Safety. Nine people died in Sunday’s blaze, and a further 60 were injured. But incredibly, the 11-month-old ...

You may already have seen this incredible photo from a fire in Ludwigshafen, Germany, an industrial town across the Rhein from Mannheim:

You may already have seen this incredible photo from a fire in Ludwigshafen, Germany, an industrial town across the Rhein from Mannheim: 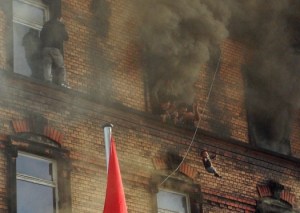 Nine people died in Sunday’s blaze, and a further 60 were injured. But incredibly, the 11-month-old baby survived without injury. In recent days, though, the story has taken a darker turn. Speculation is growing that the fire was not an accident, but racially motivated arson aimed at Turkish or Turkish-origin families living in the building. The accusations have been aired prominently in the Turkish press, and Prime Minister Tayyip Erdogan is reportedly meeting with German Chancellor Angela Merkel today about it. There is some suggestive circumstantial evidence that arson was the motive:

The police confirmed Wednesday that the apartment building had already been daubed with neo-Nazi graffiti before the fire. The word “Hass” (“hate”) was written twice on the wall next to the entrance to a Turkish cultural center on the ground floor of the building, with the last two letters written in the style of the Germanic runes of Hitler’s SS organization.

Investigators have yet to issue their findings, however. For Germany, this is an extremely delicate topic. There are an estimated 2.5 million ethnic Turks in Germany, a relatively large minority in a nationalistic country of about 82.5 million. The good news? In the most recent state elections in Hesse, voters appeared to reject a xenophobic campaign waged by the incumbent, a Merkel ally. Tensions, of course, could easy flare up as a result of this incident. Stay tuned.

NEW FOR SUBSCRIBERS: Want to read more on this topic or region? Click + to receive email alerts when new stories are published on Politics, Europe