JOE RAEDLE/AFP/Getty Images (FILE) Fox News just reported that Mitt Romney is abandoning his presidential bid today. He’s using the word “suspend,” Mark Helperin says, so that he can pay himself back. More in a bit… Here’s the AP story: If I fight on in my campaign, all the way to the convention, I would ...

Fox News just reported that Mitt Romney is abandoning his presidential bid today. He's using the word "suspend," Mark Helperin says, so that he can pay himself back. More in a bit... 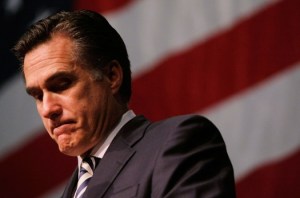 Fox News just reported that Mitt Romney is abandoning his presidential bid today. He’s using the word “suspend,” Mark Helperin says, so that he can pay himself back. More in a bit…

If I fight on in my campaign, all the way to the convention, I would forestall the launch of a national campaign and make it more likely that Senator Clinton or (Barack) Obama would win. And in this time of war, I simply cannot let my campaign, be a part of aiding a surrender to terror,” Romney planned to say in a speech to the Conservative Political Action Conference.

“This is not an easy decision for me. I hate to lose. My family, my friends and our supporters … many of you right here in this room … have given a great deal to get me where I have a shot at becoming president. If this were only about me, I would go on. But I entered this race because I love America, and because I love America, I feel I must now stand aside, for our party and for our country.” [Full speech here.]

Helperin: 10 things Romney could have done differently. I think this gets to the heart of Romney’s problem:

Could have consistently presented his own personality—disciplined, ambitious, take-charge, impersonal, passionate about his family and his religion—rather than tried to fit himself into a series of established Republican templates.

UPDATE: His supporters apparently weren’t in the loop:

The news that Mitt Romney was suspending his campaign buzzed through the Omni Shoreham this afternoon at the annual Conservative Political Action Conference, but many Romney supporters seemed to be the last to know.

His volunteers still passed out “change” buttons in the halls outside the ballroom where he was scheduled to speak; many in the audience were waving red foam “Mitt” mittens and other campaign merchandise in the air, and calling out his name.

We asked 20 experts to grade the administration’s foreign policy after two years in office.