Is FP a front for Hamas?

Abid Katib/Getty Images I see that the good folks at Little Green Footballs are outraged about Thursday’s photo essay on a Hamas-affiliate’s graduation ceremony in Gaza. The LGF author writes of FP, “They’re currently running a light-hearted slice-of-life photo essay on a Hamas terror training camp.” At issue is this bit of text: Photo Essay: ...

At issue is this bit of text: 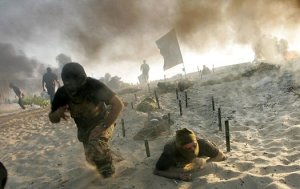 At issue is this bit of text:


Photo Essay: Are You Tough Enough for Hamas Boot Camp?

Think you have what it takes to join the Islamic resistance? Here’s how Hamas militants in Gaza have been spending their summer.

This is beyond the pale. I’m sorry but it sounds like a Hamas training brochure. Do these people at FP understand or realize what they’re doing here? This is an out and out BLATANT advertisement for Hamas recruiting.

“It makes me sick to my stomach that someone actually is trying to glorify these cowards,” says FldDoc.

Mosse wonders, “Is this postmodern drollery or something more sinister?”

Let’s all take a deep breath, people. As the person who put this thing together for ForeignPolicy.com, let me make one thing clear: Nobody here is trying to glorify Hamas, which is duly listed as a terrorist organization by the U.S. State Department and others. It’s pretty newsworthy, though, that the Hamas-affiliated Popular Resistance Committees (PRCs), also widely considered a terrorist organization (though not explicitly listed by State), are training in this way and so openly, and the captions tell a broader story of the rising tensions that threaten to destroy the fragile Gaza cease-fire. As for the photographs themselves, I think we can all agree that they make for compelling viewing.

It’s clear, however, that LGF commenters are furious that this photo essay doesn’t take a strong, anti-Hamas line. Do they really fear that somehow, FP readers will be motivated by these photographs to join the “Islamic resistance”? I’m not worried.

One final note: Analytically speaking, I’m not so sure about using the term “terror training camp” to describe what is going on at this facility. I don’t think the PRCs aren’t terrorists, mind you — of course they are — but from these photographs it doesn’t look like they are learning terrorist methods such as firing rockets at civilians or blowing up buses (and the PRCs have certainly done such things in the past) but rather learning how to fight like an irregular army. Other Palestinians are probably just as much a target as Israel. If anyone has any information to the contrary, please send it my way. But the real terrorist training happens far away from the cameras, I’d wager. This stuff is all just for show.