What Russia can do to Ukraine

SERGEI SUPINSKY/AFP/Getty Images Matt Yglesias, in his new digs at Think Progress, pooh-poohs the notion that the 2008 Georgian War will have implications for other former Soviet states, notably Ukraine. Writes Matt: The appeasement frame rests on the idea that it’s some kind of slippery slope from Russian bombers hitting Tblisi to attacks on Talinn, ...

Matt Yglesias, in his new digs at Think Progress, pooh-poohs the notion that the 2008 Georgian War will have implications for other former Soviet states, notably Ukraine. 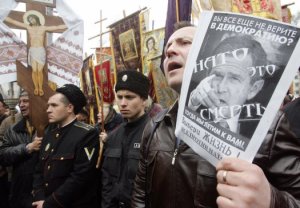 Matt Yglesias, in his new digs at Think Progress, pooh-poohs the notion that the 2008 Georgian War will have implications for other former Soviet states, notably Ukraine.

The appeasement frame rests on the idea that it’s some kind of slippery slope from Russian bombers hitting Tblisi to attacks on Talinn, Kiev, Warsaw and who knows where else. But that’s to view international politics as some kind of purely abstract, logical affair where if Russia gets away with one thing there’s nothing to stop them from marching as far west as they please. In practice, the issue is whether there’s a slipper slope of capabilities and there clearly isn’t.

This ignores the fact that there is a lot that Russia can and probably will do to make trouble for Ukraine. If there’s anything we know about Vladimir Putin, it is that he has a temper and that he doesn’t make idle threats.

What might Ukraine expect in retaliation for expressing solidarity with Georgia? Well, for one, it might find itself a wee bit short on gas this winter. Mysterious separatist groups might start to cause trouble in Crimea, where Russia’s Black Sea Fleet is based.

It’s also worth remembering that nearly a quarter of Ukraine’s population are Russian-speakers who, in large part, were never really on board with the pro-Western Orange Revolution. Russia will undoubtedly ramp up the use of “political technology” to give pro-Russian political forces a boost. I think that when people are talking about the Russian threat, this kind of low-level subversion is primarily what they mean — not tanks in the streets of Kiev.

If people don’t mean to conjure up images of tanks rolling into Kiev — or at a minimum, bombers in the sky above — when they talk about future Russian pressure on Ukraine, then they shouldn’t use inflammatory language about Munich and appeasement.