Is Kim Jong Il at death's door? The North Korean leader's failure to appear at his country's 60th birthday celebrations Tuesday has raised speculation that Dear Leader is seriously ill. 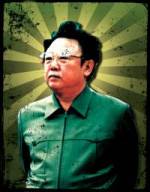 Is Kim Jong Il at death’s door? The North Korean leader’s failure to appear at his country’s 60th birthday celebrations Tuesday has raised speculation that Dear Leader is seriously ill.

Western intelligence agencies believe Kim may have suffered a stroke on Aug. 22, though a South Korean government official said Wednesday that his stroke was not life-threatening.

“It is quite certain that some French and Chinese experts have entered North Korea to treat Kim Jong Il but it remains unknown what condition he is in,” said South Korean analyst Yang Moo-Jin.

“We see such reports as not only worthless, but rather as a conspiracy plot,” a North Korean spokesman in Japan responded. Some have speculated that Kim’s disappearance is a negotiating ploy; North Korea has threatened repeatedly in recent weeks to rebuild its nuclear reactor.

The lines of succession in Pyongyang are notoriously unclear, so experts are unsure who might follow Kim if he does die or step aside.

Neither Barack Obama nor John McCain has a particularly distinguished record on Fannie Mae and Freddie Mac.

The U.S. budget deficit for 2008 will be $407 billion, the Congressional Budget Office estimates, more than twice that of 2007.

The U.S. House of Representatives voted overwhelmingly to end a program that gives Mexican truckers full access to U.S. highways.

Mexican drug gangs have launched a gruesome wave of beheadings.

The six parties that make up Thailand’s ruling coalition plan to nominate their new prime minister on Friday.

The BBC reviews the contenders to succeed Yasuo Fukuda as prime minister of Japan. For once, there’s a real race.

Iran is crying foul after former Mossad operative Rafi Eitan implied in an interview with Der Spiegel that Israel might seize Iranian President Mahmoud Ahmadinejad and deliver him to the International Criminal Court.

The government of Sudan is attacking rebel strongholds in northern Darfur.

Europe and the Caucasus

Russia has begun dismantling its checkpoints in Georgia proper. But a Georgian police officer died Wednesday when shots were fired from the direction of a Russian checkpoint, Georgian officials say.

Separatist movements within Russia are heartened by the recognition of South Ossetia and Abkhazia.

Russia is calling for an arms embargo on Georgia, yet it plans to station 7,600 troops in the breakaway regions.

Britain is reducing the number of skilled immigrants it accepts each year.

OPEC members agreed to keep production levels in line with their quotas, a reduction that would amount to roughly half a million barrels a day.

Lehman Brothers is in deep trouble.

Scientists in Switzerland have activated the long-awaited Large Hadron Collider. So far, the Earth remains intact.

U.S. Defense Secretary Robert Gates and Adm. Mike Mullen, chairman of the Joint Chiefs of Staff, will testify before the House Armed Services Committee on Afghanistan and Iraq at 10 a.m.