Study: Surge of violence led to peace in Iraq

Everyone agrees on one thing: For the last year plus, the death count in Iraq has been on the decline. Iraq is slowly calming after five years of turbulence, to say the least. Was it the troop surge that did the trick? Was it Gen. David Petraeus and his awesome counterinsurgency tactics? A creative study ...

Everyone agrees on one thing: For the last year plus, the death count in Iraq has been on the decline. Iraq is slowly calming after five years of turbulence, to say the least.

Was it the troop surge that did the trick? Was it Gen. David Petraeus and his awesome counterinsurgency tactics?

A creative study released today by the University of California, Los Angeles, says no. The researchers’ alternative hypothesis is disconcerting: Ethnic violence cleared Baghdad’s most troublesome neighborhoods of occupants before U.S. soldiers ever had the chance.

Using free satellite imagery from the Department of Defense, researchers tracked electricity use in Iraq before, during, and after the surge took place. Electricity use (as measured by visible night-light) in Baghdad fell, notably in certain outlying neighborhoods where incidents of ethnic violence were documented by The Report of the Independent Commission on the Security Forces in Iraq. 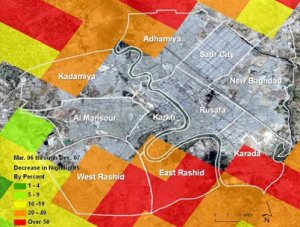 “If the surge had truly ‘worked,’ we would expect to see a steady increase in night-light output over time,” says Thomas Gillespie, one of the co-authors, in a press release. “Instead, we found that the night-light signature diminished in only certain neighborhoods, and the pattern appears to be associated with ethno-sectarian violence and neighborhood ethnic cleansing.”

The authors note that in the same time period, electricity use increased in cities outside of Baghdad where the surge (as well as the same intensities of ethnic violence) was largely absent. The authors believe it is unlikely that a decimated power grid alone generated their results, since personal generator use is popular in Iraq’s capital city.

Despite the eerily apparent correlation between maps of ethnic violence and maps of electricity use, there are several questions to clarify before the survey is crowned as truth. Feel free to suggest others in comments.

First, it would be interesting to overlay yet another map depicting the intensity of the surge by neighborhood. If the authors’ theory is correct, one would expect the areas with electricity decrease to be easier to patrol since they had already been violently cleansed of their troubles.

Likewise, is it possible that the surge itself led to the decrease in electricity use? If the neighborhoods in question were also hot spots for the surge, soldiers could have damaged infrastructure accidentally during patrols, residents could have fled, or loss of life is conceivable in military confrontation. Whatever the explanation, this would yield an equally disturbing interpretation: the surge actually diminished residents’ quality of life and access to power rather than causing an improvement.

Finally, there is no mention of the reported security improvements in areas such as Anbar Province, where casualties have also dropped off significantly. More satellite data — if and when it is available — might shed light on what happened outside the capital.

Without more on the ground accounts, it is difficult to say just how earth-shattering the findings released today are or aren’t. Certainly, there has been a staggering amount of ethnic violence, the extent of which is still trickling out with the more than two million refugees now living abroad.

For those who fled, the calm — if it is real — has truly been a separate peace.