Top Story Alex Wong/Getty Images The Group of Seven is happy, but it’s hard to find much enthusiasm elsewhere about the Bush administration’s answer to the financial crisis, a $700 billion proposal to take illiquid assets off the balance sheets of credit-starved institutions. “The plan is being marketed under false pretenses,” complains Washington Post columnist ...

The Group of Seven is happy, but it's hard to find much enthusiasm elsewhere about the Bush administration's answer to the financial crisis, a $700 billion proposal to take illiquid assets off the balance sheets of credit-starved institutions. 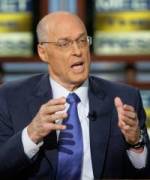 The Group of Seven is happy, but it’s hard to find much enthusiasm elsewhere about the Bush administration’s answer to the financial crisis, a $700 billion proposal to take illiquid assets off the balance sheets of credit-starved institutions.

“We are now going to get other sectors asking to get bailed out, such as the automotive industry,” former IMF chief economist Kenneth Rogoff warns. “Who else is Washington going to prop up?”

For NYU economist Nouriel Roubini, who supports a rescue, the problem is the authority given to Treasury Secretary Henry Paulson. “He’s asking for a huge amount of power,” Roubini told Bloomberg News. “He’s saying, ‘Trust me, I’m going to do it right if you give me absolute control.’ This is not a monarchy.”

Congress is under pressure to pass legislation this week before the fall recess. Democrats would like to see provisions that limit CEO pay, provide greater congressional oversight, and assist homeowners directly. President George W. Bush prefers a “clean” bill that focuses on illiquid assets.

Paulson hit the weekend talk shows to defend the rescue proposal, which critics have dubbed “cash for trash.” “This is not something that we wanted to do,” a sober Paulson insisted on Meet the Press Sunday. The secretary defended one particularly controversial part of the plan, which would allow non-U.S. banks to be able to sell their “toxic waste” to the government as well.

Investors appear to be treating the bailout plan with caution, but credit markets, not stocks, are the ones to watch in the days ahead. Meanwhile, investment banks Goldman Sachs and Morgan Stanley, seeking shelter from the winds that battered Lehman Brothers and Bear Steans, moved to become holding companies.

The two presidential candidates offered caveated support for the bailout plan, both saying its cost would not make them trim their agendas. Al Hunt weighs in.

Brazilian President Luiz Inacio Lula da Silva mocked Wall Street in a speech, saying, “Important banks… that spent their lives giving advice about Brazil and what we should or shouldn’t do are now broke.”

Bolivian President Evo Morales named an admiral to replace the governor of unruly Pando province, whom he arrested last week.

Pakistan’s president is under pressure to respond to Saturday’s massive truck bombing at the Islamabad Marriott, which killed at least 53 people.

Ehud Olmert resigned Sunday and Israeli President Shimon Peres is meeting with party leaders in the Knesset. Kadima’s Tzipi Livni, the likely next prime minister, is in talks with the Labor Party and others to form a government.

The U.S. military says Iranian-trained assassins are returning to Iraq.

The African National Congress will choose an interim president now that Thabo Mbeki has stepped down in South Africa.

Italian air carrier Alitalia is at risk of losing its license to fly.

British PM Gordon Brown to the BBC: “I want to do better.” He speaks Tuesday at the Labor Party conference.

The U.N. General Assembly kicks off this week.