Two things that need to be said about this. The Afghan war isn’t either. That is: It isn’t a good war It isn’t an Afghan war What do I mean by that? First, I find the “good war” term offensive. I find it hard to use that word to describe anything that maims and kills ... 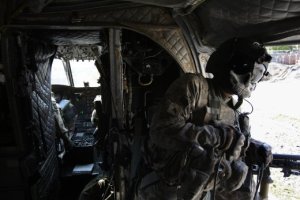 Two things that need to be said about this. The Afghan war isn’t either. That is:

What do I mean by that? First, I find the “good war” term offensive. I find it hard to use that word to describe anything that maims and kills innocent men, women and children. All wars have an element of evil in them. That said, this one was better than most. I thought that invading Afghanistan in late 2001 was the right thing to do, and I still do.

But I wonder what the hell we’ve been doing since then. The conflict in Afghanistan has kind of unfairly had the reputation of “the little war that could,” in comparison to the fiasco in Iraq, seen as doing more with less. Yet the record doesn’t support that. An Army War College review concluded that Gen. Tommy R. Franks’ command of the initial invasion was sloppy, as was his handling of the battle of Tora Bora, from which Osama bin Laden apparently escaped.

The next big battle of the war, the “Anaconda” fight in the spring of 2002, was a haywire operation, with Special Operators deeply unhappy with their handling by conventional commanders, and the conventional guys wondering why Franks wouldn’t allow them to bring artillery into the theater. (He and Rumsfeld wanted a light footprint, apparently confusing combat with ballet.) Then, in the fall of 2002, many Special Operations units were pulled out of the country in order to prepare for the invasion of Iraq, a move to which historians likely will point as a dangerous turning point in the Afghan war. Finally, the allied command structure in Afghanistan has been screwy from the start, provoking real angst with the British military, among others.

Second, this isn’t really about Afghanistan. It is about Pakistan-and might in the coming weeks morph into being about the entire South Asian subcontinent. The United States could “lose” Afghanistan and not suffer greatly. But “losing” Pakistan is a far more worrisome proposition, because Pakistan has both nuclear weapons and Islamic extremists. There aren’t a lot of things in the world that worry me more than that combination. And our war in Pakistan has been heating up considerably in recent months, with our Predator drone aircraft regularly whacking their leaders and their guys routinely torching our trucks and threatening our major supply line–each side playing to its own strength. The Khyber Pass road actually was reported closed last week.

Nor will we make much progress in Afghanistan, the secondary problem, until we make some progress in Pakistan, the primary and more difficult problem. This means we should be careful of any “solutions” offered to the war that don’t deal with Pakistan. An Afghan-only solution is no solution at all.

So, should we call this the Afghan-Pakistani war? Or the Subcontinental War? Either would be more accurate, and that is always helpful in thinking about how to wage war.

What should we do? I dunno, but it is going to be interesting to watch General Petraeus, the new chief of Central Command, in the coming months. I suspect he will try to follow the spirit but not the letter of his approach in Iraq over the last couple of years. That is, rather than force enemies together, he will try to disaggregate them. He will do the sensible thing and follow Andrew Krepinevich’s law of the conservation of enemies: Don’t make any more than you need to have at any given time. In Afghanistan (where I lived from 1969 to 1971, and then visited in 1977, 2002, and 2004), the most likely approach would be to favor tribes over Islamic extremists, even while peeling off the less extreme extremists.

Of course, that great military thinker Rudyard Kipling laid out this strategy pretty precisely in his ironically titled short story “The Head of the District.” And yes, decapitation of one’s enemies is nothing new on Afghanistan’s plains, where the women would come out to cut up what remains.

Thomas E. Ricks covered the U.S. military from 1991 to 2008 for the Wall Street Journal and then the Washington Post. He can be reached at ricksblogcomment@gmail.com. Twitter: @tomricks1
Tag: Afghanistan