Why Hezbollah is laying low

Hezbollah Secretary General Hassan Nasrallah has castigated Israel and U.S.-allied Arab countries as Israeli troops press further into Gaza, but he has also refused to unleash Hezbollah’s rockets, which could wreak havoc in northern Israel. So why, as Tom Ricks wonders, hasn’t Nasrallah joined the battle? Because he isn’t suicidal. IDF generals have made clear ... 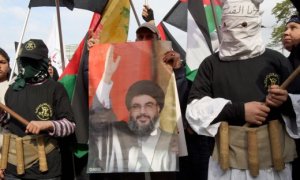 Hezbollah Secretary General Hassan Nasrallah has castigated and U.S.-allied Arab countries as Israeli troops press further into , but he has also refused to unleash Hezbollah’s rockets, which could wreak havoc in northern . So why, as Tom Ricks wonders, hasn’t Nasrallah joined the battle?

Because he isn’t suicidal. IDF generals have made clear that another war with Hezbollah would likely be far more destructive than the 2006 confrontation and would likely include a ground invasion. Hezbollah is adept at fighting an insurgency in South Lebanon because they have always been able to draw on the support of the Lebanese Shia and capitalize on a weak or complicit central government in . If Hezbollah initiated a war with , there is no guarantee that it would benefit from either of these factors.

“If they start something, they know the biggest loser will be their constituency, the Shia community of ,” former UN Interim Force in Lebanon spokesman Timur Goksel told me. Many of the predominantly Shia villages in have not yet been fully reconstructed from the Israeli assault in 2006. The Shia support Hezbollah because it represents their sectarian interests, provides social services, and defends them from . Hezbollah does not want to test whether their constituency is ready to once again pay the price for furthering its international agenda.

In the larger Lebanese political scene, this is an awkward time for military adventurism. The pro-Western forces in the government have insisted on a “national dialogue” to determine a national defense strategy, which could constrain Hezbollah’s use of its militia. Hezbollah and its allies have managed to stall this discussion, but if Hezbollah were to unilaterally launch a war against they would be subject to renewed pressure from their domestic opponents.

is also gearing up for parliamentary elections on June 7, and Hezbollah hopes to win enough seats to be the primary player in a government of its own. The near-unanimous condemnation of ’s actions in plays into Hezbollah’s hard-line stance towards , and puts ’s allies in in a difficult position. For Hezbollah, using the issue to sweep into power is a far better option than launching a war it cannot hope to win.

Document of the Week: Pompeo Seeks Deal to Remove Sudan From Terrorist List Before U.S. Election