The purple tunnel of doom

A reported two million people watched Barack Obama’s inauguration today.  I, unfortunately, wasn’t one of them. If you don’t care why, and just want foreign policy blogging, skip the rest of this post and come back tomorrow. See, I went to the show with a few friends who received excellent Purple tickets as a reward ...

A reported two million people watched Barack Obama’s inauguration today.  I, unfortunately, wasn’t one of them. If you don’t care why, and just want foreign policy blogging, skip the rest of this post and come back tomorrow.

See, I went to the show with a few friends who received excellent Purple tickets as a reward for untold hours volunteering as foreign policy advisers for the Obama campaign.  We got down to the security checkpoint for the Purple section bright and early (I left home at 4 AM), and were guided into a long tunnel which had been closed to traffic.  We waited in line for nearly four hours, in a claustrophobic tunnel with no porta-potties, no food or drink, and not a single official or volunteer in sight.  Finally, we got within sight of the Purple Gate — only to find that it had been closed.  Thousands of people in front of us hadn’t gotten in (not that anyone bothered to tell the people languishing in the tunnel that the gate had been closed, mind you). Thousands of purple ticket holders were behind us.  It’s remarkable that there wasn’t a riot.  I rode the metro home with a lot of people who had been turned away, including an elderly African-American woman muttering over and over to herself that it had been one of the worst experiences of her life.

Searching for a foreign policy angle so that it isn’t just my own bitter rant (and can be justified on FP.com)…

Maybe it’s a metaphor for how foreign policy advisers to the Obama campaign feel — thrown out into the cold, shunted into a dismal and dank tunnel, abandoned without any communication, and ultimately locked out of the show.

Or maybe the Israelis could study the experience to learn how to stop the Gaza tunnels — give every Hamas member a Purple ticket.

Either way, I just hope that Obama runs his foreign policy more effectively than the inaugural committee ran the ticketed sections today.   What a dismal way to begin the new era.  Bleah.  I hope it was a great speech.

UPDATE:  okay, enough whining (though I see I’m not the only one)… looks like it was indeed a great speech. I liked this part:

To the Muslim world, we seek a new way forward, based on mutual interest and mutual respect.  To those leaders around the globe who seek to sow conflict, or blame their society’s ills on the West – know that your people will judge you on what you can build, not what you destroy.  To those who cling to power through corruption and deceit and the silencing of dissent, know that you are on the wrong side of history; but that we will extend a hand if you are willing to unclench your fist.

UPDATE 2:  join the Facebook page “Survivors of the Purple Tunnel of Doom” here.. I didn’t start it, I swear! Maybe if it gets big enough we can get someone to explain how they managed to give out thousands more tickets than they had room for, why they had absolutely no crowd control or support, and why they didn’t have a backup plan.  Not the biggest issue in the world, I know, but first had to take care of the world I know…

THE UPDATE THAT WON’T END (sort of like the tunnel): 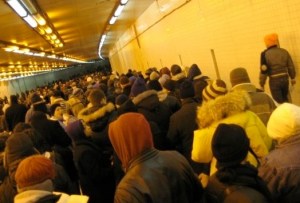 Inside the tunnel: note the absence of any officials or order, and imagine a stampede.

The Facebook group is already over 100 150 strong, with comments pointing out the unbelievable security risks posed by putting thousands of unscreened people into a tunnel… with no security, no paramedics, no officials with walkie-talkies. With Gaza in ruins it seems absurd to continue complaining, but still… someone’s got some explaining to do. People traveled from far away, many at great expense, because they thought they had guaranteed tickets. And there were an awful lot of Obama campaign staffers and volunteers in that section. The police chief lied bald-faced to the Washington Post (“There’s nobody that didn’t get to see the inauguration today who had a ticket”) and had to reverse himself. They and we are all incredibly lucky there wasn’t a stampede.

REALLY LAST ONE:  over 1650 members of the Facebook group now, and some media attention… but no real satisfaction (though this apology is a start). For the record, the Obama foreign policy adviser analogy was just an analogy, not for serious!