Good riddance to the gag rule

Depending on where you stand, President Barack Obama’s Friday decision to lift the Mexico City Policy, better known as the global gag rule, was either wonderful or appalling. For the last seven years, the gag rule stipulated that charities promoting and supporting abortion services could not recieve funding from the U.S. Government. Now, they can. ... 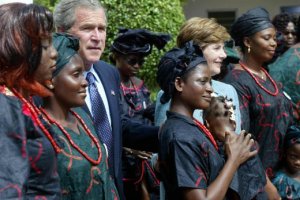 Depending on where you stand, President Barack Obama’s Friday decision to lift the Mexico City Policy, better known as the global gag rule, was either wonderful or appalling. For the last seven years, the gag rule stipulated that charities promoting and supporting abortion services could not recieve funding from the U.S. Government. Now, they can. I say: it’s about time.

My position is not drawn from either side of the abortion debate. It’s drawn from what I saw as a reporter and as a person living in Nigeria. HIV/AIDS is the open secret there — a growing problem with a whispered name.

To put it politely, the gag rule created a rift — at times gaping — between U.S. government-funded projects and those of private NGOs trying to prevent HIV infection. The U.S. government brought the buck — President Bush’s PEPFAR program boasted $39 billion for HIV/AIDS work — but it also brought rules about how to get the work done. The foundations brought less money and a sometimes different approach. Both sides fought to win the support of the local government for their strategies. From what I saw, that debate could get ugly. Friends working in the field were frustrated and saddened by the result: inertia and politics, instead of posters and condoms.

There was one particular problem that brought it home for me. In 2006, a Nigerian lawmaker announced that 55,000 women die in the country each year from unsafe illegal abortions. The evidence was everywhere — from women that my colleagues and I met to Nigerian films on exactly that topic.

What was the best way to get that statistic down? Some will say abstinence. But sex is not always a choice. It’s in those situations where women seek — or are forced by their partners to seek — unsafe abortions. Some counseling and a sterile doctor’s office would go a long way.

That’s just one example. The real “gag” was that you didn’t hear a lot of stories about birth control or HIV prevention in Nigeria. So my few are only the beginning. Maybe now we’ll start to hear a few more.