Obama to Arabs: “what you’ll see is someone who is listening”

It’s impossible to exaggerate the symbolic importance of Barack Obama choosing an Arabic satellite television station for his first formal interview as President — and of taking that opportunity to talk frankly about a new relationship with the Muslim world based on mutual respect and emphasizing listening rather than dictating. His interview promises a genuinely ...

It's impossible to exaggerate the symbolic importance of Barack Obama choosing an Arabic satellite television station for his first formal interview as President -- and of taking that opportunity to talk frankly about a new relationship with the Muslim world based on mutual respect and emphasizing listening rather than dictating. His interview promises a genuinely fresh start in the way the United States interacts with the Arab world and a new dedication to public diplomacy.

It’s impossible to exaggerate the symbolic importance of Barack Obama choosing an Arabic satellite television station for his first formal interview as President — and of taking that opportunity to talk frankly about a new relationship with the Muslim world based on mutual respect and emphasizing listening rather than dictating. His interview promises a genuinely fresh start in the way the United States interacts with the Arab world and a new dedication to public diplomacy. 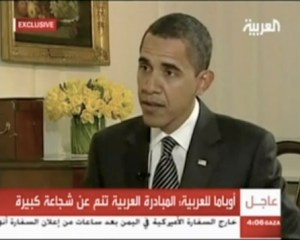 In his conversation with the estimable Hisham Milhem (a good choice for an interlocutor), Obama reached out directly to the Arab public via the Saudi TV station al-Arabiya (which shrewdly posted the transcript immediately).  It signals the importance of the Middle East to the new President, his commitment to engaging on Arab-Israeli peace, his genuinely fresh thinking and new start with the Muslim world, and his recognition of the importance of genuine public diplomacy.

I admit that I’m a little biased here. How can I not be thrilled that Obama has adopted the policy advice I’ve been offering since the publication of “Taking Arabs Seriously” in Foreign Affairs back in 2003? And in his first interview anywhere, less than a week into job, no less.  I have to admit it feels a bit odd to see an administration doing things right after all these years. But that said, credit should go where credit is due. I do think that this is an extremely significant gambit which signals his commitment to real public diplomacy, his engagement with Middle East issues (repudiating all the pundits expecting him to neglect foreign policy), and his ability to speak in a genuinely new way to the Muslim world.

His remarks hit the sweet spot again and again.  He repeatedly emphasized his intention of moving past the iron walls of the ‘war on terror’ and ‘clash of civilizations’ which so dominated the Bush era.   “My job is to communicate to the Muslim world that the United States is not your enemy,” Obama said, emphasizing as in his inaugural address that he is “ready to initiate a new partnership [with the Muslim world] based on mutual respect and mutual interest.” And where so much of the Bush administration’s ‘public diplomacy’ was about manipulating and lecturing, Obama begins — as he should — with listening: “what I told [Mitchell] is start by listening, because all too often the United States starts by dictating..so let’s listen.”

He clearly understands that this won’t be easy, that there are real conflicts and obstacles and enemies. He obviously recognizes that the Gaza crisis and eight years of the Bush administration have left a heavy toll on America’s reputation and credibility. He stressed the importance of engaging on Israeli-Arab issues right away, the need for new ideas and approaches, and the interrelationships among the region’s issues that I’ve always seen as the key to his Middle East policy (“I do think that it is impossible for us to think only in terms of the Palestinian-Israeli conflict and not think in terms of what’s happening with Syria or Iran or Lebanon or Afghanistan and Pakistan. These things are interrelated.”)

And above all, he understands that words are only the beginning, and that ultimately deeds and policy will determine Arab views of the United States. Public diplomacy is not about marketing a lousy policy — it’s about engaging honestly, publicly, and directly with foreign publics about those policies, explaining and listening and adjusting where appropriate.  Obama gets it:

“But ultimately, people are going to judge me not by my words but by my actions and my administration’s actions. And I think that what you will see over the next several years is that I’m not going to agree with everything that some Muslim leader may say, or what’s on a television station in the Arab world — but I think that what you’ll see is somebody who is listening, who is respectful, and who is trying to promote the interests not just of the United States, but also ordinary people who right now are suffering from poverty and a lack of opportunity. I want to make sure that I’m speaking to them, as well.”

I couldn’t have written this script better myself.

Arabs are both impressed and skeptical.  As one prominent Jordanian blogger commented,

I will update with additional Arab reaction as it begins to pour in (it’s a day too soon for editorials, for the most part there are only a few straightforward news reports like this one in Jordan’s al-Ghad).

Three other important points which have thus far been missed in the general commentary:

More to come, no doubt. This is only a start and won’t solve anything on it’s own, but this is simply an outstanding way to start transforming the American engagement with the Arab world. Well done.

UPDATE:  in light of its relevance to Obama’s outreach to Arab television, Foreign Affairs has made the full text of my 2003 article available online for free.  Thanks!