Netanyahu on Al-Jazeera (screen capture) I spent a good part of yesterday afternoon watching al-Jazeera’s coverage of the Israeli elections.  I’ve also been reading editorial commentary and news coverage from across the Arab world. I’d like to be able to say that Arabs are on the edge of their seats awaiting the outcome.  ... 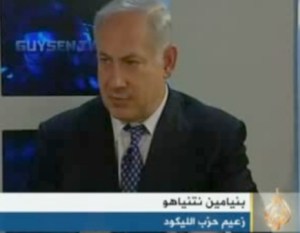 I spent a good part of yesterday afternoon watching al-Jazeera’s coverage of the Israeli elections.  I’ve also been reading editorial commentary and news coverage from across the Arab world. I’d like to be able to say that Arabs are on the edge of their seats awaiting the outcome.  But that’s not what I’m seeing. For the most part, the elections are seen as a choice between bad (Livni) and worse (Netanyahu) with Lieberman the “real” emerging face of Israel.  This isn’t like 1996, when the choice between Peres and Netanyahu seemed stark and urgent.   Today, they survey the wreckage of Gaza and see little reason for hope regardless of the outcome.   Whoever wins the election, argues the journalist Mustafa Zayn in al-Hayat, the true winner will be Ze’ev Jabotinski and his doctrine of the “Iron Wall.”

The skepticism bridges today’s great divide in Arab politics. There’s little difference between the coverage in al-Quds al-Arabi (the most populist / “rejection camp” of the major Arab papers) and al-Sharq al-Awsat (the most conservative / “moderate camp” Saudi paper). The Saudi station Al-Arabiya leads with the rise of Israeli extremists (mutatarufin, the same word used to described al-Qaeda extremists). Al-Sharq al-Awsat describes the election as the choice between “the right and the extreme right.” Neither Barak nor Livni is seen as offering a particularly better choice after Gaza.  The veteran journalist Abd al-Wahhab Badrakhan is “waiting for Lieberman,” marveling that Netanyahu finally succeeded in finding someone worse than himself — and arguing, as many do, that Lieberman would be the best winner since he would show Israel’s “true face.”

Much of contemporary International Relations theory argues that the superiority of democracy lies in its transparency, as a free press and political competition and elections allow other countries to more accurately assess its intentions.  In this case, the transparency of Israeli democracy may be working just as IR theorists expect… but the message being sent is the opposite of reassuring.  Whoever wins will have to take significant steps — “costly signals” in the IR lingo — to change these Arab expectations and fears. We’ll see.

Will China’s New Missile Lead to Escalation or Stability?

Jordan Is Not Palestine

Will China’s New Missile Lead to Escalation or Stability?

Jordan Is Not Palestine