Did the U.S. engineer an African military operation?

A couple of weeks ago, I wrote enthusiastically about the tri-government military operation that Uganda, Congo, and Southern Sudan were undertaking to root out the Lord’s Resistance Army (LRA). Unfortunately, since then, things haven’t been going well. The LRA managed to survive the initial military onslaught, and went on to massacre as many as 900 ... 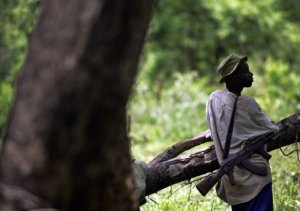 A couple of weeks ago, I wrote enthusiastically about the tri-government military operation that Uganda, Congo, and Southern Sudan were undertaking to root out the Lord’s Resistance Army (LRA). Unfortunately, since then, things haven’t been going well. The LRA managed to survive the initial military onslaught, and went on to massacre as many as 900 civilians since the military offensive began in mid-December. Joseph Kony, the group’s notorious leader, is still alive and well. (While the LRA’s deputy commander is set to surrender soon, it was Kony’s death or capture that was the main point of the endeavor.)

Yet, just when this military venture was about to fizzle out with its primary objective still not met, an interesting piece of news, courtesy of the New York Times, has now thrown the operation back into the spotlight. On Feb. 7, the Times reported that the United States, through the Pentagon’s newly minted Africa Command (or Africom), was heavily involved in the planning of the operation — supplying intelligence, supplies, and more than a million dollars in fuel aid. According to the Times:

The Ugandan government asked the American Embassy in Kampala, Uganda’s capital, for help, and the request was sent up the chain of command in November to President Bush, who personally authorized it, a former senior Bush administration official said.”

Given the number of civilian massacres that have occurred since the start of the operation — massacres that happened because no one adequately secured the villages in the area — this could potentially be embarrassing for Africom and the Pentagon.

I asked Vince Crawley, chief of public information at Africom, to comment on the claims made by the New York Times. He responded by emphasizing that the United States was involved only in an advisory capacity and that “this wasn’t a U.S. plan that Uganda carried out. It was a Ugandan plan that would have taken place regardless of U.S. assistance.” With regard to the securing of villages in the area, Crawley said,

There was dialogue on how to protect the areas. There was discussion. Again, it’s not a U.S. operation. … Fundamentally, it’s not appropriate for us to comment on the strategies and tactics of other nations. That’s not what partners do.”

Even with U.S. help, the LRA won’t be easy to stamp out. Check out our new list of five other rebel groups around the world that have demonstrated remarkable staying power.