Arab reports suggest that Egyptian mediation is close to producing a Hamas-Fatah reconciliation (with a unity government to be chosen within 60 days) and a truce with Israel. Meanwhile, a high-level Saudi envoy (King Abdullah’s head of intelligence Prince Muqrin) recently appeared in Damascus — followed by Arab League head Amr Moussa — while Egypt’s ...

Arab reports suggest that Egyptian mediation is close to producing a Hamas-Fatah reconciliation (with a unity government to be chosen within 60 days) and a truce with Israel. Meanwhile, a high-level Saudi envoy (King Abdullah’s head of intelligence Prince Muqrin) recently appeared in Damascus — followed by Arab League head Amr Moussa — while Egypt’s Foreign Minister and intelligence chief showed up in Riyadh for consultations. The signs are adding up that the major Arab actors are trying seriously to overcome the intense divisions of the last few months and unify their ranks. 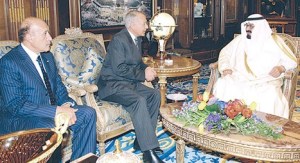 While it’s hard tell at this point how serious these efforts are, or what they will produce — the divides were deep, and the wounds remain fresh — this suggests that the “couch diplomacy” in Kuwait last month may have more legs than most observers expected at the time. Al-Quds al-Arabi (a leading voice of the “rejection/resistance camp”) dates the turnaround to the Kuwait meeting, where the Saudi King spoke harshly about Israel and called for the unification of Arab ranks in response. Most people (including, reportedly, the Syrians) thought that this was just for show and wouldn’t matter… but developments since then may suggest otherwise.

Why? With divisions intensifying, Arab leaders may have recognized the dangers of a complete collapse of the existing order. There has been a lot of talk over the last few weeks in the Arab media about the destructiveness and pointlessness of the media wars and political divisions, the failures of the Arab order over Gaza, and the need to regroup. While good sense does not as a rule prevail in these situations, this time perhaps it did. Here are a few suggestions as to why:

I’m sure that people will disagree over the relative significance of these five factors. One point to make here, though. There’s been a raging debate in the Arab press over which should come first — Palestinian reconciliation or Arab reconciliation. This was always a false choice, though. Hamas and Fatah couldn’t hope to reach agreement if their regional patrons were urging them towards conflict, while the Arab states could hardly close ranks if Hamas and Fatah remained at loggerheads. The simultaneous outreach to Syria and seeming moves towards a Hamas-Fatah deal (and truce with Israel) demonstrate the inter-connected nature of these tracks. That should have lessons for the American approach.

The moves towards Arab reconciliation is a positive sign, which the Obama administration should encourage and build upon. The sharp polarization between “moderate” and “rejection” camps is a baleful legacy of the Bush foreign policy and of the Gaza war. It may have been unrealistic to have expected it to fade overnight after years of shaping Arab foreign policy discourse and alliances. But it’s high time to jettison that approach, and to attempt to bridge Arab differences rather than exacerbate them… whether that’s led by the U.S. or by the Arab regimes themselves without an American veto.