All aboard the Arab reconciliation train 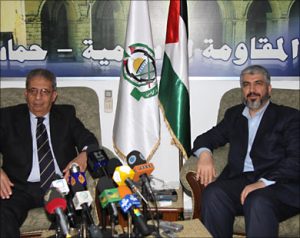 Where might this be heading? There are at least four major destinations that the various players are mooting about in public, to which the U.S. may soon need to respond:

There was a lot of skepticism about Obama’s Middle East policy in its first few weeks, with many people on both sides of the partisan divide equating it with Bush. But this sudden motion on the Arab side suggests that something else is going on. It now suddenly seems possible to envision an end to months, even years, of Arab and Palestinian political deadlock and a new regional role for Syria. (And that’s not even getting into Iraq and Iran.) Whether this is being led by Obama’s team or is being led by Arab actors trying to anticipate Obama’s policies, the effects are the same — or at least they will be if Obama can respond constructively, creatively, and effectively. Let’s hope that they swallow hard in the face of tough choices and make the right calls. None of this will be easy, any and all of it could easily fall apart in an instant, and the disasters of the last eight years won’t be overcome in a fortnight. But at least things are in motion in the right direction for a change.