“It is always a pleasure to cross a border without being sent back on the first plane,” quipped Geert Wilders at the start of his talk at the National Press Club today. The Dutch MP should know. He was recently denied entry into Britain on the grounds that we would “threaten community harmony and therefore ... 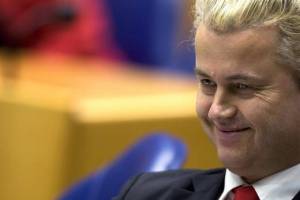 “It is always a pleasure to cross a border without being sent back on the first plane,” quipped Geert Wilders at the start of his talk at the National Press Club today. The Dutch MP should know. He was recently denied entry into Britain on the grounds that we would “threaten community harmony and therefore public safety.”

What’s so dangerous about this guy? Wilders is a leading campaigner against the “Islamization” of Europe. He has called for a moratorium on Islamic immigration into the Netherlands and pushed to classify the Koran — which he has compared to Mein Kampf — as hate speech. Thanks to his film Fitna, a 15-minute documentary that intersperses verses from the Koran with graphic footage of Islamic terrorism, he has received death threats and is under prosecution for hate speech in his own country.

Wilders got a relatively warm welcome in in the U.S., where his trip is being sponsored Frank Gaffney’s Center for Security Policy. He was invited by U.S. Senator Jon Kyl to show Fitna on Capitol Hill, and met with a number of VIPs including former U.N. ambassador John Bolton.

At the talk I attended today, Wilders was pulling no punches against Islam or its “cultural relativist” defenders, calling the religion “the communism of today” in terms of its threat to the West.

Our Western culture based on Christianity, Judaism and humanism is in every aspect better than the Islamic culture. Like the brave apostate Wafa Sultan said: it’s a comparison between a culture of reason and a culture of barbarism.”

The crowd, mostly affiliated with right-wing think tanks and organizations, treated Wilders like a rock star, even verbally attacking a few Dutch journalists who dared to ask him some hostile questions about the money he was raising for his defense in the United States.

While it can’t be easy for him personally, Wilders’ prosecution in the Netherlands and banishment from the U.K. has done wonders for his cause. As long as his legal troubles continue, Wilders can quite reasonably claim to be the victim of a society in which political correctness has gone too far and authorities are terrified of offending Muslim sensibilities.

Take away the persecution and Wilders’ argument is pretty thin gruel. The Koran verses cited in Fitna aren’t much worse than some passages of the Bible. Unlike communism and fascism, his two favorite historical comparisons for Islam, there aren’t a huge number of non-Islamic citizens in Western countries rushing to join the jihad.

His call to ban all immigration from Islamic countries belies his claims that he is not a racist and has no quarrel with Muslims who successfully assimilate. It’s a bit strange to see Americans responding so positively to Wilders’ message since this country would seem to be proof that under the right conditions, Muslims can assimilate just fine.

Europeans are actually avoiding this debate by denying him access to the public space. By, as he says “accepting the free spech standards of Saudi Arabia,” the Dutch and British are allowing Wilders to take on the role of free speech martyr and defender of enlightenment values. He seems to have the European left right where he wants them.

In the end, democracy and the Enlightenment are strong enough that they should be able to survive the threat from Islamic radicalism without banning any book or keeping anyone out. That being said, I would hope they’re more than strong enough to withstand Geert Wilders. Those who would try to legally silence him show curiously little faith in the values they’re defending.

A World in Counterfeit

How India Came Around to Talking to the Taliban