Who’s getting the AIG bailout funds?

Last night, NBC late-night comedian Jay Leno — hosting U.S. President Barack Obama this week — riffed extensively on the international implications of the increasingly catastrophic AIG bailout during his monologue: [The AIG executives] bankrupt the company, took $170 billion of our dollars and they’re giving out bonuses. You know the main thing ... 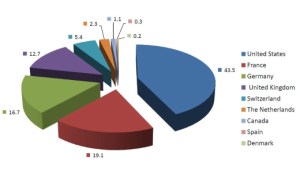 [The AIG executives] bankrupt the company, took $170 billion of our dollars and they’re giving out bonuses. You know the main thing they want to reward their people for? Convincing the Treasury Department to give $170 billion dollars to a failing company, so they can give out bonuses for a job well done. You know what “AIG” stands for — anybody know? Adventures in Greed.

They don’t have to account for any of us. Now it turns out they gave $35 billion — not million, $35 billion — of our money to bail out European banks. See, this is how a global economy works. Our hard-earned tax dollars are used to bail out German banks for making bad investments in American companies that shut down because the Japanese owners moved the whole thing to India, China, and Mexico. Boy, you thought St. Patrick drove the snakes out of Ireland? Let’s send him down to Wall Street!

Turns out, Leno’s right. This week, AIG released a document listing the “financial counterparties” who received $101 billion directly from the U.S. government’s “emergency loan.” AIG used more than of half the Treasury funds to pay down money owed for things like credit default swaps — most of which went to foreign companies’ coffers. Using data BusinessWeek broke down, we made the above chart.

Funny how the comedians are besting the finance experts now, huh?

NEW FOR SUBSCRIBERS: Want to read more on this topic or region? Click + to receive email alerts when new stories are published on Economics, North America