Who doesn’t like the affable, smiley U.S. vice president? Well, maybe lots of people. But you can’t deny that most of the time when Joe Biden makes a gaffe there’s a harmless, Homer Simpson quality to it. So he mixes up military terms, forgets who was president during the 1929 crash, and sayss Hillary Clinton ... 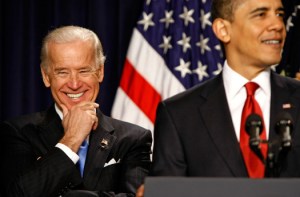 Who doesn’t like the affable, smiley U.S. vice president? Well, maybe lots of people. But you can’t deny that most of the time when Joe Biden makes a gaffe there’s a harmless, Homer Simpson quality to it. So he mixes up military terms, forgets who was president during the 1929 crash, and sayss Hillary Clinton is more qualified than him to run as VP. He also says things like “Oh, God love ya.” I mean, I’d still go duck hunting with him.

But this latest foot-in-the-mouth, did-he-really-say-that-out-loud comment he made yesterday on NBC’s Today Show was worse than a gaffe. It was a serious misstep in leadership. The hysteria and fear gripping the American public is no laughing matter, and those in a position of influence must chose their words — not to mention their tone, and their demeanor — very carefully.

In his 100-day speech, President Obama used analogies with horses and barns, reassuring folks there was no need to be alarmed. This was good. Joe Biden telling folks that he doesn’t want his loved ones in confined spaces like planes, trains, and classrooms, was the opposite of good. It was bad.

Swine flu obviously takes the cake, but to mark Biden’s 102nd day as vice president, here are his four other biggest gaffes.

In 2007 Biden called Barack Obama the first “mainstream African-American who is articulate and bright and clean and a nice-looking guy,” adding, “I mean, that’s a storybook, man.”

There’s no taking this one back, and a host of people jumped all over him, but Biden issued an apology, and went on to become Obama’s No. 2. No real harm, no foul.


Definitely closer to offensive with this gaffe. While discussing the great support he had among the Indian-American community while on the campaign trail in 2006 Biden made the following comment:

I’ve had a great relationship. In Delaware, the largest growth in population is Indian-Americans moving from India. You cannot go to a 7-Eleven or a Dunkin’ Donuts unless you have a slight Indian accent. I’m not joking.”

Perhaps his enthusiasm got the better of him. A spokesman for the then-senator clarified with this statement:

The point Senator Biden was making is that there has been a vibrant Indian-American community in Delaware for decades. It has primarily been made up of engineers, scientists and physicians, but more recently, middle-class families are moving into Delaware and purchasing family-run small businesses…”

Oh, so that’s what he meant…

At a Seattle fundraiser in October 2008, Biden painted a rather grim picture of what lay ahead for his then-running mate, saying:

Mark my words, it will not be six months before the world tests Barack Obama like they did John Kennedy…. We’re gonna have an international crisis, a generated crisis, to test the mettle of this guy.”

The snakes in the grass he listed were Russia and the Pakistan-Afghanistan border. Six months later, he doesn’t seem like a crazy fortune teller after all.

In August of 2008, Biden was making introductions at a campaign rally in Illinois when he had this silly little slip of the tongue. More of a “doh” moment than a true offense.