Responses to Obama in Cairo: the best of the talking heads

Israel: We share President Obama’s hope that the American effort heralds the opening of a new era that will bring an end to the conflict and to general Arab recognition of Israel as the nation of the Jewish people that lives in security and peace in the Middle East. Israel is committed to peace and ...

We share President Obama's hope that the American effort heralds the opening of a new era that will bring an end to the conflict and to general Arab recognition of Israel as the nation of the Jewish people that lives in security and peace in the Middle East.

Israel is committed to peace and will do all it can to expand the circle of peace while considering its national interests, first and foremost being security. 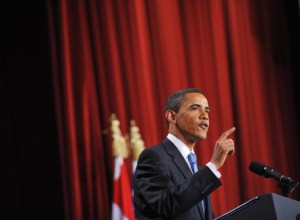 We share President Obama’s hope that the American effort heralds the opening of a new era that will bring an end to the conflict and to general Arab recognition of Israel as the nation of the Jewish people that lives in security and peace in the Middle East.

Israel is committed to peace and will do all it can to expand the circle of peace while considering its national interests, first and foremost being security.

You witness that in Afghanistan, American warplanes bomb people and kill some 150 not once, but 10 and 100 times. They kill people continually. So, terrorist groups, do what you are doing there.

If the new president of America wants a change of face, America should change this behaviour. Words and talk will not result in change.

The use of Koranic sayings plays a big part in a positive change of picture, but there is a necessity for action.

The Islamic world does not need moral or political sermons. It needs a fundamental change in American policy beginning from a halt to complete support for Israeli aggression on the region, especially on Lebanese and Palestinians, to an American withdrawal from Iraq and Afghanistan and a stop to its interference in the affairs of Islamic countries.

There’s an unjust perspective on the part of the American president toward the Palestinian issue, one that does not differ from former President Bush’s and the neoconservatives’ perspective.

Speaking about a policy of pursuing a war against extremism and working towards two states for peoples on Palestinian lands is no different from the policy of his predecessor, George W Bush.

Not only did the speech specifically reject western (and American) colonialism, its entire tone was the antithesis of colonial. This is a profoundly different American voice, one that will do much to advance American goals rather than to sabotage them.

Arab leaders who were listening to this speech might want to consider a similar speech of their own to their people.

President Obama’s journey to Saudi Arabia and Egypt could be an opportunity. It reflects both the need for an historic change in the Middle East and a unique chance of achieving it.

The Middle East requires realpolitiks. It’s indeed intriguing that Obama came to Egypt for this speech. The location and timing underline the moral choices made. And on the Middle East no less, where the means so often define the effort because the ends constantly prove elusive.

This seems connected to me to the remarkable way in which this speech is being pushed out in multiple media—on television, but also on Twitter and on Facebook and via SMS and all in multiple languages—to a global audience. Part of the rise of Obama is the rise of a post-television, post-sound bite technological paradigm … It creates a whole new world from one in which the point of a speech is just to field test a couple of zingers in hopes that one or two of them gets picked up for the evening news.

Perhaps the most curious passage was this one: “Given our interdependence, any world order which elevates any nation or group of people above any other will inevitably fail.” This is nonsense, of course, as Obama seems to recognize several sentences later when he says that America will ‘relentlessly confront violent extremists who pose a grave threat to our security.

Mr Obama has addressed Muslims before. … But this speech fulfilled his pre-inauguration promise to make a bold bid to restore American prestige with a direct public address in a Muslim capital. …

Yet the constant refrain, heard on Cairo’s streets as well as from media pundits, is that Arabs and Muslims would like to see Mr Obama’s words matched by deeds. ‘To win our hearts, you must win our minds first, and our minds are set on the protection of our interests,’ declared one of the reams of editorials, columns and open letters from across the region before Mr Obama spoke.

If they want respect, Muslim states must seek active ways to improve relations with the United States. We would like to see a generally more positive and welcoming tone, with fewer anti-American harangues in official media and firebrand sermons in state-controlled mosques. … Respect for Islam would be much more palatable if the Muslim world decriminalized conversion to other faiths and allowed true religious freedom, as Muslims enjoy in America.

The truest thing he said? “No single speech can eradicate years of mistrust.”

President Obama’s speech today in Cairo met the bar he set for himself.

The ball is now in the Arab court – he needs and deserves their help, and they have a vital interest in providing it. Arab governments, organizations and individuals should, in their own interests, move quickly to do everything possible to reciprocate and support the President’s bold gestures.

NEW FOR SUBSCRIBERS: Want to read more on this topic or region? Click + to receive email alerts when new stories are published on Foreign & Public Diplomacy, Middle East and North Africa