Poor Gordon Brown. The Scot took the reins of the Labour party and the prime ministry from Tony Blair in summer 2007, shortly before London’s financial firms (which provided a huge part of British corporate earnings) cratered, the housing bubble burst, and the global economy went to hell. In the last few months, Brown has ...

The Scot took the reins of the Labour party and the prime ministry from Tony Blair in summer 2007, shortly before London's financial firms (which provided a huge part of British corporate earnings) cratered, the housing bubble burst, and the global economy went to hell. 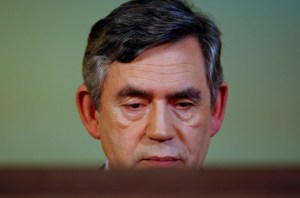 The Scot took the reins of the Labour party and the prime ministry from Tony Blair in summer 2007, shortly before London’s financial firms (which provided a huge part of British corporate earnings) cratered, the housing bubble burst, and the global economy went to hell.

In the last few months, Brown has also faced a political scandal of Clinton-type absurdity and proportion. The London Daily Telegraph unearthed evidence that numerous members of parliament had abused their expense accounts, meant for work-related costs, like travel. Hundreds of thousands of pounds went to paying for: mortgage payments for a house that does not exist, pornography, “poppy wreaths,” “life coaching” classes, plasma-screen televisions, a “floating duck island,” and “moat” and “paddock” repairs. (I think I need to become a British MP).

And yesterday, Labour was routed in local elections — a bad portent for the national election Brown must hold in the next year. The party won just 23 percent of votes, and Labour lost hundreds of local councilors.

Increasingly, members of the Labour party and other Britons have called for Brown to fall on his sword. But what would happen if he did? And how could Labour impeach him?

If Brown stepped down, Labour would nominate choices for a new leader, hold a special conference, and vote in a winner, who would become prime minister. If the party wanted to oust him, at least 70 of Labour’s 350 members of parliament would have to call for a leadership contest. That seems unlikely, although prominent members of the party have come out against him — such as former Women’s Minister Meg Munn and Pensions Secretary James Purnell, who quit yesterday.

Brown seems to have survived the local elections, reshuffling his cabinet today. But there are still rough waters ahead — the European election results will come out on Sunday night. An opposition group has said they may attempt an ouster at a special Labour meeting on Monday.

Truth is, if Brown is ousted, it will be more for politics than policies. I doubt Brown could have done much better with financial crisis (what he did during his decade-long tenure as chancellor of the exchequer is another question); economists, such as Paul Krugman, have suggested his forceful policies softened the blow. The expenses row wasn’t his fault either. Still, his leadership has been less than inspiring to members of his own party, who are turning against him.

Responding to the suggestion he needs to quit, Brown alliterated forcefully: “I will not waver, I will not walk away, I will finish the work.”

We’ll see if he holds on.

NEW FOR SUBSCRIBERS: Want to read more on this topic or region? Click + to receive email alerts when new stories are published on Politics, Europe