Fiber optic fever has hit East Africa. On Friday, June 12, the 4,500 kilometer (2,790 mile) East Africa Marine System (TEAMS) underwater cable connected the Kenyan port town of Mombasa with Fujairah in the United Arab Emirates and is expected to begin operating within three months. “Until now, the eastern Africa coast was the longest ... 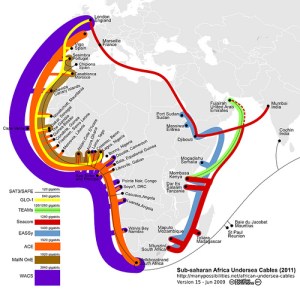 “Until now, the eastern Africa coast was the longest coastline in the world without a fiber-optic cable connection to the rest of the world,” Kenyan president Mwai Kibaki said at the launch ceremony after the cables were pulled ashore.

This great map by Steve Song shows where things will be in a few years with line thickness representing bandwith size. The TEAMS cable (green on map above) is one of three international fiber optic cables expected to reach East Africa this year.

The next (red on map) is constructed by SEACOM, a private company in partnership with a number of African companies. It has already landed, to less fanfare because the Kenyan government has a stake in TEAMS, and is supposed to be ready by the end of June, connecting East Africa to Europe and Asia. The third, the East African Marine Cable System (EASSy) is sponsored by the International Finance Corporation, the private sector wing of the World Bank and is scheduled to be finished in 2010 (blue on map).

On the other side of the continent, Africa Coast to Europe (ACE) a cable from Europe all the way down the West African coast to South Africa is underway (pdf) and projected to go online in 2011 (orange on map). Several others are also supposed to go online by that time, immensely increasing Africa’s bandwith access. Song has an interactive version of his map in which one can view any combination of the different cables or each alone to get a better look.

When the cables go online, they will replace satellite connections as the main source of internet access in Africa, increasing speed, reliability and reducing cost. This should improve productivity and allow increased access with the lower price. In Kenya, the internet company Access Kenya has already pledged that the new cables will double internet speed for its users, and companies are scrambling buy access to the broadband and to finalize internal fiber optic cables. Neighboring landlocked states like Uganda and Rwanda are seeking to do the same.

As interconnectivity between African countries increases, economic benefits are expected, especially in Kenya, which has a fast developing IT sector. Other potential impacts include education and access to media.

For a good visual of all the submarine internet cables operating or being built worldwide, check out this Alcatel-Lucent map (pdf).The more connections, the faster information can move. Most major websites are still hosted in the United States and Europe, but as Africa’s wired status improves, this could change, and locally hosted data is much faster to access.

Biden Can Reinvent American Power for a Post-Trump World