The ICC continues to fight for relevance

Leading up to today’s meeting of the African Union in Libya, the International Criminal Court (ICC) has been a sore point for Sudan’s president Omar Bashir, who was indicted by the ICC last July for war crimes related to violence in Darfur. His indictment has led to protests against the court in Khartoum like one pictured ... 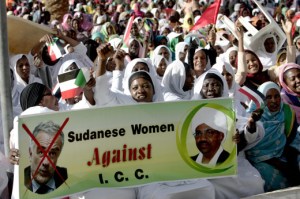 Leading up to today’s meeting of the African Union in Libya, the International Criminal Court (ICC) has been a sore point for Sudan’s president Omar Bashir, who was indicted by the ICC last July for war crimes related to violence in Darfur. His indictment has led to protests against the court in Khartoum like one pictured above on May 27, 2009.

Bashir, along with other AU leaders like Libya’s Moammar Gadhafi have criticized the court’s focus on Africa, and even gone as far as to propose in advance of the AU meeting that states should withdraw from the Rome Treaty which established the court.

Pushing back, however, have been advocates of the ICC including former U.N. Secretary-General Kofi Annan. In an op-ed yesterday in the New York Times, he defended the court against its African critics:

One must begin by asking why African leaders shouldn’t celebrate this focus on African victims. Do these leaders really want to side with the alleged perpetrators of mass atrocities rather than their victims? Is the court’s failure to date to answer the calls of victims outside of Africa really a reason to leave the calls of African victims unheeded?

Moreover, in three of these cases, it was the government itself that called for ICC intervention — the Democratic Republic of Congo, the Central African Republic and Uganda. The fourth case, that of Darfur, was selected notby the international court but forwarded by the U.N. Security Council.

The I.C.C. represents hope for victims of atrocities and sends a message that no one is above the law. That hope and message will be undermined if the African Union condemns the court because it has charged an African head of state. The African Union should not abandon its promise to fight impunity. Unless indicted war criminals are held to account, regardless of their rank, others tempted to emulate them will not be deterred, and African people will suffer.

It doesn’t look like the AU will actually decide anyone should withdraw, but the ICC is still under fairly heavy fire from other areas.  A recent article in the World Affairs Journal bytwo Darfur experts, Julie Flint and Alex de Waal blames the ICC’s controversy and dysfunctional dynamics on its Argentine lead prosecutor Luis Moreno-Ocampo. In particular they criticize his handling of the Bashir indictment and his continuing to push for a genocide charge that was rejected as too thin by ICC judges. As the Washington Post’s Colum Lynch reported yesterday, there is significant concern that Moreno-Ocampo’s efforts could undermine peace negotiations in Sudan.

Regardless of whether Moreno-Ocampo remains in charge, the dilemma of the ICC in the foreseeable future is to figure out how to position itself as an arbiter of international law, not political jockeying. In an interview last year in Uganda, ICC Registrar Silvana Arbia addressed a similar question to that now being asked in regard to Sudan: Shouldn’t the ICC be willing to be flexible to give peace agreements their best chance of success? Like her boss, she argued that allowing such machinations would undermine the legitimacy of the court, noting that “the warrants issued by the ICC cannot be used as a condition to negotiate a peace agreement.”

But with so much scorn and a suspect arrested for only one of its outstanding warrants — former Congo rebel commander Jean-Pierre Bemba Gombo — the ICC needs help if it is to accomplish its mission of discouraging impunity. Even if no one withdraws (and Chile joined this week), few governments have thus far been willing to take much actionon the ICC’s behalf. For now, it remains stuck with limited funding and no enforcement mechanism.

To preserve the ICC’s relevance, the trial of Gombo will need to go very well, and some sort of progress will be needed on the Bashir case. What are the odds either of these will happen?