The view from cyberspace on Indonesia's upcoming election.

The world was fascinated by Iran’s election last month, which dominated headlines for more than a week and had Americans reading Iranian Twitter feeds and trying to use online translators to decipher Facebook pages in Farsi. Nowhere, however, was there more apparent fascination with the tumult in Tehran than in Indonesia, the country with the highest level of proportional online interest in the election outside Iran, perhaps because Iran, like Indonesia, is a fledging Muslim democracy. After Farsi, Indonesian was the second-most popular language for Googling the two most prominent candidates, Mahmoud Ahmadinejad and Mir Hossein Mousavi.

Now that Indonesians are about to have their own election on Wednesday, July 8, a look at Internet use in the country suggests interesting patterns of voter preoccupation. Indonesia might not be the most tech-savvy country, but it’s a good example of how the Internet is upending everyone’s traditional approach to democracy.

Like the Indian elections that preceded it, the Indonesian election — the country’s second democratic presidential election ever — is remarkable in part because of its scale. Indonesia is the world’s fourth-most-populated country, the world’s largest Muslim country and certainly the largest Muslim democracy, and the third-largest democracy in the world, with 240 million inhabitants and 170 million registered voters.

The election is essentially a rematch between the two candidates who battled out the contentious 2004 election, incumbent President Susilo Bambang Yudhoyono (popularly known as SBY) and his predecessor, Megawati Sukarnoputri, who is generally called “Mega.” SBY must also fight off his vice president, Jusuf Kalla, who is running on the Golkar Party’s ticket.

Not surprisingly, primary interest in the Iranian election of early June emerged from Internet users in the Javanese cities of Jakarta, Yogyakarta, Bandung, and Surabaya, and in the Sumatran city of Medan. These are not only populous cities, but are also some the most connected. Internet penetration in Indonesia is limited to 13 million — or 5.4 percent of the population. However, its use in young demographics is spreading, as Indonesian youth are increasingly drawn to social networking sites such as Facebook and Friendster.

Despite some of these gaps in connectivity, Indonesia’s Internet patterns are still revealing in the run-up to the election. One example is the increased use of the term jilbab, or Muslim head scarf, on Facebook postings. The jilbab has become a wedge issue in the campaign. The wives of the Golkar Party candidates wear it while SBY’s wife doesn’t, something the Golkar Party has milked repeatedly to drive up support. The threefold increase of the term on Facebook wall postings suggests increased discussion and interest.

Over the same period, however, the use of the term in Indonesian Google searches has declined 20 percent. Because people use Facebook and Google for different activities — Facebook wall postings are parts of conversations, while Google searches represent genuine personal interest in a subject — the discrepancy suggests that Indonesia’s Internet denizens could be talkers rather than doers, “Facebook activists” rather than real-world campaigners. Debates over the electoral role of the jilbab may be happening on Facebook, but Google links only yield fashionable wares, as indicated by the fact that “Jilbab Paris” is one of the top queries.

Similarly, trends in Internet searches for the candidates have been suggestive. Over the past 90 days, Indonesian searches for “SBY” have led “Mega” by 33 percent and “Jusuf Kalla” by a factor of 10, though the former two candidates have comparable levels of connectivity in their respective support bases: SBY is most popular in East Java and Jakarta, whereas searches for Megawati are greatest in Northern Sumatra and West Java. Interest in SBY surpassed Megawati on May 11. Volume for his name spiked on May 16, after his announcement that Wharton-educated Boediono would join as his running mate; on June 22, after the first vice presidential debate; and on July 4, after the final televised presidential debate. Since June 27, Indonesian searches for SBY have nearly doubled, widening his online margin over Megawati by 240 percent. Further analysis of searches for Megawati indicate that Jakarta’s volume reached what Google quantifies as “breakout” proportions on the less-than-supportive query of “say no Mega.” Such data seems to confirm the incumbent’s lead in domestic opinion polls. 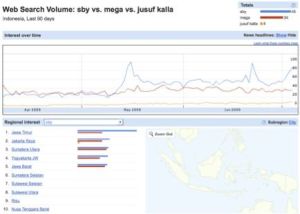 Tracking search terms in Indonesia is mostly a matter of academic interest now. But as connectivity spreads, being informed translates to being influential, political will moves from the router box to the ballot box, and then relative movement in search volume will become a real-time barometer of opinion. Indonesia’s 5 million poll workers — spread over 500,000 polling stations — may not want to admit it, but there could come a time when online tools will be able to predict outcomes even better than they can.