This past Monday, President Obama met with the heads of a number of prominent Jewish groups, to talk about the state of U.S.-Israeli relations and the future direction of U.S. Middle East policy. Virtually all the news reports I’ve seen suggest that the attendees had a cordial and candid discussion. After reading through various accounts, ...

By Stephen M. Walt, the Robert and Renée Belfer professor of international relations at Harvard University and a columnist for Foreign Policy.
July 16, 2009, 10:00 PM 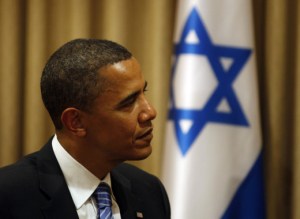 This past Monday, President Obama met with the heads of a number of prominent Jewish groups, to talk about the state of U.S.-Israeli relations and the future direction of U.S. Middle East policy. Virtually all the news reports I’ve seen suggest that the attendees had a cordial and candid discussion. After reading through various accounts, I have three comments.

First, although a few individuals in the Israel lobby continue to downplay its influence, the very fact that this meeting was held is additional testimony to its important role in shaping U.S. Middle East policy. Why was Barack Obama taking time from his busy schedule to meet with the heads of groups like AIPAC, the Anti-Defamation League, J Street, Hadassah, and the Conference of Presidents of Major American Jewish Organizations (among others)? Simple: he knows that these groups have a lot of political power. He also knows that the success of his Middle East policy depends in large part on getting significant support from them. In a political system like ours, where well-organized interest groups routinely wield disproportionate influence over the issues they care about, holding a White House sit-down with these key leaders was smart politics.

Second, the meeting also makes it clear that there have been significant changes within the lobby over the past several years, and that there is an evident rift between those who think the United States should continue to the same “special relationship” with Israel, and those who believe that it would be in Israel and America’s interest if Washington adopted a more candid and nuanced policy toward the Jewish state. It is noteworthy that the invitees included representatives from both J Street and Americans for Peace Now — groups that openly favor a two-state solution and have been backing Obama’s campaign to halt all construction in the settlements. Maybe even more noteworthy, the more hard-line groups were remarkably restrained in defending the settlement enterprise.

What’s going on here? Some of these developments reflect the more open discourse that has begun to emerge on Israeli policy and the U.S.-Israeli relationship. Thankfully, it is no longer taboo to discuss these subjects, as it once was. This shift is occurring in good part because a growing number of American Jews are worried that Israel is on a path to become an apartheid state, and that the United States has been enabling that development by giving Israel generous and unconditional support.

The failed Lebanon war of 2006 and the brutal onslaught against Gaza earlier this year have also raised concerns that Israel has lost its moral and strategic compass. You know a country is in trouble when it routinely attacks respected human rights organizations like Amnesty International and Human Rights Watch, or when a group of its own soldiers releases damning personal testimony about their own misconduct in Gaza. (The courage and candor of these Israeli dissidents remains a redeeming feature of Israel’s otherwise troubled democracy). And you know the hardliners in the lobby are getting desperate when they have to hire a professional spinmeister to come up with Orwellian talking points defending the occupation, such as the bizarre claim that removing illegal settlers from the West Bank would be a form of “ethnic cleansing.” (For more on the latter shenanigans, see Richard Silverstein’s valuable commentary here, here, and here.)

Third, it is also clear that the hard-line leadership remains trapped in old-think on a lot of these issues. For example, ADL head Abraham Foxman complained before the meeting that “What troubles me most is a lack of consultation and the need [for the administration] to do things publicly. There’s a [U.S.-Israel] relationship of 60 years and all of a sudden they’re treating Israel like everyone else. I find that disturbing.” In the same vein, Malcolm Hoenlein of the President’s Conference reportedly told Obama at the meeting that differences between the U.S. and Israel should be kept private, and that progress toward peace had only occurred when there was “no daylight” between American and Israeli leaders.

To his credit, Obama immediately pointed out the flaw in that line of argument, saying “For eight years, there was no light between the United States and Israel, and nothing got accomplished.” He might have added that there was precious little daylight during the Clinton years either, which is one of the many reasons why the Oslo process came to naught.

What Foxman and Hoenlein still don’t understand is that the special relationship is in fact harmful to the United States and Israel alike. It has allowed Israel to pursue foolish policies — like building settlements — and implicated the United States in them. Israel would be much better off if the United States did “treat it like everyone else,” or at least like other democracies. If it did, the U.S. would back Israel when it acts in ways we deem desirable, but U.S. leaders would criticize and oppose Israel’s actions when they are contrary to U.S. interests or values. In the end, a normal relationship between the two countries would be far healthier than the “special relationship” that Hoenlein and Foxman have long defended.

On this point, Obama could have quoted former Israeli foreign minister Shlomo Ben-Ami, who notes in his excellent book Scars of War, Wounds of Peace that the two presidents who made “meaningful breakthroughs on the way to an Arab-Israeli peace” (Jimmy Carter and George H. W. Bush) succeeded because they were “ready to confront Israel head on and overlook the sensibilities of her friends in America.” Obama is actually employing a smarter approach than these two predecessors. Like Carter and Bush, he appears to be willing “to confront Israel head on,” but instead of “overlooking” the sensibilities of pro-Israel groups, as they did, he is doing his best to bring them along. Jeremy Ben-Ami of J Street put the point well after the White House meeting: Obama “knows how to push while he’s hugging.”

Obama also made it clear that the Palestinians and the Arab states also need to do more (a point that Secretary of State Hillary Clinton underscored in a major speech yesterday), and that Washington will have to put pressure on all sides. But the United States has lots of experience putting pressure on the Palestinians and the Arabs — in fact, one attendee at the meeting quoted Obama as saying that U.S. pressure on the Arabs is a “dog bites man” story — so that will not be hard to do. Pressuring Israel, on the other hand, has been a much rarer occurrence, but it is now necessary if Obama hopes to move toward a two-state solution and foster lasting peace between Israel and the Arab states around it. If he sticks to the positions he’s already outlined and follows through — and if the leaders he met with on Monday have the good sense to back him — Obama just might succeed.

Stephen M. Walt is the Robert and Renée Belfer professor of international relations at Harvard University and a columnist for Foreign Policy.