A front-row seat to the Republicans' debate over foreign policy, including their critique of the Biden administration.

By Peter Feaver I had some sympathy for the Obama folks when I read this newspaper account of yesterday’s meeting with Iraqi Prime Minister Maliki. Apparently, it was a solid, business-oriented meeting. And since President Obama has reportedly stopped holding regular video-teleconferencing with Maliki (a staple of US-Iraqi relations under the last Administration), this meeting ... 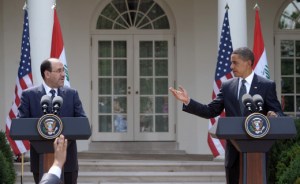 I had some sympathy for the Obama folks when I read this newspaper account of yesterday’s meeting with Iraqi Prime Minister Maliki. Apparently, it was a solid, business-oriented meeting. And since President Obama has reportedly stopped holding regular video-teleconferencing with Maliki (a staple of US-Iraqi relations under the last Administration), this meeting was especially important.

What caught my eye was President Obama’s comment at the end of the story: “”Overall,” Obama said, “we have been very encouraged by the progress that has been made.”

This statement struck me as both honest and misleading. Honest, because if you start with a January 2007 frame of reference — say then-candidate Obama’s claim that surge was going to have no impact on violence — then the progress has been remarkable and very encouraging. But it also struck me as misleading in the sense that it did not also say that the recent spike in violence, and even more the recent flare-up of Arab-Kurdish tensions, is undoubtedly discouraging, and I would be surprised if the Obama team did not feel the same. Of course, as the Post story related, Obama also acknowledged that there are “tough days ahead” in Iraq. But the overall message was one of progress, a word he invoked 6 times in the prepared remarks and 3 times in the answer to the first question and that is the lede for the story.

That got me wondering: would those folks (say the mainstream Bob Woodward or Tom Ricks, let alone other people in the nuttier fringes of the Bush-bashing chorus) who established a cottage industry lambasting Bush Administration rhetoric as “happy talk” rise up and start calling a foul on President Obama? President Bush regularly caveated his statements of progress with reminders that there were “tough days ahead” and, if memory serves, Rumsfeld was the guy who coined “long, hard slog.” In their coverage of Bush, sometimes the reporters would include mention of the caveats and qualify their lede accordingly; sometimes the reporters would include mention of the caveats and yet stick to a “happy talk” lede; and sometimes the reporters would simply omit any mention of the caveats, perhaps the better to advance the “happy talk” lede. Regardless of how many times President Bush presented carefully caveated assessments, the Bush-bashers could always rest their indictment on one or two off-the-cuff uncaveated remarks.

At what point will Obama’s rhetoric on Iraq suffer this same fate? I hope never and, even more, I hope it never deserves to. It is appropriate for President Obama to balance “if it bleeds, it leads” coverage with mention of developments that are not getting as much press attention. And it is appropriate for President Obama in public to exhort the Iraqis towards greater progress by emphasizing the positive rather than dwelling on the negative. In fact, President Obama has talked so little in public about Iraq I would welcome virtually anything he said. Of course, I also hope that President Obama is as candid and clear-eyed about the challenges in private as his predecessor was, and I hope he continues to offer appropriate caveats even if he is stressing a publicly optimistic message. If the “happy talk police” give him the free pass they never gave his predecessor, so be it. The Iraqi challenge is hard enough without having to duck “police” brutality, even if it is only rhetorical.

Peter D. Feaver is a professor of political science and public policy at Duke University, where he directs the Program in American Grand Strategy.

It’s Time for a Reckoning on Torture