In praise of intemperate leaders…

As Barack Obama gradually makes the difficult transition from being both a campaign brand and a transformational icon to being a real, live working human president of the United States, it’s only natural that his quirks, idiosyncrasies and unscripted moments dominate the headlines for a while. Last week we had the deeply disturbing revelation about ... 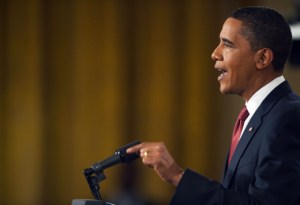 As Barack Obama gradually makes the difficult transition from being both a campaign brand and a transformational icon to being a real, live working human president of the United States, it’s only natural that his quirks, idiosyncrasies and unscripted moments dominate the headlines for a while. Last week we had the deeply disturbing revelation about the fact that he has his jeans ironed and the apparently shocking fact that he has actually been shaped by the experience of growing up black in America.(Regardless of where he was born, joked the blogger uncontrollably.)

There is really no excuse for the jeans thing. Even if they were ironed by the First Pants Presser to constitutional specifications once established in consultation with Mr. Levi Strauss (inventor of blue jeans and thus despite his Bavarian roots, the coolest Jew of the American West), the president didn’t have to put them on.

As for the whole being African American thing, I for one, being a keen observer of America politics, was not surprised. I’m actually of the view that having people with different kind of experiences in high offices is a good thing…and that presidents having unguarded moments in which we see what they really feel sans teleprompter is healthy for all involved. (Yes, I even like the idea of Sonia Sotomayor being a justice precisely because she will bring a different perspective and set of sensitivities to the court.  Concern about the absence of such diverse views is presumably the reason no one thinks we ought to have an all white male court, right?) So when he expressed his views on the Gates affair, I was not as bugged by it as many people. Sure, he may have stepped on his health care message and yes, the cop’s side of the story is persuasive, but regardless of the circumstances I don’t think that if Gates were white regardless of the police circumstances that he would have been hustled out of his own house in hand cuffs.  Rather than assuming the worst about accomplices, the cops probably would have paused and given him the benefit of the doubt.

In any event, to me the weirdest part of the whole experience was the New York Times online summary of the story in which they referred to the president’s remarks as one of the few times we have seen what it is like to have an African-American in the White House. Huh? What exactly were they expecting? Jay-Z conducting the Marine Band? Everything the president does is illustrative of what it means to have an African American president in the White House including all the things that are exactly the same as having a white president. Isn’t that the point? What they meant, of course, was the Gates case was one of those instances where we see how Obama’s life experience may have produced a reaction that was unlike that a white president might have had. And all I can say is, I hope we see more reactions like that. We are better off for having had the discussion his comment triggered.

Further, tiptoeing around issues out of fear of triggering Twitterstorms results in statements that are so empty and high in hot air content that they could better be characterized as soundburps than soundbites. Want to know what that sounds like? Read the vast majority of the statements coming out of the U.S.-China Strategic Economic Dialogue. These are very important meetings but you wouldn’t know it to listen to the weak metaphors and anodyne generalities of the public statements. (It all reminds me of the current crisis in fortune cookies. Have you noticed how Chinese restaurants these days offer fortune cookies that don’t actually have fortunes in them? They have bland observations about the benefits of good weather or being kind to animals. Who came up with the notion that we really want bland observation cookies?)

Not surprisingly, this track leads us directly to Joe Biden, already the subject of comments on this site by Dan Drezner and Peter Feaver. Dan thinks Biden was stupid to tell the truth about Russia (which is essentially what Biden did.) Peter thinks this is a relationship that could use some truth-telling. The Russians feigned outrage. (Conveniently ignoring some of the differing perspectives that reportedly exist between, say, Medvedev and Putin on some key issues.) As you might be able to discern from the above, I’m more in Peter’s camp on this. In this case, it helps us if the Russians know that Biden’s view exists within our government. And in this instance, it doesn’t hurt so much if they’re offended.

But even as one who enjoys tweaking the VP for his occasional gaffes, I can’t help but think we learn a lot more from unguarded remarks than from the other kind…which may be characterized as many things but the truth is not one of them.