Wanat (IX): note from the mother of a fallen soldier

Here is a thoughtful note I received from the mother of a soldier who fought and fell at Wanat. It speaks for itself. I am of course posting it with her permission: Dear Tom, I am the mother of Cpl. Jason Bogar, killed in the battle of Wanat, Afghanistan. I am so thankful for your ... 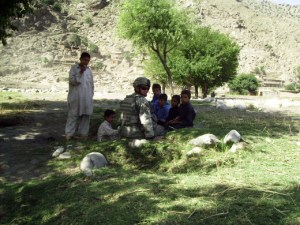 Here is a thoughtful note I received from the mother of a soldier who fought and fell at Wanat. It speaks for itself. I am of course posting it with her permission:

I am the mother of Cpl. Jason Bogar, killed in the battle of Wanat, Afghanistan. I am so thankful for your superb coverage of the heartbreaking incident and the military’s subsequent lack of transparency in its circumstances. I believe your articles will bring awareness and ultimately justice to the situation. There needs to be accountability from the US Army and many times that only happens when great investigative journalists like you cover a story. Please keep up the fabulous work and intense pressure on the issue.

I do have a concern, however, with your blog of yesterday. I believe certain parts stereotype the soldiers of Chosen Company as people who were disgusted with the Afghan culture and had no contact with it. That is simply not true, as these photos my son shot reveal (he also expressed his respect for much of the Afghan culture in emails). I am sending you several pictures, out of the hundreds he sent home, of the Chosen Company interacting with the Afghan population in the Waygal Valley.

Here are the quotes that concern me:

“In addition, while Ostlund, commander of the 2nd Battalion, 503rd Infantry Regiment, part of the 173rd Airborne Brigade, has stated that he was carrying out a COIN campaign, with a focus on ‘living with the population,’ the report finds that statement to be inaccurate. ‘This was not the case in the Waigal Valley, where the paratroopers occupied only two COPs, and had almost no interaction with the population.’ The report finds the statement of one machine gunner in the unit to be more accurate: ‘We didn’t interact with them…They didn’t come near us and we didn’t go near them.’ Underscoring the hazy grasp Ostlund and his subordinates had of COIN, the report says, they were precise about the number of engagements they had, and even the number of bombs and missiles fired, but were ‘unable to provide commensurate statistics’ for their efforts to actually help the local population.

The report quotes one soldier’s view was representative: ‘These people, they disgust me…Everything about those people up there is disgusting. They’re worthless.’ This is not an attitude that tends to produce productive relationships.”

I’ve read this quote in the Cubbison report and the two soldiers quoted are men who I do not recognize as anyone from the Chosen Company involved in the battle at Wanat (I do think Cubbison does a marvelous job otherwise in his report).

The Brass ordered the terrible indiscriminate bombing of this area and should definitely be held accountable. Certainly some soldiers in the trenches became callous, but for most of them, they were carrying out orders and felt they were targeting the Taliban and not civilians.

Thank you again for the attention you’ve drawn to the injustice that occurred at Wanat. Please feel free to call or email me.

As I read it over a second and third time, I thought about what this woman has endured, and how carefully she chooses her words.

Thomas E. Ricks covered the U.S. military from 1991 to 2008 for the Wall Street Journal and then the Washington Post. He can be reached at ricksblogcomment@gmail.com. Twitter: @tomricks1
View
Comments
Tags: Afghanistan, Central Asia, Military