For Passport readers who haven’t yet noticed, FP launched a swanky new AfPak channel today in a team effort with the New America Foundation. Among the many features, Jean MacKenzie offers a preview of the Afghan elections scheduled for August 20 and a look at the leading candidates.  According to MacKenzie, who is in Afghanistan ...

For Passport readers who haven't yet noticed, FP launched a swanky new AfPak channel today in a team effort with the New America Foundation.

Among the many features, Jean MacKenzie offers a preview of the Afghan elections scheduled for August 20 and a look at the leading candidates. 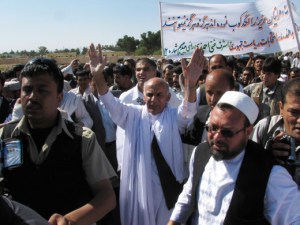 For Passport readers who haven’t yet noticed, FP launched a swanky new AfPak channel today in a team effort with the New America Foundation.

Among the many features, Jean MacKenzie offers a preview of the Afghan elections scheduled for August 20 and a look at the leading candidates.

According to MacKenzie, who is in Afghanistan working for the Institute for War and Peace Reporting, current president Hamid Karzai is still the favorite, but former foreign minister Abdullah Abdullah is gaining ground quickly. Additionally, MacKenzie notes, though he is generally thought to be a distant third, former finance minister and World Bank employee Ashraf Ghani (seen above) could play a crucial role if no candidate wins 50% of the vote and the election goes into a runoff. Support from Ghani could give Abdullah a tremendous runoff boost and help him siphon some of Karzai’s Pashtun base:

Ghani has the advantage of being Pashtun in a country where the majority of the electorate comes from that ethnic group. Abdullah claims a Pashtun father, but is more closely associated with the Tajiks.

MacKenzie follows up on the Ghani as kingmaker idea in an article for the Global Post. She notes that although Karzai’s team has reached out, Ghani is not interested.

Ghani has flatly rejected any position in a Karzai administration. In an earlier interview, at the start of his campaign, he poured scorn on his rival, and on the idea that a CEO would be able to help.

“I find it ironic that the head of one of the most incompetent administrations in our history is simultaneously discussing … having a babysitter,” Ghani told Global Post. “That means he’s a ward, a child who needs to be attended to, who is incapable of governing.”

And just in case there was any doubt who Ghani might lean toward in a runoff scenario where he is not a candidate, here he is today with an op-ed in the Wall Street Journal (I wonder if his campaign advisor, James Carville had anything to do with placing it):

Over the past five years President Hamid Karzai has turned Afghanistan into one of the world’s most failed and corrupt states. Instead of leading our country toward democracy, he has formed alliances with criminals. He has appointed governors and police chiefs who openly flout the rule of law. And he has turned a blind eye to a multibillion-dollar drug trade that has crippled growth and enabled the insurgency to flourish.

In a country where reliable polling is non-existant, anything could happen, and the election might not get to a runoff. But if it does, an Abdullah-Ghani alliance could provide some excitement.

For more AfPak excitement, like a photo history of the war in Afghanistan and a look at the U.S. narcotics policy there, check out the new channel.

<p> Michael Wilkerson, a journalist and former Fulbright researcher in Uganda, is a graduate student in politics at Oxford University, where he is a Marshall Scholar. </p>
Tags: Afghanistan, South Asia