Is Karzai in Trouble?

Afghanistan should, perhaps, be called the “graveyard of expectations.” Every time the shrewd analyst thinks he knows what is going to happen, the picture shifts. The country’s presidential election, scheduled for August 20, is no exception. Just a few weeks ago, pundits were nodding sagely at the political astuteness of the incumbent, Hamid Karzai. He ...

Afghanistan should, perhaps, be called the “graveyard of expectations.” Every time the shrewd analyst thinks he knows what is going to happen, the picture shifts. The country’s presidential election, scheduled for August 20, is no exception.

Just a few weeks ago, pundits were nodding sagely at the political astuteness of the incumbent, Hamid Karzai. He has spent the past year assiduously courting and bullying the tribal leaders and strongmen who control the country, promising them jobs, perquisites, forgiveness of past sins, even the odd province or two. The process might have been a bit unsavory, but international election experts were saying they expected a “fair enough” referendum on Karzai’s tenure — in which, both inside Afghanistan and abroad, the president’s re-election was thought to be a sure thing.

Who is likely to win — and why?

Now, with just two weeks to go before the ballot, what had been a yawn of a race is suddenly a pulse-pumping sprint for the finish, with no clear winner in sight. What rocked Karzai’s formerly sturdy campaign boat? To understand the exciting and confusing contest, the careful observer should pay attention to a trio of contenders and at least two governments — and be prepared for the unexpected.

A number of factors have contributed to the upset. First, there has been the surprisingly strong showing of Dr. Abdullah Abdullah, Karzai’s former foreign minister. He has marshaled his old Northern Alliance connections into an effective campaign team. Their tactics seem not to differ significantly from the bullying and buying-off favored by his chief rival. But widespread anger and disappointment with the current regime in Kabul may well propel Abdullah into a strong second-place showing, robbing Karzai of what was thought to be an easy first-round win. (To win the presidency, a candidate must garner more than 50 percent of the vote. If none of the 37 remaining candidates wins this majority, the top two go to a runoff election in early October.)

The second wild card in the deck has been the attitude of the United States. It is almost a cliché among Afghans that the next president will be chosen in Washington — after all, Karzai was hand-picked to head the Interim Government in 2001 by then-U.S. Special Envoy Zalmay Khalilzad, who is Afghan-born.

Although U.S. officials have stated publicly and repeatedly that they will neither support nor oppose any candidate, the conspiracy-happy Afghans have been watching for subtle signs like soothsayers examining chicken entrails. Rumors from diplomatic insiders have pointed strongly to a move away from Karzai in the Obama administration, with U.S. heavyweights cozying up to his opposition. Karzai has been isolated: Diplomats hold direct talks with regional representatives, by-passing the authority of the central government and undercutting the president. Plus, those in the know say there is a plan afoot to form a coalition of leading candidates to oppose the incumbent.

Abdullah may well amass enough votes to spoil Karzai’s immediate victory, but he is unlikely to squeak into the presidential palace without some help from the third-most powerful candidate, Ashraf Ghani Ahmadzai.

Ghani is a brilliant and temperamental former finance minister, credited with getting Afghanistan back on its feet immediately after the collapse of the Taliban regime. It wasn’t easy: He had to contend with empty coffers, several competing currencies, and an international community in favor of temporarily dollarizing the economy. Ghani managed to create a stable monetary system, and set the stage for investment and development, but quit abruptly in 2004 over disagreements with Karzai.

Ghani has the advantage of being Pashtun in a country where the majority of the electorate comes from that ethnic group. Abdullah claims a Pashtun father, but is more closely associated with the Tajiks.

Also, Ghani is one of the few leading contenders whose hands are not stained with blood from the tumultuous civil war period, in the mid-1990s. He left Afghanistan during the Soviet occupation, and spent 24 years accumulating advanced degrees and prestigious jobs in the United States. He has a doctorate in anthropology from Columbia, has done stints in the World Bank, and was reportedly in the running to replace Kofi Annan as secretary-general of the United Nations.

He is running a distant fourth, if the one recent even remotely credible poll, conducted in July by the International Republican Institute, is to be believed. But Ghani’s brilliance was on prominent display in a televised debate with Abdullah last month, watched by an estimated 10 million Afghans. It did Karzai little good when he backed out at the last minute, especially when the sponsors opted to leave the president’s empty podium on center stage. Ghani is campaigning vigorously, and insists that he can win. This is highly unlikely, but he could provide Abdullah with some much-needed gravitas.

Both men are very much in U.S. sights, with close and high-level contacts both within the Embassy and the administration, say those inside the campaign. Special Envoy Richard Holbrooke, on a recent visit to Afghanistan, met with “the leading candidates” — Abdullah, Ghani, and Mirwais Yassini, a well-connected but little-known parliamentarian.

On his trip, Holbrooke mystified reporters with his remark that the current campaign was “the first contested elections in Afghan history.” Essentially admitting the 2004 poll was little more than a well-staged rally for the new order, he inadvertently touched on another important thread in the election drama: Afghans’ changing perception of the legitimacy of their government and the occupation.

In his first campaign, Karzai, who by then had been head of the interim Government for nearly three years, had little real opposition, despite the 17 hopefuls running against him. He enjoyed the clear backing of the United States, which was bankrolling his government and showering him with praise. Karzai was treated to bi-weekly phone calls with President George W. Bush, and Zalmay Khalilzad, who by 2004 was the U.S. ambassador to Afghanistan, seldom left his side.

In 2004, American support conveyed legitimacy; while there were many snipes that Karzai was little more than a U.S. “puppet,” most Afghans were happy enough with the prospect of generous American aid to turn out in record numbers to vote for him. He won handily in the first round, with 54 percent of the vote. 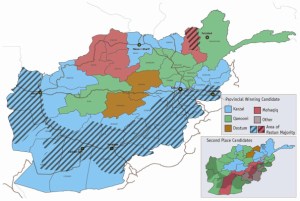 This map, produced by the International Council on Security and Development (pdf), shows the results of the 2004 presidential election. Karzai, in blue, won a sweeping victory; the striped areas show areas that are majority Pashtun, the country’s largest ethnic group, of which Karzai is a member.

This time, Karzai is campaigning in a different country. Eight years of foreign occupation and corrupt governance have extinguished the hopes of generations of Afghans. “We were very excited in 2002,” said Hakimi, a young journalist in Kabul. “We wanted to work for our country, for freedom, for democracy. But since then I have seen it get worse and worse. Now I have very little hope.”

The disappointments of the past eight years have been legion — the failure of promised assistance programs, the return of the Taliban to large swaths of the country, an increasingly onerous but still necessary foreign occupation, an explosion in poppy production that has made Afghanistan the world’s No. 1 narco-state, runaway corruption within the government and the growing dominance of venal and vicious “warlords” in many areas. The danger is that growing numbers of Afghans associate these evils with a defect in the democratic system of government.

For that reason, the 2009 elections are about more than the choice of a new leader. August 20 will serve as nothing less than a referendum on democracy itself — and “perhaps Afghanistan is not ready” Hakimi, the journalist, said.

Votes for Karzai in 2004 presidential election:

Using data from the Independent Election Commission (IEC) of Afghanistan, this map shows the percentage of voters who cast ballots for Hamid Karzai in the 2004 presidential election by province. With 51 percent of the national vote, Karzai won an overwhelming victory against his opponents five years ago: runner-up Yonus Qanoni had only 14 percent of the vote.

Support for Karzai in May 2009

This map shows the percent of people polled by the International Republican Institute (IRI) in May 2009 who said they would vote for Hamid Karzai in an upcoming election. When compared with the percentage of voters for Karzai in 2004’s presidential election (above), it is clear that the incumbent president has significantly low voter retention. Some of the greatest losses in support have occurred in provinces that were once Karzai strongholds, like Paktia and Helmand.

Turnout will almost certainly be a factor in the result: In some parts of the country, particularly in the Pashtun provinces of the south and east where the Taliban hold sway, up to 20 percent of polling stations will not even open, according to the Independent Election Commission, the state election board. Those that do manage to function may attract as few as 10 percent of registered voters, given the robust Taliban campaign of threats and intimidation. Using tried and true tactics, such as night letters and trucks with blaring loudspeakers, the insurgents warn residents that anyone caught with a tell-tale stained finger — voters are asked to dip their index finger in indelible ink — will be beaten or killed.

Observers worry that low turnout could pave the way for massive fraud — election workers could simply fill in ballots for those who do not show up. The Taliban have also promised to disrupt the vote with direct attacks, a threat that many are taking quite seriously. The United Nations is sending many staffers out of the country during the election period, as are several embassies, including that of the United States.

Whatever happens on August 20, the real excitement will start two weeks later, when the preliminary results are announced. If Karzai is awarded a first-round victory, it could lead to serious, and unpredictable, consequences. Abdullah’s campaign manager has already warned that their supporters will not accept a Karzai win. Ghani has appealed for calm, asking the international community and the candidates to agree in advance on a standard for legitimacy of the elections, and to design a mechanism for redress if the results are deemed fraudulent.

Iran’s post-election experience in June is still fresh in people’s minds here; there is a real possibility of violent, perhaps uncontrollable, outbursts of public rage if the vote is obviously juggled. The international troops and Afghanistan’s own security forces say there is nothing to worry about. But expectations in Afghanistan can be very dangerous indeed.