What price engagement? Did Jim Webb give the Burmese a “leave her in jail free” card?

Sometimes diplomatic initiatives produce progress. But sometimes they produce just the illusion of progress. The best known example is that our efforts to promote democracy worldwide have produced a major uptick in the number of countries that conduct elections but that in many of those countries that’s as far as democracy goes. In fact, from ... 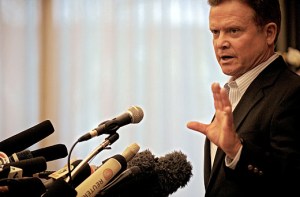 Sometimes diplomatic initiatives produce progress. But sometimes they produce just the illusion of progress. The best known example is that our efforts to promote democracy worldwide have produced a major uptick in the number of countries that conduct elections but that in many of those countries that’s as far as democracy goes. In fact, from Russia to Venezuela the appearance of democracy is used to legitimize rulers with anti-democratic intentions.

The Obama administration is going to need to be very careful to make sure that we don’t fall into the same trap with “engagement.” Just as we need to upgrade our definition of democracy to include not just elections but checks and balances, the preservation of the rights of minorities, and the other legal guarantees necessary to ensure the survival of the culture and intent of true democracy, we are going to need to ensure that we don’t accept as the fruits of engagement empty gestures or other forms of pseudo-progress that actually empower, elevate or play into the hands of problem regimes without actually advancing our interests in material ways.

The release of John Yettaw to Senator Jim Webb illustrates just how tricky the engagement calculus is. Yettaw is the Missouri man who said a vision compelled him to swim a lake to visit Aung San Suu Kyi, the Nobel Peace Prize-winning Burmese democracy champion who has been under house arrest for most of the past two decades. His entrance into the home in which Suu Kyi is confined resulted in a three year extension of her term of house arrest despite the fact that she had nothing to do with the incident.  This term was cut to 18 months by the leader of Burma’s military regime Than Shwe. Nonetheless, the central wrong here is that a woman whose party enjoyed a massive victory in Burma’s quickly and brutally quashed 1990 effort at democracy, a woman the Burmese people had selected to be their Prime Minister, is now going to be unjustly imprisoned for another year and a half for something she did not do.

Yettaw is thus a pawn in a bigger game and to the supporters of Suu Kyi it appears the U.S. has been played in precisely the way that was discussed on this blog last week. Webb, chairman of the Senate Foreign Relations Committee Sub-Committee on East Asian and Pacific Affairs, comes out with his man and his headlines and support for his conclusion that a thaw in the U.S. relationship with Burma would benefit us. But the injustice against Suu Kyi is prolonged even as her jailers receive a reward for undoing a secondary wrong that they had already capitalized on as a pretext for continuing policies that amount to nothing less than keeping a boot on the throat of the Burmese people. In other words, thanks to this intervention, both the arrest and the release of John Yettaw provide benefits to the Burmese regime and none to democracy, Suu Kyi or America’s true interests in the country.

Apparently, according to preliminary reports, one of Webb’s more substantial diplomatic “successes” was being allowed to see Suu Kyi. But according to a story by Seth Mydans in the New York Times, during that visit Suu Kyi and Webb may even have had a disagreement over the issue of continuing sanctions against the Burmese regime. Mydans suggested that Suu Kyi felt they had value. Webb reportedly argued that since so many countries in the region did not honor the sanctions that they were unenforceable and thus not a useful tool. While there is an undeniable practical reality to Webb’s point, sometimes sanctions are useful even if they are not 100 percent effective, especially if the cost to the sanctioner, the U.S. in this case, is comparatively minor. In other words, since sanctions are a diplomatic tool, the metrics used to assess their value need to be more than just economic. If they send a message, advance a principle and complicate the lives of the targeted country or regime without causing damage to us that outweighs the (even limited) benefits then retaining them may make some sense. Just as winning a diplomatic “victory” may not make sense if it actually, on balance, benefits an adversary or undercuts our national interests or both.

Is there a path to engagement with the Burmese leadership that might be worth pursuing? Of course. And it may well be that gains from Webb’s visit outweigh the negatives. It is too early to tell because thus far all the Burmese have done is what is easy for them and the only way to measure progress will be when they start doing things that are hard — like freeing Suu Kyi or actually allowing free elections to take place.

There is never harm in dialogue that clarifies or advances our position. We should even be willing to shrug off claims by the other side that such dialogue represents a “victory” for them if it is we are net beneficiaries — as I believe we were in the case, for example, of the release of the two American journalists from North Korea. In that instance, we got back Laura Ling and Euna Lee and the North Koreans at best, got a photo op with a stony-faced former U.S. president. Here, we got our prisoner back but in so doing appeared to be doing so by throwing Suu Kyi further under the bus and, inadvertently no doubt, underscoring differences between us and the revered leader of that country’s democracy movement. We got one addled American but the Burmese junta got a “leave her in jail free” card and the perception that the U.S. might be willing to move forward with further engagement on better terms than might have been available in the recent past (better for the regime, not necessarily better for the 2100 political prisoners in Burma.)

The Bill Clinton visit was engagement with a purpose and with a carefully limited downside. The Webb visit, at first glance, appears not nearly so deft. The commitment to engagement with Iran falls somewhere in the middle with our reluctance to condemn the Iranian government’s repression of its own people following a seemingly stolen election seen as either not giving enough support to reformers or, alternatively, not “tainting” the demonstrators with our support. It all depends on who you talk to. In yet another case, that of Cuba, we seem to be willing to require a clear quid pro quo for every future concession we may make, a much stricter standard than seems to be the case in some of these other instances. (Cuba must move toward democracy. Burma must move toward what? Repression that doesn’t involve Americans? To my mind, until Suu Kyi is released a substantial change in our policy is not called for.)

Webb says he was not an official emissary of the administration. Bill Clinton said the same thing. Clearly, in both instances this particular bit of diplomatic kabuki theater is transparent to all. Webb is the regional subcommittee chair on a critical Senate subcommittee, he is close to the administration, was briefed by them before his trip and promises to brief them on his return. At no time did they renounce the trip and he traveled on a U.S. government plane. His visit was official and the credit for the release of Yettaw and the potential negative consequences of the mission must accrue to the president and his team.

Personally, I think making engagement a centerpiece of a new U.S. foreign policy is a major positive development for which the administration deserves great credit. But as with any such new initiative, we need to be careful about how we approach it prior to getting all the bugs worked out. The Webb mission, even with is success in terms of securing the release of Mr. Yettaw, winning a session with Suu Kyi and engaging in a rare exchange with the leader of the regime, raises important concerns that need to be addressed if the new policy is to work to our best advantage in the future.