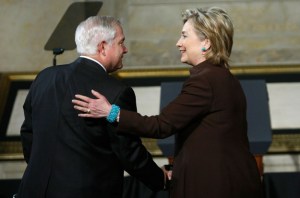 U.S. Secretary of State Hillary Clinton announced earlier this summer that the State Department will issue an inaugural “Quadrennial Diplomacy and Development Review,” or QDDR. Due out in its preliminary form this fall, the QDDR is modeled on the Defense Department’s “Quadrennial Defense Review” (QDR), the four-year planning exercise conducted by the Pentagon that outlines its broad goals and budgetary needs. Clinton has made strategic planning and interagency cooperation priorities for the QDDR. As she rightly put it, “we need to work better, work smarter, and work together with more partners in and beyond our government.” Indeed, the challenges the State Department will face over the coming decades require solutions that do not conform neatly to existing bureaucratic divisions, particularly countering the spread of terrorism and weapons of mass destruction and managing climate change, pandemics, and regional conflicts. A smooth and efficient interagency process that optimizes the abilities and knowledge of key U.S. foreign-policy organs is essential to tackling these complex challenges that reach beyond the capabilities of any single department.

Even with a mushroomed budget — which President Barack Obama has requested be increased 40 percent, bringing the total to $51.7 billion for all State Department programs — it remains to be seen whether the QDDR exercise and the accompanying requests for better interagency communication will bring rigor to the effective management of State Department programs. An enhanced budget and an ambitious call for interagency melding is not enough. It is one thing to argue for higher budgets for lofty goals, as the department has done in the past. It is quite another to show real results. QDDR recommendations must push for clear lines of accountability for members of the interagency process and work to reform the department’s bureaucratic culture from one that all too often rewards the “need to know” mentality to one that encourages and rewards a culture of information sharing, collaboration, and accountability for real results linked to budgetary allocations.

Ossified bureaucratic cultures are a problem not just at the State Department, but in most agencies that attempt to address those 21st-century challenges that belie departmental categorization. In the case of terrorism, for example, classification of methods as well as materials within agencies has led to a dearth of information. One key drawback of this overclassification is found at the local level, where law enforcement agencies, which carry out the majority of day-to-day counterterrorism efforts, sometimes lack timely information.

Climate change is another example. Posing obvious security issues, such as destabilizing migrations of refugees, water wars, disease outbreaks, and drastic economic consequences, climate change also implicates foreign affairs and bilateral relationships, particularly with China. Yet, this issue has in the past been divided between the departments of Energy, State, and Treasury, among others, with no overarching point of contact for discussion of overall methods, goals, and information. At the agency level, addressing only one aspect of climate change or attempting to address climate change through only one discipline is unproductive. Relying on a single climate change expert whose expertise in fact lies only in domestic environmental concerns, for example, without knowledge of international ramifications is doomed to failure.

To date, delegation of responsibility through the interagency process, where it exists, has all too often been characterized by overlap, not clarity, and by metrics that focus on task assignment, not task completion. This stems from a failure to delineate distinct roles for individual departments in the myopic push for interagency responses. This shortcoming was particularly evident as the United States felt its way through the initial years after the 9/11 terrorist attacks, leading to confusion and duplication of effort instead of effective integration. Such overlap exists, notably, between the departments of State and Defense when it comes to matters of public diplomacy, humanitarian aid, reconstruction, and political reconciliation in regions where the U.S. military is active. The QDDR should address this deficiency head-on, recognizing that overlapping authorities bear the prospect of diluting accountability.

But as new and improved interagency teams are stood up to address these 21st-century challenges, it is essential to institute workable accountability mechanisms. This entails three steps.

•First, define each problem and a clear national security objective of the spending program.
•Second, assign specific responsibility for the program and empower the appropriate office with resources and decision-making authority to get results.
•Third, measure the results and hold those responsible accountable for results that clearly advance or protect the U.S. national interest.

“Business as usual” for the State Department will not justify the massive expenditure of taxpayer money called for in Obama’s new budget. The department must adopt sound management principles commonly acknowledged by both the private and public sectors.

However, there is only so much that the State Department — or any department acting individually — can accomplish on its own. The very nature of the interagency process is such that reform is most likely to succeed when undertaken as a simultaneous, coordinated exercise among the various agencies. Making the interagency process work requires reforming the bureaucratic culture across agency lines, a task perhaps more important and more challenging than wholesale structural changes in the foreign-policy and national security architecture created by the National Security Act of 1947.

The QDDR is a first step in this important task, and other agencies would do well to follow suit. By developing its own version of the QDR, each player in the interagency process will be taking the first step toward successfully balancing collaboration, accountability, and clarity of mission.