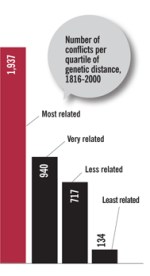 Anyone with a brother or sister can attest that you fight more with a sibling than with a cousin. Turns out the rule might hold true for states as well. According to a recent study, countries are far more likely to go to war with other countries whose populations are genetically similar to their own. Data from 1816 to 2000 show that the likelihood of conflict greatly increases with greater genetic likeness. Even when the researchers accounted for physical proximity by removing countries that share a border or were less than 620 miles (1,000 km) apart, the results were largely the same.

So why do we fight those who are most like us? “Countries are likely to have interacted more with other countries that are genetically similar, and therefore will have more issues over which they disagree,” UCLA economist Romain Wacziarg says. “Ethiopia is never going to go to war with Chile, not just because they’re so far apart, but because they have nothing to disagree about.” In other words, there’s just no unhappiness like an unhappy family.