How High Will It Go?

How the price of oil might superspike once again.

Just months after 2008’s expensive summer at the pump, oil prices plummeted — hitting a low of $32.40 per barrel in December 2008. Consumers and industrial users, hit hard by the financial crisis, scaled back on all types of petroleum products. Months of concern over tight supplies were washed away by a glut of cheap oil.

Yet as signs of recovery have begun to appear, volatile oil prices have started to more or less tick up again, prompting many to wonder what might happen once economic recovery truly begins. Could the world see another oil spike? The likely answer: yes.

In the first half of this decade, oil prices per day tended to rise when global spare capacity — the difference between supply and demand — fell to 3 million barrels per day or lower. This is not the case today; projected levels for summer 2009 were at their highest since the 1980s, more than twice the 3 million mark. Recent price hikes can likely be attributed to OPEC, the cartel of oil-producing countries that has imposed strict production quotas and taken spare capacity offline. Traders, who see scarce oil on the horizon once again, could also be pushing up prices in ominous anticipation.

The traders might have the right idea. If oil demand grows as quickly as expected when the world economy recovers, OPEC’s spare capacity could be gone within five years. And since the world relies increasingly on unconventional sources of oil (think tar sands), it will take time and money to bring more supply online. Until then, the world will be left with only demand-side measures — such as boosting energy efficiency and cutting back on use — to control prices. These, too, will require time, money, and changes in behavior. Meanwhile, prices will rise to clear the market.

All the ingredients are in place for another spike, perhaps as early as 2012, depending on the timing of the economic recovery. Prices could fly up as they did in late 2007 through mid-2008, when they reached nearly $150 per barrel. 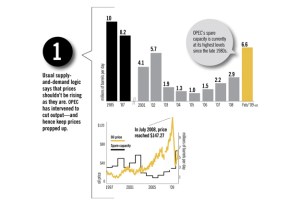 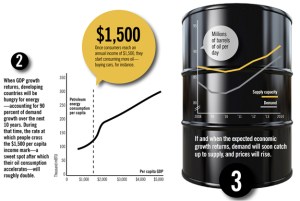 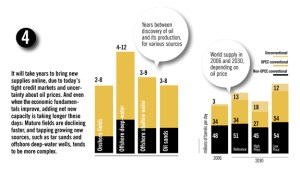 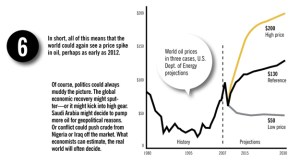