The Top 10 Craziest Things Ever Said During a U.N. Speech

The annual United Nations General Assembly can seem like a stodgy affair. Here are a few of the gathering's more indecorous moments.

From the impassioned to the provocative to the truly bizarre, here are the 10 most unforgettable remarks to come out of General Assembly speeches in the past seventy years.

An Indian Diplomat Filibusters Himself to (Near) Death

From the impassioned to the provocative to the truly bizarre, here are the 10 most unforgettable remarks to come out of General Assembly speeches in the past seventy years.

An Indian Diplomat Filibusters Himself to (Near) Death

Quote: “The Security Council regards this as a dispute. It is not a dispute for territory. There is only one problem before you… that problem is the problem of aggression.”

Impact: With this epic filibuster during a debate on Kashmir, Indian U.N. envoy Krishna Menon holds the record for the longest speech in the history of the U.N. Security Council. In total, it lasted over eight hours. Menon actually collapsed from exhaustion partway through and had to be hospitalized. He returned later and continued for another hour while a doctor monitored his blood pressure. 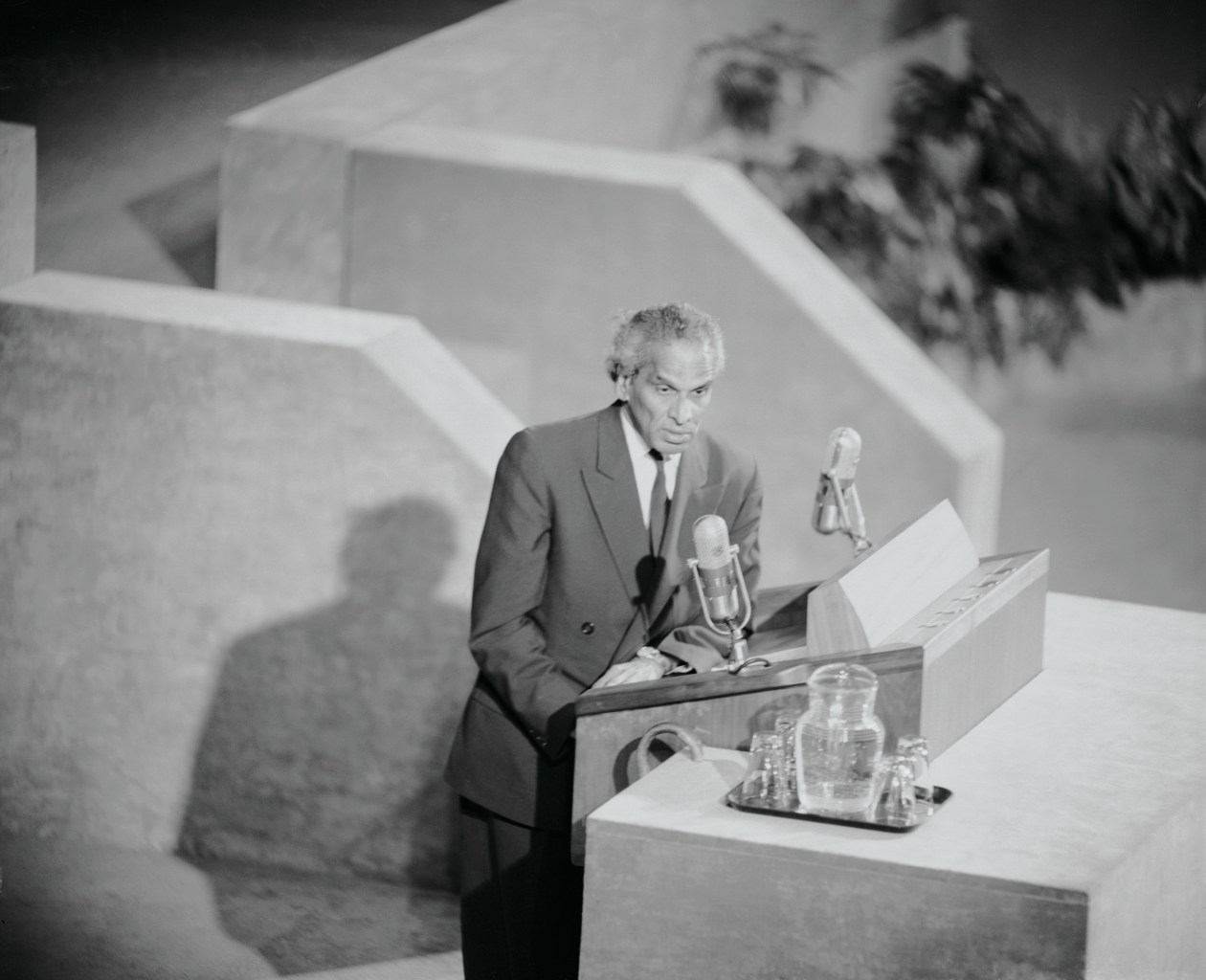 Quote: ”Were Kennedy not a millionaire, illiterate, and ignorant, then he would obviously understand that you cannot revolt against the peasants.”

Impact: He’s not quite in Menon’s league, but Cuban President Fidel Castro’s debut speech at the U.N. clocked in at four and a half hours, the longest ever in the General Assembly. Castro’s first visit to the United States in 1959 had been a bit friendlier, but by 1960 he was firmly in the Soviet camp and used his speech to blast U.S. imperialism and insult John F. Kennedy and Richard Nixon, the U.S. presidential candidates at the time. Castro provided another bizarre memory from that year’s assembly by keeping live chickens in his hotel room. 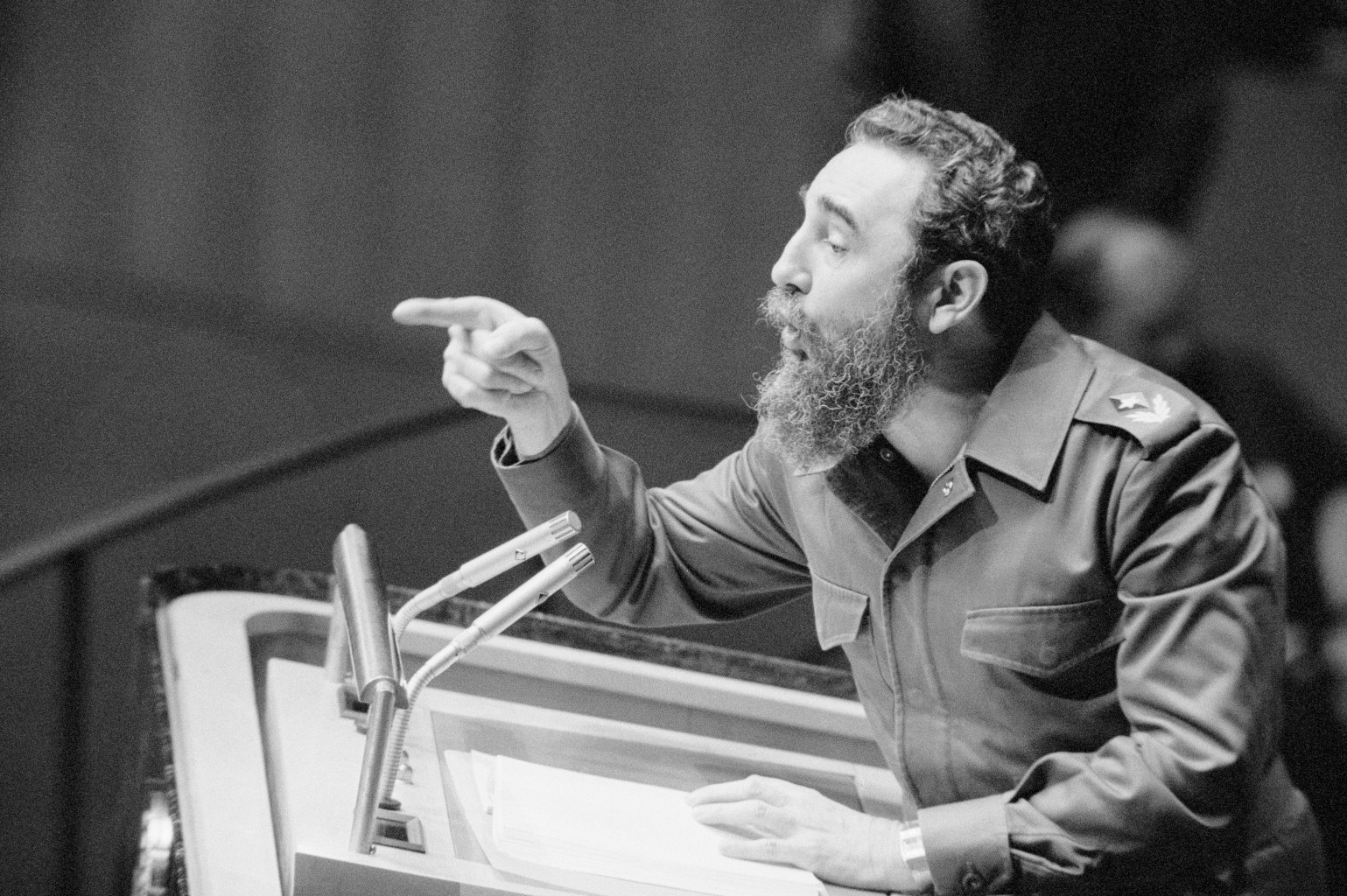 Krushchev Puts His Foot Down

Impact: Soviet Premier Nikita Krushchev provided one of the Cold War’s most iconic moments when, in an attempt to silence a Filipino delegate who was railing against Soviet imperialism, he issued the above epithet, removed his shoe, and began banging it on the table. The gesture has become a classic example of overheated rhetoric, but it shouldn’t have been all that surprising coming from the man who famously warned, “We will bury you.” 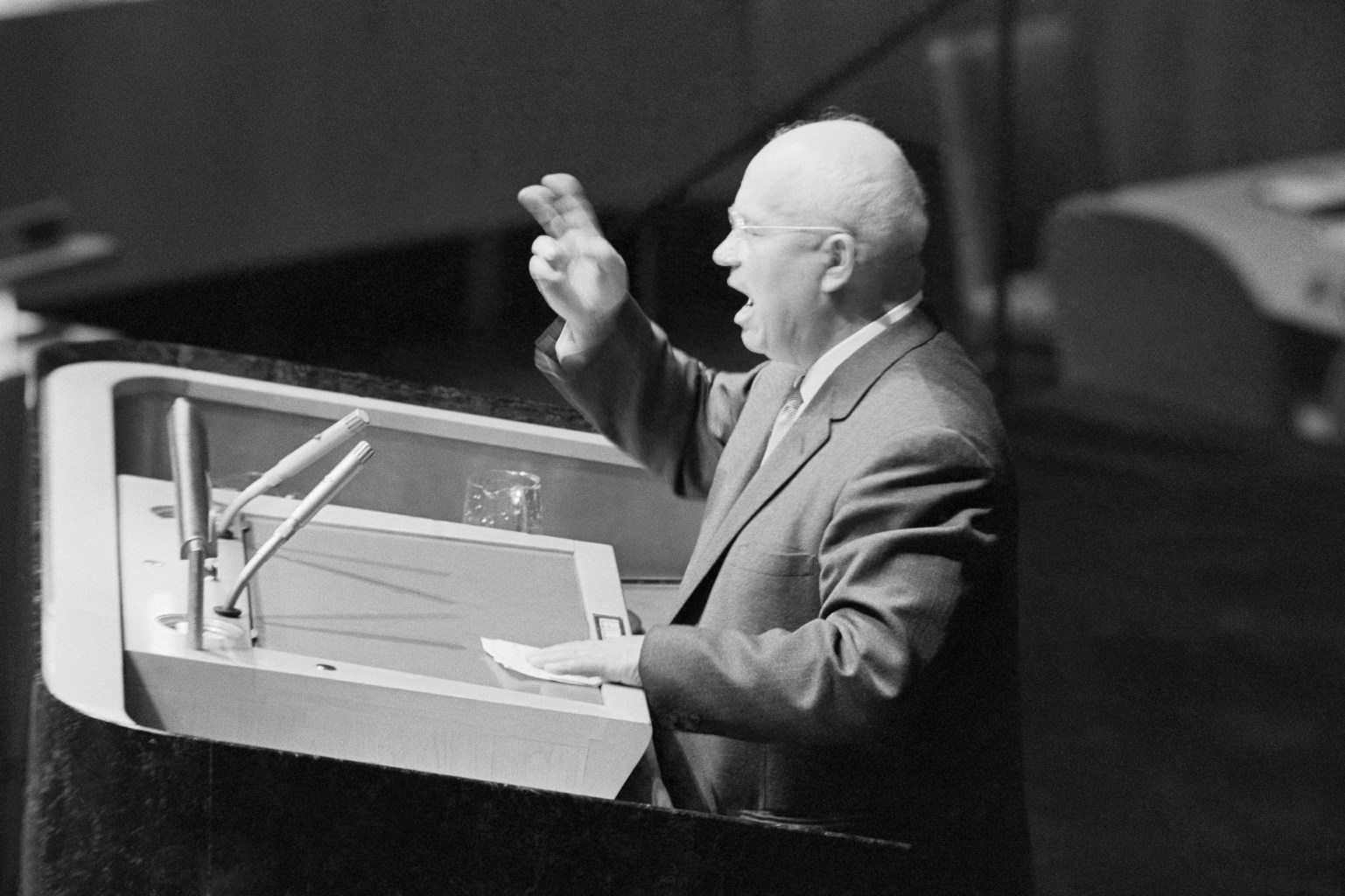 Quote: “It so happens that I have here today a concrete example of Soviet espionage so that you can see for yourself.”

Impact: Colin Powell famously used a vial of “anthrax” while trying in vain to win Security Council support for military action in Iraq, but there are times when props have been used a bit more effectively. During a debate over the shooting down of an American U-2 spy plane over Soviet territory, U.S. Ambassador Henry Cabot Lodge decided to go on the offensive. He took out a wooden seal that had been presented to the U.S. embassy in Moscow by the Soviet-American Friendship Society and then proceeded to extract a tiny microphone out of the eagle’s beak with a pair of tweezers. The Soviet resolution condemning the U.S. spy flights was defeated. 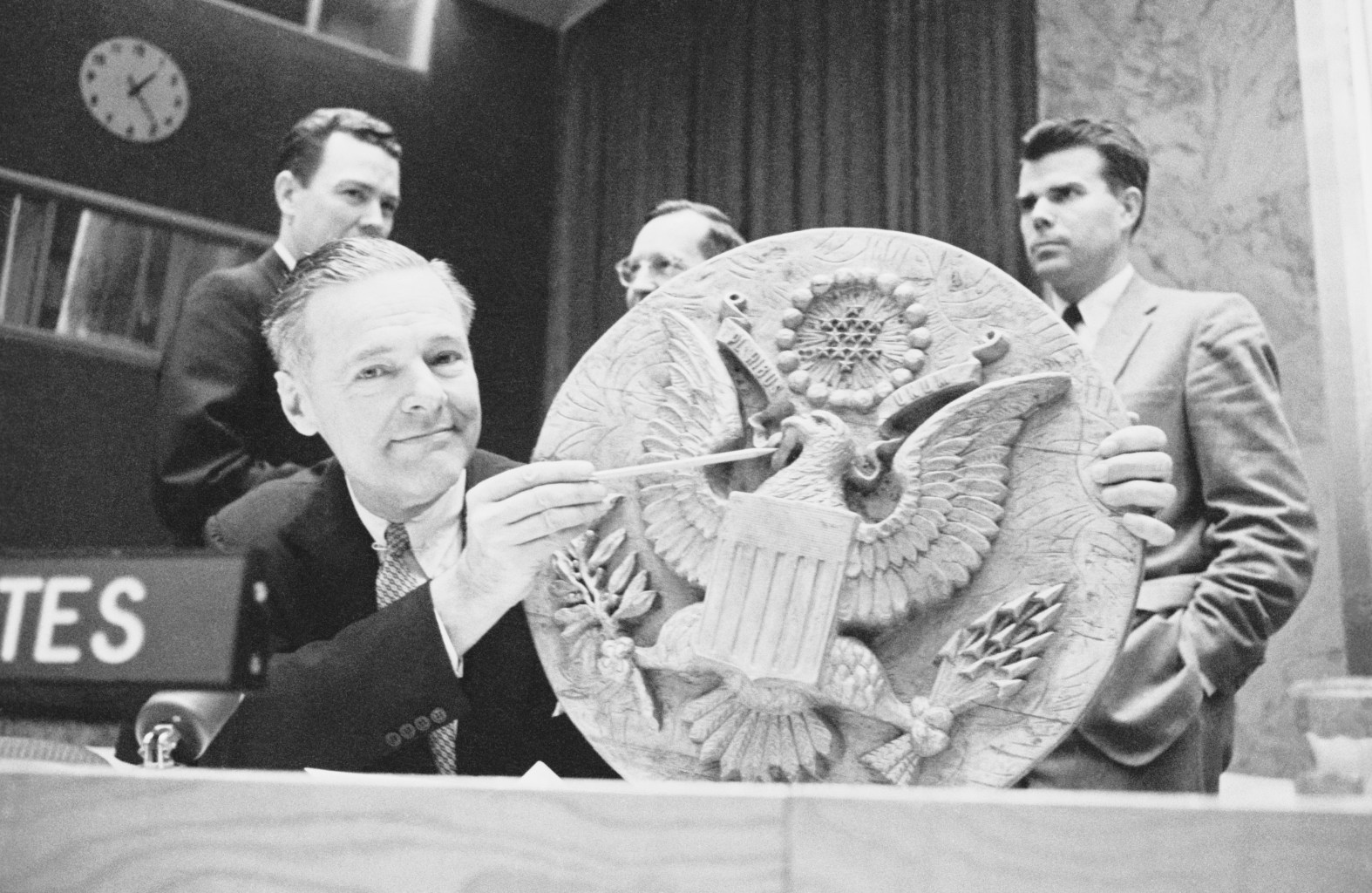 Quote: “An old world order is crumbling before our eyes, as imperialism, colonialism, neocolonialism, and racism, whose chief form is Zionism, ineluctably perish.”

Impact: The Palestine Liberation Organization Chairman was invited to address the General Assembly for the first time at the request of the non-aligned movement, a coalition of developing countries that has been historically critical of Israel in the U.N., Palestinian leader Yasser Arafat took the stage wearing fatigues and delivered a blistering attack on Zionism. One year later, the notorious “Zionism equals racism” was passed and Israel’s relations with the U.N. have been, at best, uneasy ever since. 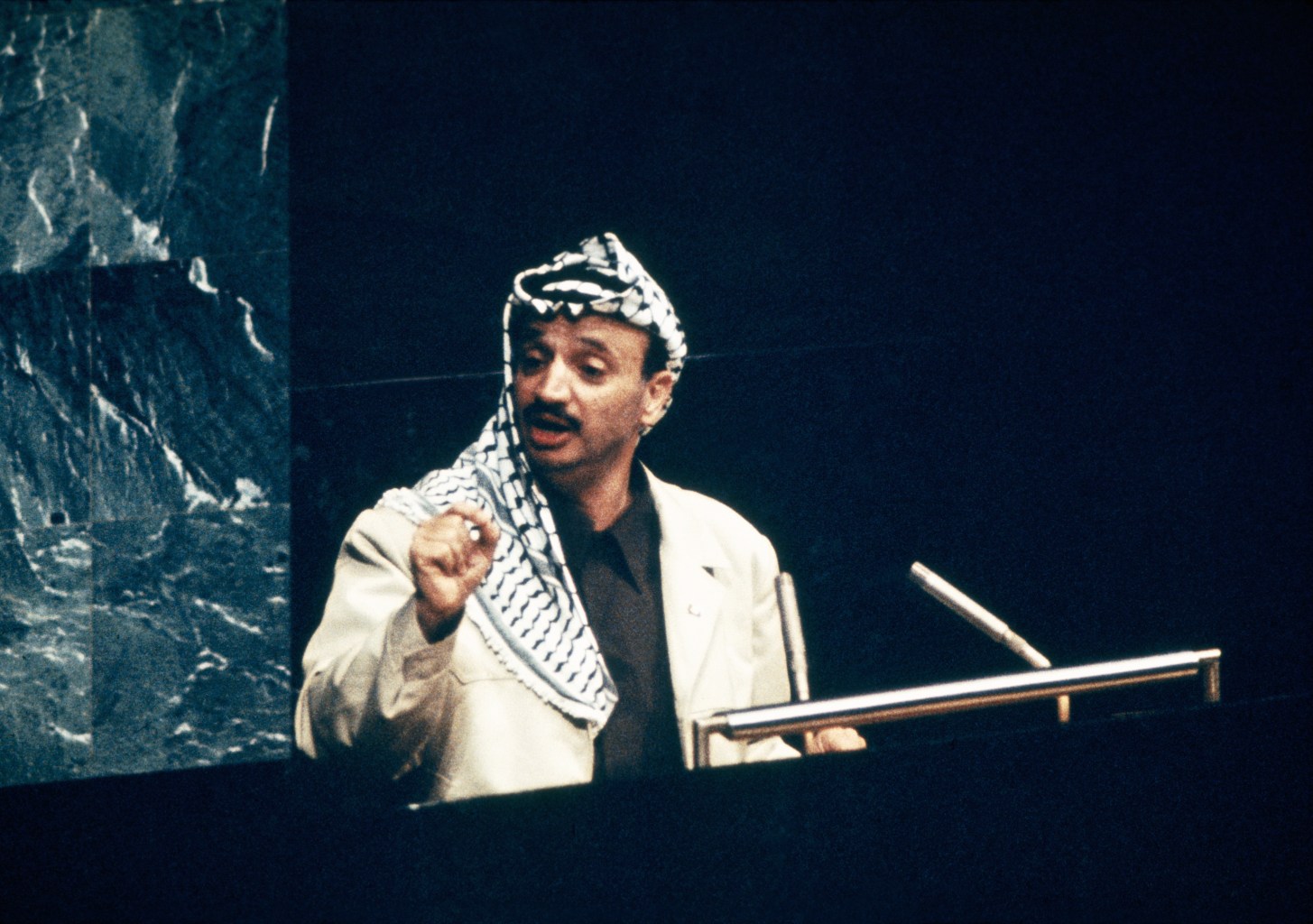 Quote: “Before consulting the hotheads who present various military options such as a military invasion: remember, President Reagan, Rambo only exists in the movies.”

Impact: Nicaraguan President Daniel Ortega used the platform of the U.N. to assail U.S policy in Central America, particularly the financing of the Contra rebels and supporting the Somoza dictatorship, which Ortega said “bled the Nicaraguan people dry.” The angry speech prompted a walkout from the U.S. delegation. “The people of Nicaragua may have to sit and listen to him, but I don’t,” said then U.S. Ambassador Vernon Walters. 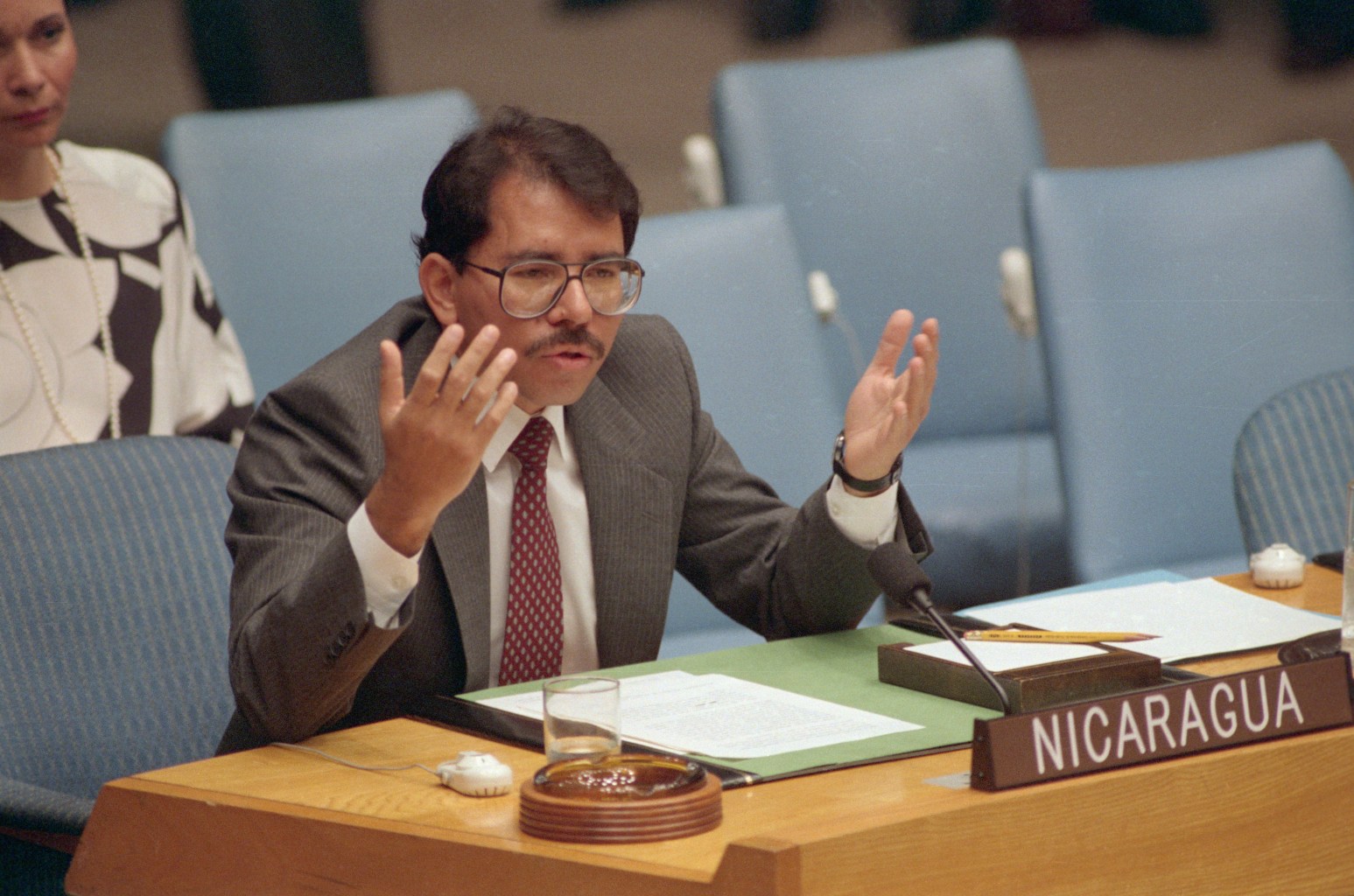 Chavez Sniffs out a Sinner

Quote: “The devil came here yesterday, and it smells of sulfur still.”

Impact: Venezuela’s theatrical president, Hugo Chavez, has always loved the spotlight that the General Assembly provides and it was never more in evidence than when, with a flourish, he compared U.S. president, George W. Bush, to Satan. Chavez also began his regular habit of using his speeches to plug books by prominent leftists authors, when he held up a book by U.S. professor Noam Chomsky. Chavez referred to this famous moment in his speech this year, saying that it “no longer smells like sulfur” now that Barack Obama is president. 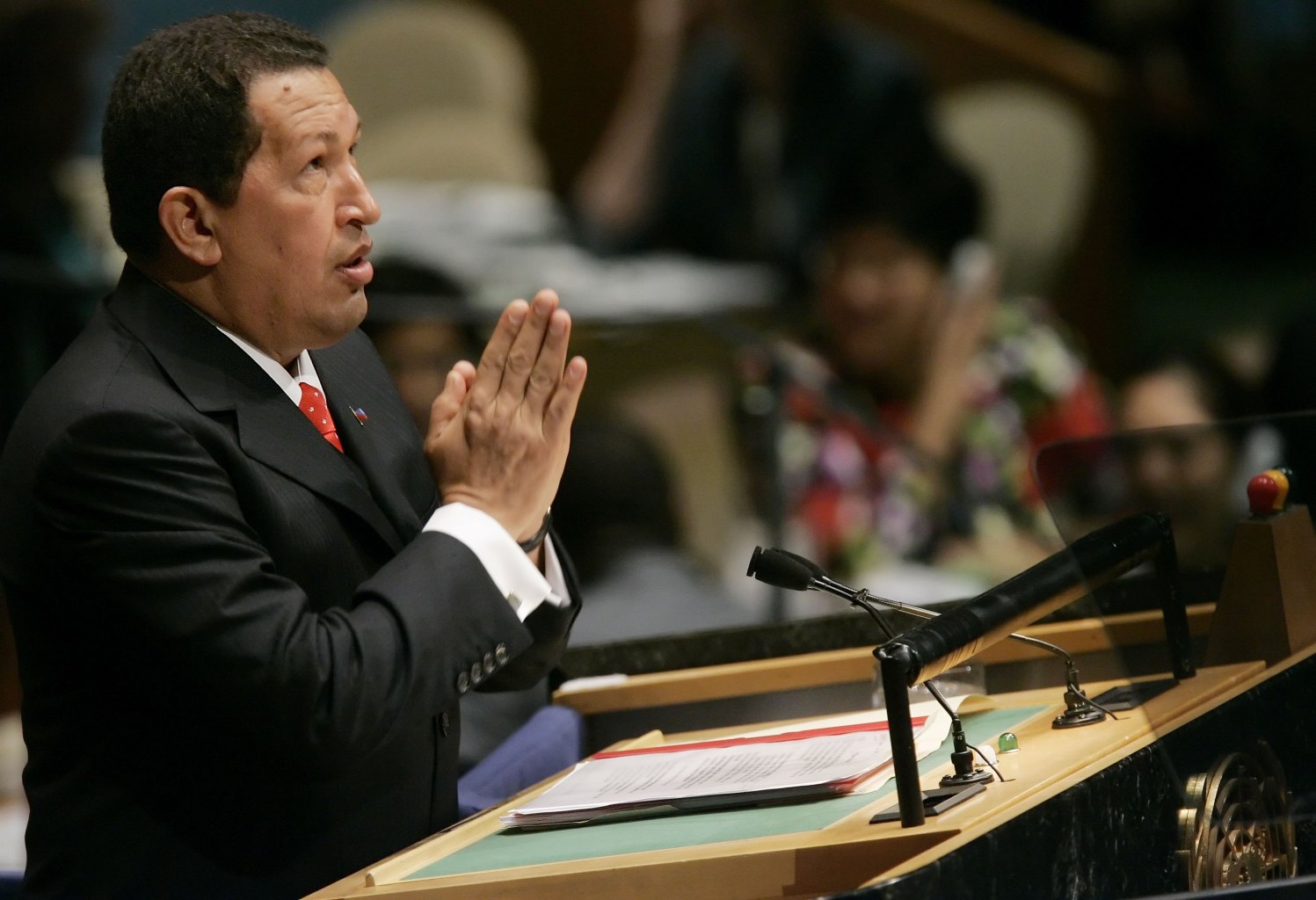 Quote: “The picture that volunteer organizations try to give in order to solicit more assistance and more aid, have given a negative result.”

Impact: At the 2006 speech, Sudanese President Omar al-Bashir claimed that the ongoing slaughter in Darfur, which then President George W. Bush had recently referred to as “genocide,” was in fact a scheme cooked up by Western aid organizations to solicit funding. On the sidelines of the meeting, Bashir went further, blaming Israel and Zionist organizations for spreading lies in order to weaken the Sudanese government. Iranian President Mahmoud Ahmadinejad has made this claim as well. 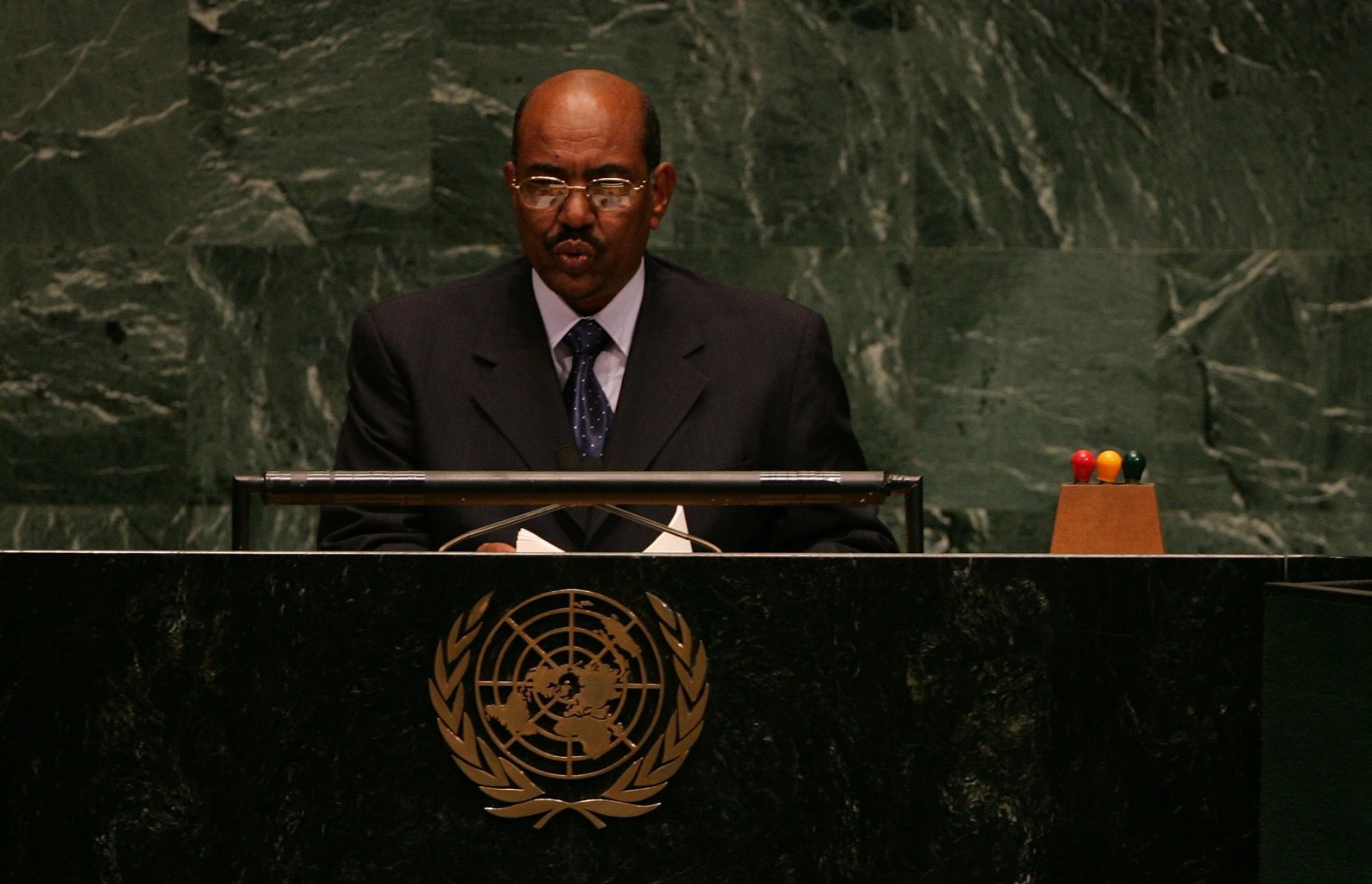 Quote: “The dignity, integrity and rights of the American and European people are being played with by a small but deceitful number of people called Zionists. Although they are a minuscule minority, they have been dominating an important portion of the financial and monetary centers as well as the political decision-making centers of some European countries and the U.S. in a deceitful, complex and furtive manner.”

Impact: Iranian President Mahmoud Ahmadinejad has regularly used the UN as a platform to rail against Western powers, particularly his arch-enemy Israel. In his 2008 speech he accused “the Zionist entity” of an array of crimes including causing the South Ossetia war. Another notable feature of Ahmadinejad’s speech is the heavy use of religious rhetoric and his use of Shiite religious teachings. 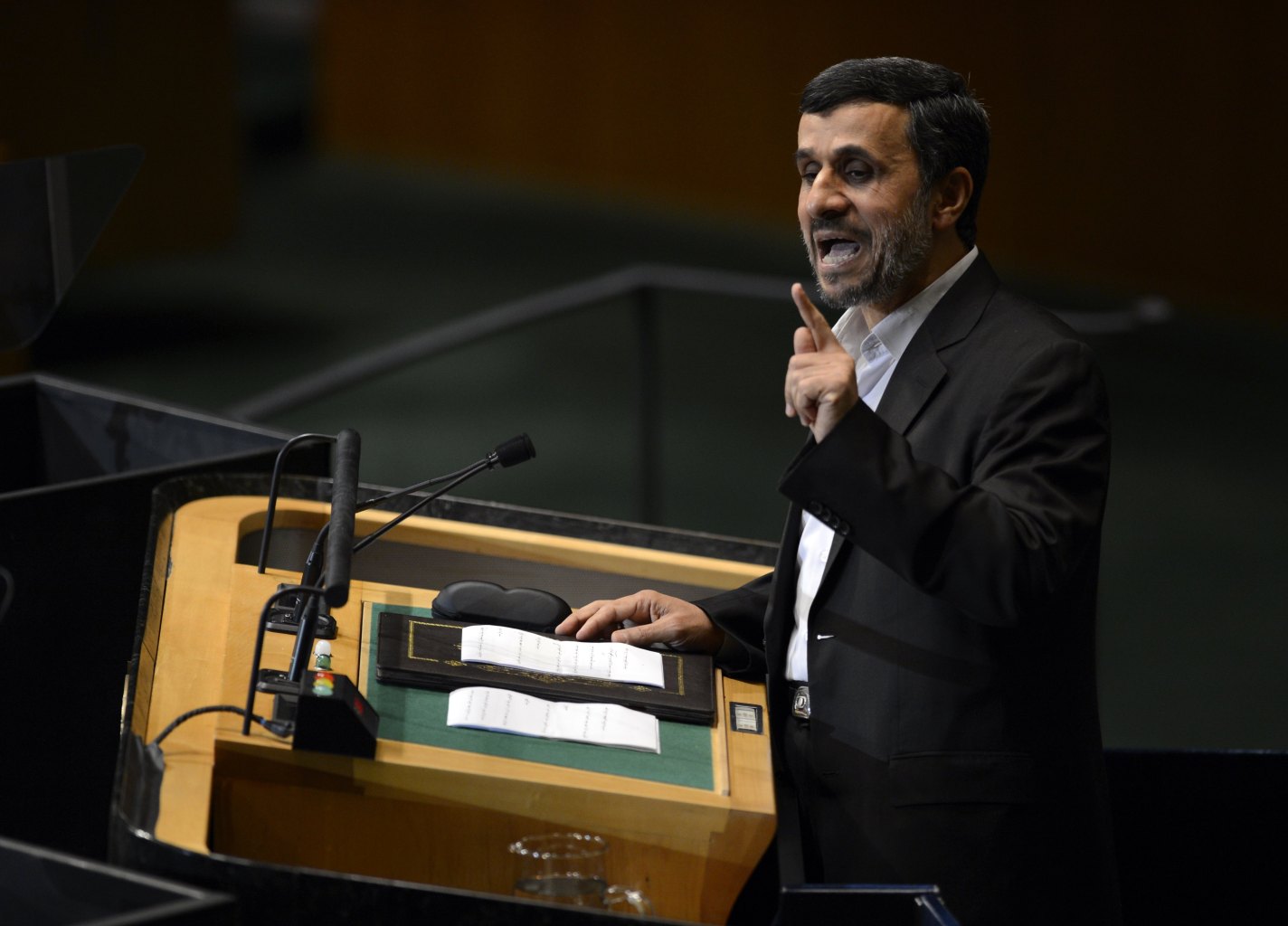 What is Qaddafi Doing?

Quote: “It should not be called a security council, it should be called a terror council.”

Impact: After 40 years in power, Libyan Leader Muammar al-Qaddafi spoke to the United Nations for the first time at this year’s general assembly and certainly made up for lost time. In his 100 minute speech, Qaddafi listed half a century’s worth of grievances and conspiracy theories including accusing the Untied States of developing swine flu and questioning the official record of the Kennedy assassination. Most of Qaddafi’s wrath was reserved for the U.N. Security Council, which he likened to al Qaeda. Qaddafi’s accommodations provided another sideshow at this year’s assembly, as the Libyan leader was rebuffed in his attempts to set up a Bedouin tent in several New York-area locations before finally making up camp in Donald Trump’s backyard. 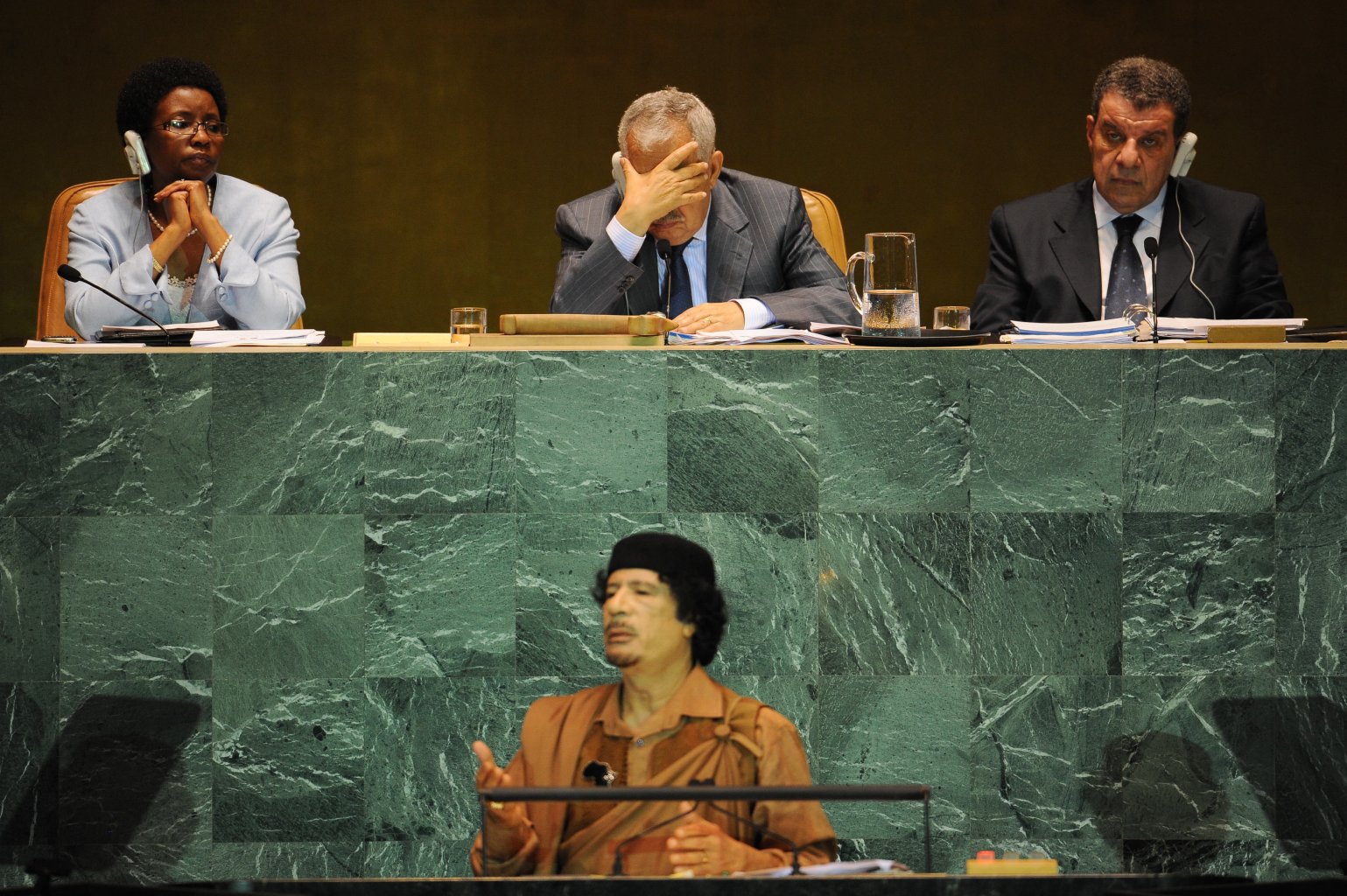 As China Loosens Zero-COVID, What's Next?

With Biden continuing on Trump’s protectionist path, the EU is embracing the same.