Are you a globalization junkie? Test your knowledge of global trends, economics, and politics with 8 questions about how the world works. 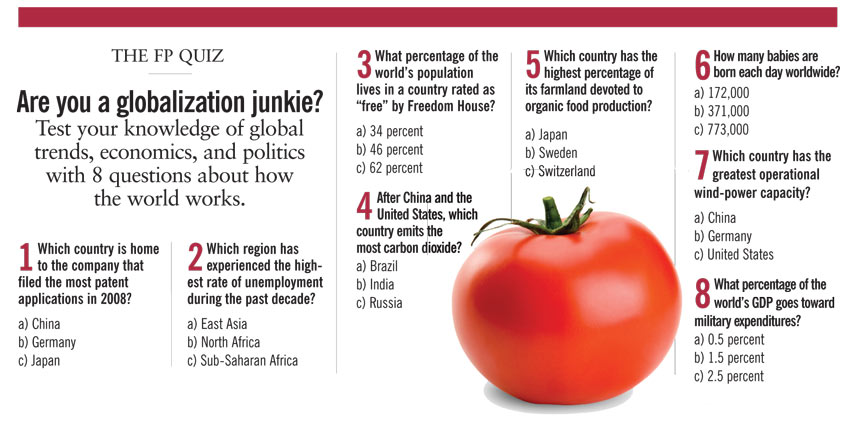 1) A, China. For the first time, a Chinese company filed the most international patents. Huawei, a telecommunications equipment company, edged out Japan-based Panasonic in 2008 for the No. 1 spot, filing 1,737 patents, according to the World Intellectual Property Organization. In 2008, some 164,000 international patents were filed, a 2.4 percent increase over 2007. But that’s actually a slowdown — the number of patents filed annually grew on average 9.3 percent during the previous three years. The global economic downturn has forced companies to curtail research spending.

3) B, 46 percent. In 2008, nearly half the world’s people lived in a country rated “free” by Freedom House, which has rated countries on political rights and civil liberties for more than 30 years. The number of countries classified as free — and the number of people living in free countries — has declined for the past three years. Freedom is deteriorating in non-Baltic states of the former Soviet Union, and Afghanistan’s rating dropped from “partly free” to “not free” in 2008.

4) C, Russia. By 2007, China had overtaken the United States to become the world’s largest emitter of carbon dioxide. Russia now holds the No. 3 spot, but rapidly developing No. 4 India is set to surpass it in the near future. The top emitter on a per capita basis is tiny Qatar, whose economy is built on exporting hydrocarbons to the world.

5) C, Switzerland. To meet soaring demand for organic food, the share of farmland devoted to growing it has increased in many developed countries. Today, just over 10 percent of Switzerland’s farmland is used to cultivate organic food, according to the OECD. The OECD countries at the bottom of the list are the United States, South Korea, Iceland, and Turkey, all with a fourth of a percent or less of their farmland used for organic foods.

7) C, United States. In 2008, the United States blew past Germany to the No. 1 spot when it increased its wind-power capacity to 25 gigawatts (GW), according to the Global Wind Energy Council. Last year, worldwide capacity grew 29 percent, the largest annual increase in six years. After No. 2-ranked Germany, which has 24 GW of capacity, comes Spain, where Don Quixote famously tilted at windmills, with about 17 GW.

8) C, 2.5 percent. In 2007, $1.34 trillion, or $202 per person, was devoted to military expenditures, according to the Stockholm International Peace Research Institute. In real terms, that amounts to a 45 percent increase since 1998. Yet, as a percentage of the world’s GDP, military expenditures have remained relatively constant, at about 2.5 percent, for the past decade.