Officials in Islamabad are notorious spinmeisters, but military spokesman Maj. Gen. Athar Abbas is fast becoming a prevaricator without peer.

As American tanks rumbled in to Baghdad on April 7, 2003, Iraqi InformationMinister Mohammed Saeed al-Sahaf, who became affectionately known as BaghdadBob, tried mightily to convince Western journalists to ignore the facts infront of their eyes. “I triple guarantee you, there are no American soldiers in Baghdad,” he told reporters as American troops gathered a few hundred yardsaway. Later, he stated that American soldiers were “committing suicide by thehundreds on the gates of Baghdad,” mere hours before coalition forces securedthe city.

Today,Baghdad Bob might have found a successor in the form of Maj. Gen. Athar Abbas,the director general of Pakistan’s Inter-Services Public Relations, which handles media relations for the Pakistani armed forces. In a recent Washington Post column, David Ignatius celebrated Pakistan’s new determination in confronting the Taliban, quoting Abbas saying that the ongoing offensive in South Waziristan brings an end to the Pakistani government’s thinking that “somehow we’ll be able to manage them, co-opt them, bring them on board.”

Statementslike that are music to American policymakers’ ears. But somehow, it seems like we’ve heard all of this from General Abbas before. In less than two years, the general has provided the media with a fairly impressive list of promises, assertions, and projections — none of which have more than a tenuous basis in reality. Here are a few of his greatest hits. But don’t worry: We’re sure that, this time, he means every word he says.

Sponsorship of the Taliban

Claim: In the recent Frontline documentary aired on Oct. 13, “Obama’s War,” a perplexed correspondent tried to get a straight answer from Major General Abbas.  Is it true, he asked, that the Pakistani government knows where Taliban leaders such as Mullah Omar and Siraj Haqqaniare located? But Abbas would not budge: “There is no truth in Mullah Omar and Siraj Haqqani remaining in Pakistan side of the border. I refute that.  No one has shown any intelligence to the Pakistanis.”

Taliban groups such as these, Abbas said, “operate from Afghanistan.  If somebody claims that everything is happening from this side of the border, I am sorry, this is misplaced, and we refute it.”

Reality: In 2008, the chairman of the U.S. Joint Chiefs of Staff, Adm. Michael Mullen traveled to Islamabad topresent the Pakistani government with evidence that elements of Pakistan’s Directorate of Inter-Services Intelligence (ISI) were supporting the Taliban. Mullen reportedly provided the Pakistani government with intercepted communications between the ISI and the Taliban to prove his point. “We spoke to, clearly, the ISI’s relationship with various militant groups that they’ve had for some time,” said Mullen in the same Frontline documentary. U.S. officials, from Barack Obama on down, have continued to emphasize Pakistan’s role as an incubator of terrorist activities. Thepresident stated this past March: “Multiple intelligence estimates have warned that Al Qaida is actively planning attacks on the United States homeland from its safe haven in Pakistan.” 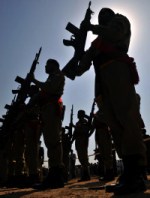 Claim: On May 17, 2008, Abbas accompanied journalists to Waziristan to speak of the military’s recent offensive in the region. He attempted to reassure reporters about a recent relocation of Pakistani Army troops: “The Army will still have a dominating presence [in Waziristan]. …Until we are fully sure that the tribal elders and ‘jirga’ (tribal council) are fully in place, we will stay here.”

Reality: On May 23, Taliban commander Qari Hussain — whom the Pakistani military took credit for killing during another offensive in Waziristan in January — held a press conference mocking reports of his death. “I am alive, don’t you see me?” he said. Baitullah Mehsud, then the most influential Taliban leader in Waziristan, also addressed a news conference at a government school building to announce that the Taliban would continue its war against NATO forces in Afghanistan. For the Pakistani military, this all amounted to something considerably less than a “dominating presence” in Waziristan. In any case, the military presence there soon waned, precipitating the recent offensive into the region.

Claim: Abbas has repeatedly criticized the U.S. drone strikes in Pakistan, and emphasized that the Pakistani military had no need for American help in its recent offensive. For that reason, the drone strike in the area of Bajaur on Oct. 24 was particularly inconvenient. Abbas, however, was unfazed: “Our information suggests that explosive material being loaded ata vehicle blew up,” he told journalists.

Reality: The “vehicle”detonated near a bunker where Maulana Faqir Muhammad, deputy chief of Hakimullah Mehsud’s Tehrik-e-Taliban, happened to be holding a secret meeting. That’s either the most fortuitous location for an explosives accident in history, or a strike from a Predator drone. The International News and the Daily Times, both Pakistani newspapers, didn’t fall for Abbas’s spin — they reported the explosion as a drone strike.

Claim: On Feb. 17, Abbas was handed a bona fide public relations disaster. The Times of London reported that the United States was using Pakistan’s Shamsi airfield, which lies about 200 miles away from Mullah Omar’s stronghold of Quetta, to launch Predator drone strikes. After spending the past year issuing government condemnations of U.S. drone strikes, Abbas was faced with the inconvenient fact that thePakistani state was quietly complicit in the launching of these attacks. But, like a good soldier, he pressed bravely on. As the Times of London reported: “Major General Athar Abbas, the chief military spokesman, confirmed that US forces were using Shamsi [airfield]. ‘The airfield is being used only for logistics,’ he said, without elaborating.”

Reality: Abbas’s denial would have been more believable if the Google Earth images accompanying the Times‘s article did not clearly show Predator drones on the ground at Shamsi airbase. The U.S. government also evidently did not believe that Abbas’s explanation would pass muster.  Two days later, on Feb. 19, U.S. officials would admit publicly to operating drones from Shamsi, and that the Pakistani government had been providing them with the locations of potential targets inthe tribal areas.

Claim: After a year of fighting in thecontested Swat Valley, the New York Times profiled the “terrified” residents caught between the Taliban and the Pakistani army on Jan.24. The article reported that Taliban fighters roam around the region freely,while the military hunkers down in its camps. Abbas, however, took issue withthe accusation that the military lacks the will to fight, calling it “very unfair and unjustified.” He also disputed that Mingora, the largest town in Swat, had fallen to the militants. “Just because they come out at night and throw down four or five bodies in the square does not mean that militants control anything,” he argued.

Reality:  On Feb. 16, the Pakistani government would sign a treaty in the Swat Valley that allowed for the imposition of sharia law in the region, in exchange for a “permanent cease-fire” with the Taliban. It turns out that the Taliban’s ability to “throw down four or five bodies in the square” did, in fact, say something about their ability to control the area – and at the height of their power the militants were able to assert their authority within 60 miles of Islamabad. The Pakistani government would only regain control of the Swat Valley after another offensive, begun in May 2009.

Give Up on Proxy Wars in the Middle East