The End of the World

While the apocalypse is pretty unlikely to come in 2012, it does have to happen sooner or later. Here are five possible scenarios for the end of humanity.

How it could happen: Objects from space impact Earth all the time, generally burning up in the atmosphere. Occasionally, a large object makes it through, resulting in a massive impact. The most recent major impact was the 1908 Tunguska event that flattened a 2,000-square-mile area of Siberian forest with an explosion about 1,000 times more powerful than the Hiroshima bomb. The object involved, which was likely only a few dozen meters in diameter, could have wiped out a major metropolitan area.

The real danger would come from an object more than a kilometer in diameter, which could kick up enough sediment to cause environmental damage and crop failures worldwide. A rock the size of the 15-kilometer object that is thought to have killed the dinosaurs 65 million years ago would probably wipe us out too.

How likely is it? Another large object is sure to hit the earth eventually, but almost certainly not during our lifetimes. An object big enough to kill off a substantial portion of the earth’s population only hits earth about twice every million years. None of the objects yet discovered by NASA’s Near Earth Objects program have a high probability of hitting the earth — though one known as 1950 DA will come extremely close in 2880. Given the relatively small effort devoted to identifying near-earth objects, there’s no guarantee that the earth would have much warning time before one hit. A previously unknown seven-meter asteroid passed just 14,000 kilometers from the earth’s surface on Nov. 6 and was noticed by NASA only 15 hours before what counts as an entirely too close encounter.

How it could happen: Under the worst-case scenario predicted by the International Panel on Climate Change, the global surface temperature of the Earth could increase by as much as 4-5 degrees Celsius by the end of this century. (Many scientists believe that estimate is conservative). Such a scenario would lead to as much as a half-meter rise in sea levels, flooding coastal regions including many of the world’s major cities.

Meanwhile, nearly one-third of the planet could become desert and more than half would experience drought. The salinization of much of the Earth’s groundwater supply will only make this worse. The IPCC found that at even a 3.5 degree increase would put 40-70 percent of the world’s species at risk of extinction, and the potential for new geopolitical conflicts over dwindling resources is mind-boggling.

How likely is it? A recent MIT study found that current carbon trends bear out the IPCC’s worst-case scenarios or even exceed them. Global carbon levels are currently at 380 parts per million compared to 280 before the Industrial Revolution. Most scientists conclude that catastrophic effects will begin to be felt once those levels pass 450. If the Earth reaches 800-1000 parts per million, as the worst-case scenarios predict, it’s really anybody’s guess. While recent research by the National Oceanographic and Aeronautics Administration suggests that many of the effects of climate change are already irreversible, the worst, potentially civilization-ending outcomes could be mitigated by a substantial reduction in carbon emissions.

How it could happen: There are currently more than 23,000 nuclear weapons in the world, of which 8,000 are currently operational and 2,000 are on high alert and ready to launch on short notice. While nuclear apocalypse has long been a popular subject for books and movies, the Dr. Strangelove scenario is actually fairly unlikely. Even in 1977, with nuclear arsenals near their Cold War height, the U.S. Defense Department of Defense predicted a maximum of 265 million casualties from a full-scale U.S.-Soviet nuclear war. Certainly, such a death toll would be enough to destroy both countries as superpowers, but not the end of life as we know it. With nuclear stockpiles substantially reduced since then, the casualties would likely be much lower today.

However, scientists in the 1980s developed models showing that the dust and smoke caused by a superpower nuclear war would cause temperature and precipitation shifts unprecedented in human history — a “nuclear winter.” A study by Cornell ecologist Mark Harwell in 1986 predicted that global agriculture would be wiped out completely for a year, leading to a famine that would wipe out most of humanity. A 2007 study by ecologists at Rutgers University found that current global nuclear stockpiles are still capable of producing this outcome.

How likely is it? The Bulletin of the Atomic Scientists created the famous “Doomsday Clock” in 1947 to convey how close humanity is to “catastrophic destruction.” The clock reached its high-point — 2 minutes to midnight — after the first hydrogen bomb tests in 1953. The BAS moved the clock back to 17 minutes after the end of the Cold War but it has been steadily ticking back toward midnight since then, with rogue states such as North Korea developing nuclear weapons and tensions increasing between nuclear-armed India and Pakistan and it currently stands at 5 minutes to midnight.

Despite this, the worst-case scenario of all-out nuclear war between two superpowers is far less likely than it once was. The nuclear winter theory also remains controversial, with some scientists saying the predicted effects have been exaggerated.

How it could happen: Throughout history, plagues have brought civilizations to their knees. The Black Death killed more off more than half of Europe’s population in the Middle Ages. In 1918, a flu pandemic killed an estimated 50 million people, nearly 3 percent of the world’s population, a far greater impact than the just-concluded World War I. Because of globalization, diseases today spread even faster – witness the rapid worldwide spread of H1N1 currently unfolding.

A global outbreak of a disease such as ebola virus — which has had a 90 percent fatality rate during its flare-ups in rural Africa — or a mutated drug-resistant form of the flu virus on a global scale could have a devastating, even civilization-ending impact.

How likely is it? Treatment of deadly diseases has improved since 1918, but so have the diseases. Modern industrial farming techniques have been blamed for the outbreak of diseases, such as swine flu, and as the world’s population grows and humans move into previously unoccupied areas, the risk of exposure to previously unknown pathogens increases.  More than 40 new viruses have emerged since the 1970s, including ebola and HIV. Biological weapons experimentation has added a new and just as troubling complication. 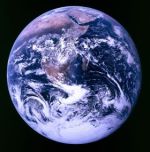 How it could happen: There are any number of theories for how human civilization — the world as we know it — might end. Some are natural: supervolcanoes erupting like the one in Yellowstone National Park that could severely alter the Earth’s climate or a gamma-ray burst from a star that would cause dangerous radiation in the Earth’s atmosphere. Others are man-made: overpopulation causing a food crisis or the accidental development of dangerous new technologies.

How likely is it? Sooner or later, the world will end. In about 5-8 billion years, according to astronomers’ estimates, our sun will burn out the last of its hydrogen into helium and will balloon up into a red giant hundreds of  times its current size, dragging the Earth to its inevitable doom. Even if the planet escapes destruction, it’s atmosphere and oceans will be boiled away. Human beings have only been around for a small fraction of that time — around 200,000 years — and one way or another, the chances of us being around for the real end of the world are pretty slim.