Have you heard of the French ship called the Mistral? Well, you’re about to. Several senior members of the U.S. Congress are becoming heavily involved in trying to thwart the possible sale of the Mistral from France to Russia. The Mistral is France’s state-of-the-art amphibious assault ship, and discussions of selling it to the Russian ... 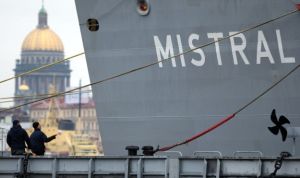 Have you heard of the French ship called the Mistral? Well, you’re about to. Several senior members of the U.S. Congress are becoming heavily involved in trying to thwart the possible sale of the Mistral from France to Russia.

The Mistral is France’s state-of-the-art amphibious assault ship, and discussions of selling it to the Russian Federation have been causing angst in European capitals for months. The sale would be the first significant arms transfer from a NATO country to Russia and what’s more, the Russians have already indicated that it could be used in future operations in countries in its near abroad, such as Georgia, which it invaded last year.

Russian Navy Commander Admiral Vladimir Vysotskiy said in September that “In the conflict in August last year [against Georgia], a ship like that would have allowed [Russia’s] Black Sea Fleet to accomplish its mission in 40 minutes, not 26 hours which is how long it took us [to land the troops ashore].”

This is just one of the concerns that prompted Congresswoman Ileana Ros-Lehtinen, R-FL, the top Republican on the House Foreign Affairs Committee, to introduce a bill late Thursday that would express the sense of Congress that “France and other member states of the North Atlantic Treaty Organization and the European Union should decline to sell major weapons systems or offensive military equipment to the Russian Federation.”

The resolution alleges that Russia remains in violation of the French-brokered ceasefire that followed the Georgia invasion. Also, Russia is expanding its military presence in a way that threatens Georgia, and has made a number of aggressive moves toward several countries in the region, according to the text. The sale of the Mistral to Russia “would enhance that country’s ability to potentially wage aggression against its neighbors,” the resolution states.

Ros-Lehtinen is calling on President Obama, as well as Defense Secretary Robert Gates and Secretary of State Hillary Clinton, to urge France not to sell major offensive weapons systems to Russia until Russia completely withdraws from Georgian territory and makes broad reforms in areas ranging from rule of law to human rights.

The bill has been referred to the House Foreign Affairs Committee for consideration, but that’s only the beginning of coming U.S. congressional involvement on the issue. Multiple Senate aides tell The Cable that several senators from both sides of the aisle are busily drafting a letter to the French Embassy calling on France to hold off on the sale. That letter is expected early next week.

There goes the neighborhood?

The 650-foot long Mistral is the second largest vessel in the French Navy and each one is capable of carrying up to 16 helicopters, tanks, land assault vehicles, and 900 troops.

In addition to Georgia, the Baltic states of Lithuania, Latvia, and Estonia are also concerned about the Russians buying such a ship, especially from their fellow NATO and EU member France. Serious discussions have been initiated within NATO by these states about the possible deal.

“I’ll say it quite bluntly –it has implications for NATO’s security, because of what we saw last year,” Marko Mikhelson, chairman of the European affairs committee in Estonia’s Parliament, told the New York Times.

Despite that, the French sailed a Mistral directly past these states to the port of St. Petersburg last month to show off the ship for the Russian government. And Russian Prime Minister Vladimir Putin refused to rule out using the ship against the Baltics on his recent trip to Paris.

“Whoever we buy it from, we will reserve the right to use it where and when we consider necessary,” he said.

The Baltic states have protection as part of NATO and the EU. Georgia? Not so much. A senior Georgian government official spoke with The Cable about that country’s concerns about the sale.

“We have experienced ourselves that Russia is capable of using military force against its neighbors,” the official said, pointing out that Georgia has less ability to build international support for their opposition to the deal.

A French Embassy spokesman told The Cable that the sale of a Mistral-class ship to Russia is still a project and no decision has been made by either the Russians or the French.

“There is a Russian request and we see no reason to refuse considering that request, which will be examined with all the necessary precautions as part of the military equipment export control regulatory procedures and will take time,” the spokesman said.

He pointed out France has used Mistral-class ships for humanitarian missions and to evacuate nationals from dangerous situations.

The French have also have made the argument that selling arms to Russia is needed for peace and stability in Europe. “It would be impossible to call for continental stability in partnership with Russia if we refuse to sell armaments to Russia. A refusal would amount to contradicting our own discourse,” French Prime Minister Francois Fillon reportedly said.

And while the French have said they would sell a scaled-down version of the Mistral without some weapons and advanced-control technologies, American defense experts warn that the sale could start a chain reaction of European states selling sensitive military technologies to Russia to shore up their struggling defense industries.

“Given the shrinking defense budgets of European countries and the pressure to keep domestic defense firms from going under by expanding exports, there is little question that less and less restraint would be shown by competing governments and companies on what could be sold to Moscow,” wrote Gary Schmitt, defense expert at the American Enterprise Institute in Washington.

Moreover, “there is the signal such a sale would send Moscow about just how unserious the West is in holding Russia’s feet to fire over its invasion of Georgia and the terms of the subsequent agreement,” he said.