No Heads Are Better Than Two

Russia's double-headed eagle is not just a national emblem. It's a symbol of the national schizophrenia.

As Russia teeters between democracy and autocracy, modernity and a return to its Stalinist past, the tentative liberalism represented by President Dmitry Medvedev and the repression represented by Prime Minister Vladimir Putin, one symbol describes the country’s split personality particularly well: the double-headed eagle, Russia’s emblem for much of the time since the 15th century.

Throughout ancient history, eagles — with one head — were a universal symbol of empire, from Persia, Turkey, and South India to Mesopotamia, Anatolia, and Rome. Napoleon adopted the noble bird as his coat of arms in the early 1800s. In modern times, the eagle has lived on, though it has shed some of its domineering symbolism. Countries such as the United States, Egypt, Iraq, Mexico, Poland, and Romania have adopted the eagle more as a sign of national greatness than of conquest.

Add a head, however, and the equation shifts. In Byzantium, the “Second Rome” of the first millennium, the two-headed eagle came to signify the empire’s doubly powerful domination over the world: One head looked over the West, the other ruled the East. Not to be outdone, the Holy Roman Empire starting in the 900s also insisted on two heads. After that empire dissolved in 1806, its successors in the German Confederation and Austria-Hungary held on to the double heads, at least until modernity hit and that second one began to look too 10th-century. Germany discarded its second eagle’s head in 1866, while Austria’s lasted until 1918.

The Russian czars, soon after Byzantium’s collapse in 1453, also adopted the double eagle as a symbol of their power. After dumping the czars centuries later, the Soviets sought to eliminate all trace of the imperial emblem, going to such lengths as painting red stars over the double-headed eagle on the side of official teacups. But President Boris Yeltsin brought it back after the Soviet collapse in 1991 to replace the hammer and sickle as the state symbol, explaining that the eagle’s three crowns no longer had imperialist overtones but referred to the executive, judicial, and legislative branches of the government. The double-headed eagle he chose evoked the seal of Peter the Great, the legendary reformer to whom Yeltsin liked to compare himself.

But no one stopped to argue that maybe what Russia really needed was only one eagle with a clear mission — not two heads, or three crowns. And now it’s just Russia and the Balkan states of Serbia, Albania, and Montenegro that still cling to the double eagle.

At first, Yeltsin’s move seemed to be about resurrecting a pre-Soviet relic. But over the last decade the eagle’s implicit message — Russia’s superiority over both Europe and Asia — has become more and more central to Russian identity. Today you’ll find the emblem everywhere: on Russia’s official coat of arms, on its police insignia, as the symbol for Kremlin announcements on television, in the Ministry of Internal Affairs logo, and so forth. Byzantium and its twin-headed icon are discussed on talk shows, their imperial grandeur cited as an example for Russia’s future glory. Russian Orthodox priests deliver sermons on the lessons Russia must learn from its Byzantine past.

Putin himself often invokes a mythic version of this history to explain why the country is so great. “‘All peoples are equal before God’ is at the foundation of Russian statehood,” he said upon assuming the presidency in 2000. “Unlike in the West, Russian Orthodox culture had always insisted upon the equality of all peoples. 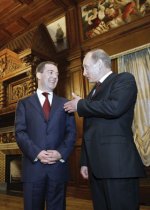 But the double-headed eagle that serves as a constant reminder of Russia’s glorious Byzantine roots isn’t just an ill-conceived imperial throwback; it’s a stand-in for the schizophrenia that describes every aspect of Russian life today. With Putin and Medvedev, for instance, we get the ultimate push-me-pull-you double-headed monster. Putin has accused the United States of bringing the world “to the abyss of one conflict after another,” making political compromise impossible. Yet, congratulating U.S. President Barack Obama on his Nobel Peace Prize, Medvedev hailed the “principles of equality, mutual respect to the benefit of global peace, and stability” shaping the U.S.-Russia relationship.

In Medvedev’s presidential state of the union address in November, he seemed to distance himself from his other head, saying that the government must admit fault for the hardships of the economic crisis and calling for a less blustering foreign policy. It will be a cold day in hell when Putin — who sat pouting in the front row throughout Medvedev’s speech — permits any of Medvedev’s recommendations to go through the Kremlin.

But it’s not just Russia’s leaders who aren’t rowing in the same direction. We Russians are divided about our history, especially our Stalinist past. Last year, the liberal newspaper Novaya Gazeta reproduced some of the recently declassified execution orders signed by Stalin; now his grandson Yevgeny Dzhugashvili has brought the journalists to court for lying about the memory of the great leader. In 2007 a textbook that defended Stalin’s rationalism in killing millions was published as a teaching guide in Russian schools; in 2009 Aleksandr Solzhenitsyn’s The Gulag Archipelago, an account of the inhumane horrors of Stalin’s rule, was assigned to those same schoolchildren. Double-headed schizophrenia in action: In first period kids learn Stalin was an “efficient manager” who was a good “guardian” of his people; in second period they find out he committed crimes against these very people. No wonder that 51 percent of Russians think that Stalin was a wise leader, and 56 percent think he accomplished more good than bad, according to a 2005 Levada Center poll.

So which eagle is it? Is Russia the innovative, modernizing giant of post-post-Cold War industry that Medvedev seems to think it can be, confronting its demons in a sane way and moving forward? Or is it Putin’s hidebound, bankrupt, and desperate punching bag of the West, the society preoccupied with reliving the glories of its past and whitewashing the evils?

There’s only one solution to this double-headed problem, and it’s one even Stalin could appreciate: Off with one head.

Lukashenko Sworn in as Belarus President as EU Mulls Sanctions

Turkish Aggression Pushed Italy and France to Join Forces in the Mediterranean. Now What?

As Decoupling Grows, the West Risks Losing Insight Into China