Port-au-Prince before the earthquake, as described by Haitian writers and visitors to the island nation.

Port-au-Prince bustled. The garden-filled capital city of 3 million was flocked with hills, covered in chalk-white buildings, home to palaces and slums. Tap Taps, the colorful shared taxis, ported citizens through the city, the onomatopoetic name referring to the custom of tapping coins on the side of the cab to stop it. Tourists walked through the Champ de Mars. Tiny fishing vessels filled the bay, cruise ships looming further out. For the first time in decades, Haiti was peaceful and growing, President Réné Préval well-liked internationally and at home, the economy expanding while nearly every other in the Caribbean contracted.

The day before yesterday, a high-magnitude earthquake leveled much of Port-au-Prince. Here is a remembrance of the city -- founded 260 years ago -- in the words of famed residents and visitors, including Langston Hughes, Edwidge Danticat, and former president Jean-Bertrand Aristide. 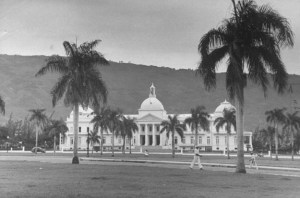 Port-au-Prince bustled. The garden-filled capital city of 3 million was flocked with hills, covered in chalk-white buildings, home to palaces and slums. Tap Taps, the colorful shared taxis, ported citizens through the city, the onomatopoetic name referring to the custom of tapping coins on the side of the cab to stop it. Tourists walked through the Champ de Mars. Tiny fishing vessels filled the bay, cruise ships looming further out. For the first time in decades, Haiti was peaceful and growing, President Réné Préval well-liked internationally and at home, the economy expanding while nearly every other in the Caribbean contracted.

The day before yesterday, a high-magnitude earthquake leveled much of Port-au-Prince. Here is a remembrance of the city — founded 260 years ago — in the words of famed residents and visitors, including Langston Hughes, Edwidge Danticat, and former president Jean-Bertrand Aristide. 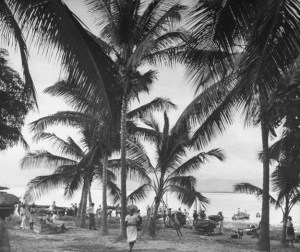 When one first approaches the capital of Haiti — Port au Prince — by sea it has a comely aspect in the daytime, with its new cathedral, with the twin cupolas, and its great mass of pink and white houses (interspersed with handsome trees) strewn over the foothills of the southern mountain range.

The city, with a population of 120,000, is at the head of a great gulf between the northern and southern arms of Haiti, which Nature had intended to be the imperial naval station of the whole world — a region of sheltered seas, healthy climate, and shores supplied with all that man could desire in the way of wood and water and fertile soil. 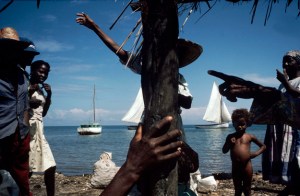 Langston Hughes, from Autobiography: I Wonder as I Wander, 1956

Haiti, land of blue sea and green hills, white fishing boats on the sea, and the hidden huts of peasants in the tall mountains. People strong, midnight black. Proud women whose arms bear burdens, whose backs are very straight. Children naked as nature. Nights full of stars, throbbing with Congo drums. At the capital lovely ladies ambergold, mulatto politicians, warehouses full of champagne, banks full of money. A surge of black peasants who live on the land, and the foam of the cultured elite in Port-au-Prince who live on the peasants.

Port-au-Prince, city of squalid huts, unattractive sheds and shops near the water front, but charming villas on the slopes that rise behind the port. A presidential palace gleaming white among palm trees with the green hills for a backdrop. A park where bands play at night. An enormous open-air market.

“Ba moi cinq cob,” children beg of tourists in the street. Cinq cob means a nickel. They speak a patois French. The upper classes, educated abroad, speak the language of Paris. But I met none of the upper-class Haitians. 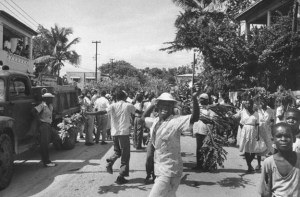 Jean-Baptiste Aristide, a former Roman-Catholic priest and president of Haiti, from In the Parish of the Poor, 1990

I live in Haiti.

The other day in the midst of Port-au-Prince, the great degraded capital city that is my home, I saw a car, an old battered car, a jalopy, falter and sputter and come to a slow halt. It was out of gas; this happens often in my destitute country, where everyone and everything is so poor that the donkeys and horses are starving and even the cars must try to get by on nothing. The man who was driving the car got out and looked at it, stuck there in the middle of traffic, helpless. Then I saw another face, the passenger. A woman. She looked out of the back window with tears in her eyes, and the driver looked around the street at the unemployed loungers who are always there, and said to them, “She is going to have a baby right here.” He told them that he had taken the woman from her home because the midwife was unable to help her. The pregnancy was difficult, and the woman needed to go to the hospital to have her baby. Now the tears were coming down the woman’s cheeks. “If we do not get to the hospital, she will die,” the man told the loungers. “Her baby will die, too.”

The loungers — hungry young men who had never had a job and who will never have a job if my country goes on as it has done for the last half century — looked at the car and heard the man’s voice and saw the woman’s tears. Their backs straightened, their cigarettes fell to the ground, their eyes cleared. They approached the car, eight of them, leaned over, and put their shoulders to the chore. The driver steered. The woman lay back. Down one long dusty road, a left turn, and down another, through the green and white gates of the State Hospital, and she had arrived. 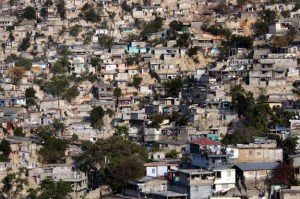 Oh! Port-au-Prince is a monster all right — you’ll never get to know the whole story. She’ll offer you her sumptuous gardens and extravagant villas. But for those of us tossed back into her seediest neighborhoods by misery, she has both the gentleness and the rage of a whore. A female city, Port-au-Prince sometimes cradles you with an extraordinary tenderness and sometimes spits in your face without your knowing why.

Tonight, as is often the case these days, the streets are deserted. Besides the streetwalkers, only some impenitent revelers dare to be out and about. The macadam resonates with the sound of heavy boots as the armed makout patrol the city. Some of them seem so feeble you have to wonder how they’re able to carry around those heavy machine guns. But of all of Duvalier’s henchmen they’re certainly the most dangerous, however, because they’ve betrayed us by spreading misery beyond measure and their shame has driven them insane. 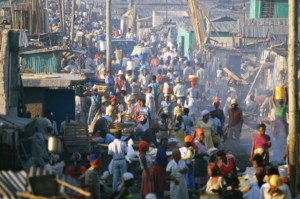 The sun crawled across our faces as the car sped into Port-au-Prince. I had never been to the city before. Colorful boutiques with neon signs lined the street. Vans covered with pictures of flowers and horses with wings scurried up and down and made sudden stops in the middle of the boulevards.

Tante Atie gasped each time we went by a large department store or a towering hotel. She shouted the names of places that she had visited in years past.

When they were teenagers, she and my mother would save their pennies all year long so they could come to the city on Christmas Eve. They would tell my grandmother that they were traveling with one of the old peddlers, but that was never their plan. They would take a tap tap van in the afternoon so as to arrive in Port-au-Prince just as the sun was setting, and the Christmas lights were beginning to glow.

They stood outside the stores in their Sunday dresses to listen to the sounds of the toy police cars and talking dolls chattering over the festive music. They went to the Mass at the Gothic cathedral, then spent the rest of the night sitting by the fountains and gazing at the Nativity scenes on the Champs-de-Mars. They bought ice cream cones and fireworks, while young tourists offered them cigarettes for the privilege of taking their pictures. They pretended to be students at one of the gentry’s universities and even went so far as describing the plush homes they lived in. The white tourists flirted with them and held their hands. They laughed at silly jokes, letting their voices rise and fall like city girls. Later they made rendezvous for the next night, which of course they never kept. Then before dawn, they took a van back home and slipped into bed before my grandmother woke up. 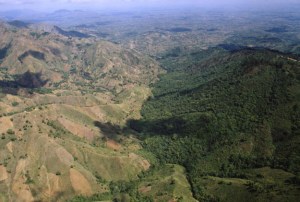 Georges Anglade, a Haitian-Canadian, was a founder of the Université du Québec à Montréal and the minister of public works in the first government of Jean-Bertrand Aristide. He and his wife died yesterday when their home in a suburb of Port-au-Prince collapsed.

The deforestation brigade, specially created in the engineering section of the Armed Forces and trained to use the woodcutter’s mechanical saw, spread throughout the country in search of all the wooded areas that would incite an armed rebellion. This delirium of rebel invasion had reached its height at the eastern boundaries of the country, where a strip of cleared land two kilometers wide ran along the three hundred kilometers of common border with the Dominican Republic, destroying an ancient forest of millions of majestic trees. If at least these trees were falling to become love-letter paper, newspaper pages, tickets out of prison, schoolbook chapters, pages for leisurely reading, bookmarks for collections of short stories to savor one by one (between a glass of rum and a cigar)! But no, these trees were falling just to fall, in the short-sighted view of an all-powerful myopic bumping into the tree that hides the forest.