Here's where Ghajar sits in relation to Lebanon, Israel, and Syria. 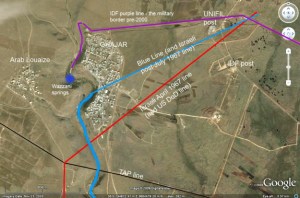 Red Line — The initial Israeli advance after the 1967 war.

Blue Line — When Israel withdrew from southern Lebanon in May 2000, they withdrew their forces south of this line.

Purple Line — Following the 2006 war between Lebanon and Israel, Israeli forces took control of the entire village and established the new boundary along a security fence on this line. The current negotiations surround a possible Israeli withdrawal from the area between the purple line and the blue line.

Bottom map: The hand-drawn lines were provided by Nicholas Blanford

<p> Andrew Tabler is a senior fellow at the Washington Institute for Near East Policy and author of In the Lion's Den: An Eyewitness Account of Washington's Battle With Syria. </p>
Tag: Economics

China's Spy Balloon Is Not a Test of Will

Ukraine Braces for New Russian Offensive in the East

Europe’s brutal conflict has been a harsh but instructive teacher.

A Cluster Bomb Killed My Father

It's time to outlaw these dangerous weapons once and for all.

No Chickens or Cricket Bats

The strange list of Indian products you can't import in Pakistan.