Why the wars on cancer, poverty, drugs, terror, drunk driving, teen pregnancy, and other ills can't be won. 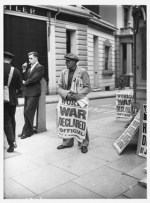 What’s worse: declaring war against a social problem or calling for a Marshall Plan to solve it? Both are enduring and popular metaphors. Unfortunately, both lead to bad government decisions. Public policies shaped by such thinking more often than not result in waste, blind spots, and Manichaean mindsets that limit the search for more effective approaches. Think of the long-running wars on drugs, terrorism, and cancer. The results, all too predictably, have been more confusing than the problems.

In fact, no imitation of the Marshall Plan has ever worked, and no war on a big social problem has ever ended in defeat for the enemy (save, perhaps, cigarettes). But the allure of these spurious comparisons remains as strong as ever. Without any apparent effect, Marshall Plans have been proposed to help Africa, the Middle East, New Orleans, Iraq, and even Wallonia, Belgium’s least prosperous region. Bill Gates wants a Marshall Plan to broaden access to technology, French President Nicolas Sarkozy urges one for his country’s poor suburbs, and the AFL-CIO thinks the U.S. auto industry deserves its own Marshall Plan.

Advocates of war against big problems are just as plentiful. We have been asked to go to war against poverty, drunk driving, email spam, and teen pregnancy, just to name a few. In the United States, liberals denounce the Bush-era “war on science” while conservatives each year mobilize against the “war on Christmas.” And of course, there’s the favorite war of the global chattering class — the war against global warming. “This is World War III,” Barbara Young, then head of Britain’s Environment Agency, declared in 2007. “This is the biggest challenge to face the globe for many, many years. We need the sorts of concerted, fast, integrated, and above all huge efforts that went into many actions in times of war.”

There are many good reasons why declaring war on a social problem or launching a Marshall Plan to help a country or region are such attractive metaphors for politicians. Wars unite countries and stifle internal dissent. Wag the Dog is not just the title of a movie in which a war is manufactured to rally support for a government, but also an age-old political tactic. The war metaphor is also attractive because real wars — those between nation-states as opposed to those against concepts or bad socioeconomic trends — are finite. University of Notre Dame scholar Daniel Lindley has found that the average length of a war is 308 days when the country that starts it wins and 660 days when initiators lose. No surprise, then, that the war metaphor keeps getting deployed: It boosts expectations that in a few years a major scourge — cancer, terrorism, poverty — will be eliminated. “War” also holds the seductive promise of an open checkbook for the politicians who so liberally apply the term; after all, budgetary constraints tend to disappear during war along with all those pesky rules. Wars are for heroes, not for accountants who limit the resources needed for victory.

The Marshall Plan metaphor has been similarly irresistible, with its implications of massive funding and unquestioning public support. But the original Marshall Plan launched by the United States to help Europe after World War II was neither as financially sizable nor as uncontroversial as proponents commonly assume. (Economist Tyler Cowen estimated U.S. aid, which peaked at around $90 billion in today’s dollars, was no more than 5 percent of the gross national product of the recipient nations.) Still, the plan has come to epitomize a bold, massive — and successful — governmental mobilization.

Alas, these good metaphors yield bad policies. The war on drugs, for example, has been more successful in spawning immense bureaucracies and winning big budgets and partisan political fights than in ending drug use. Decriminalizing marijuana for medical purposes is becoming a popular reform in the United States, and 14 states have already adopted it, with more sure to follow. But do we know if marijuana does indeed have the medical benefits claimed by reformers? No. As a result of the mindset — and the policies — nurtured by the war on drugs, medical researchers have been blocked from access to marijuana and unable to scientifically test the claims. Only now, after four painful and futile decades, is the war on drugs losing support.

The same perils apply to the “war on terror.” As former U.S. National Security Advisor Zbigniew Brzezinski famously noted: “The damage these three words have done — a classic self-inflicted wound — is infinitely greater than any wild dreams entertained by the fanatical perpetrators of the 9/11 attacks when they were plotting against us in distant Afghan caves. The phrase itself is meaningless. It defines neither a geographic context nor our presumed enemies. Terrorism is not an enemy but a technique of warfare.” Indeed, the war on terror was even more spectacularly successful than the war on drugs in securing political, legal, military, and financial blank checks for those waging it. But that, too, is changing as anti-terrorism efforts are now more carefully scrutinized, checks are written with more strings attached, and alternative approaches are tested. Recognizing that language is power, U.S. President Barack Obama took a key first step in banning the bad metaphor. At his insistence, the Pentagon was forced to lose its precious GWOT (global war on terror) acronym and the GWOT mentality that went with it. But as many of his predecessors learned, Obama is finding that wars are hard to exit. Once a war against poverty, crime, or terrorism is launched, announcing a unilateral truce is usually political suicide. Instead, presidents get boxed into absolutist policies in which compromise is impossible and victory is the only acceptable outcome.

But no matter the complications, these wars aren’t going away — they’re just too politically convenient. It took only a few hours after Haiti’s terrible Jan. 12 earthquake for pundits to call for a Marshall Plan. One thing by now is certain, however: Although aid will materialize, a Marshall Plan will not. As we all know but the metaphor users routinely and conveniently ignore, the Marshall Plan’s success was driven by the hard-to-replicate conditions in Europe after World War II, with its highly educated populations, well-developed private sector, and relatively efficient public bureaucracies.

So: Beware the metaphor. All these wars and Marshall Plans are getting the world nowhere. But their frequent use does have a silver lining: At least you’ll know that whenever they are proposed, bad policies will soon follow.